The Austin Central Library—the light-filled home of a cookbook-themed restaurant, 3-D printers, and a dedicated gallery space–is a finalist for the 2018 Public Library of the Year Award. The title, previously awarded in 2014, 2015, and 2016, honors a newly built library that the International Federation of Library Associations and Institutions (IFLA) believes “best combines open, functional architecture with creative IT solutions and also takes into account both digital developments and local culture.” Thirty-five libraries from nineteen countries applied for the award in 2018, and as announced on Thursday, the Austin Central Library is one of five finalists (and the only one from the U.S.).

This year’s finalists, including the Villa-Lobos Park Library in Brazil, which has a wooden structure for relaxing in the center of the library, and the Deichman Biblo Toyen children’s library in Norway, where rooms are designed as scenes from books, are all impressive, but in our unbiased opinion, the Austin Central Library is the clear winner. Previous winners combine both architectural ingenuity and community relevance, like Dokk1 in Denmark, which is accessible from all sides of the building and has a bell that rings every time a child is born in the city, and Craigieburn Library in Australia, which stands out for its strong, simple architectural design. The Austin Central Library fits right in. The 200,000-square-foot building, which opened on October 28, boasts six floors of natural lighting, a view over the tree-lined waters of Lady Bird Lake, fourteen learning rooms, over 100 computers, 150 self-checkout machines, an innovation lab, a 37-foot-tall sculpture inspired by the city’s grackle population, a rooftop garden, and enough space for half a million books—not to mention the Cookbook Bar and Cafe, where every item on the menu is from a recipe in a cookbook.

To select a winner, IFLA members evaluate libraries based on six areas: the library’s interaction with the surrounding area and local cultures, architecture, design flexibility, sustainability features, learning spaces, and digital development. The 2018 Public Library of the Year Award, announced at the IFLA’s annual meeting in Kuala Lumpur, Malaysia on August 28, comes with a $5,000 prize, as well as library bragging rights. 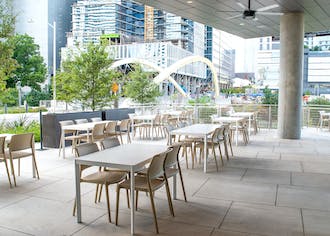