High on the list of life’s unwavering certainties, right up there with death and taxes and an unwatchable Adam Sandler comedy every summer, is the edict that states that Terrence Malick is going to keep us waiting for a new movie. It took the famously reclusive Austin-based writer-director five years to follow his classic lovers-on-the-run debut Badlands (1973) with the elegiac reverie Days of Heaven (1978), at which point he really started taking his time: twenty years passed before we saw his adaptation of James Jones’s war novel The Thin Red Line (1998), and then seven years before the John Smith/Pocahontas romance The New World (2005), and another six before The Tree of Life (2011), a memory piece about nature, grace, and growing up in Texas in the fifties that Malick had apparently been imagining for decades—and which some immediately embraced as his masterpiece.

So upon hearing last summer that a new Malick movie, called To the Wonder, would premiere at the Venice International Film Festival, a mere sixteen months after The Tree of Life collected the top prize at Cannes, the inevitable reaction was one of surprise. When word also emerged that three more Malick projects were already in production (a romance called Knight of Cups, starring Christian Bale and Natalie Portman; an untitled drama starring Bale, Portman, Ryan Gosling, and Rooney Mara, set against the backdrop of the Austin music scene; and a documentary called Voyage of Time about “the birth and death of the universe”), the surprise toppled over into sheer disbelief. Had the 69-year-old artist—whose influence has been especially recognizable in recent years, in movies as disparate as Beasts of the Southern Wild and The Assassination of Jesse James by the Coward Robert Ford—finally broken through a long-standing creative block? What kind of recluse keeps this busy?

Alas, whatever the cause for this newly prolific Malick, the effect is dismal. He needs to return to the editing room—or to whatever corner of the house he goes to let his movies slowly germinate—and salvage his reputation while he still can. To the Wonder (which opens this month in limited release) isn’t merely Malick’s first certifiable dud, a poky drama that seems to be unfolding in its creator’s head as opposed to up on the screen. It’s also the kind of movie that makes those of us who have always felt a measure of skepticism toward the filmmaker—with his sun-drenched imagery, free-associative editing, and existentialist voice-overs—want to shout that the emperor has no clothes. The film uses nothing but tricks that Malick has employed before, this time in the service of a risibly banal story about a disconsolate man and his love affairs with two women—it’s like a Saturday Night Live sketch of a Terrence Malick movie. First you wonder if he has run out of ideas. Then you start to wonder if he ever had any to begin with.

The film opens with voice-over narration, like many of Malick’s works, though this time it’s in French and even more baffling than usual: “Newborn. I open my eyes. I melt. Into the eternal night.” The speaker is Marina (Olga Kurylenko), a single mother who falls in love with Neil (Ben Affleck), an American visiting Paris. They travel together “to the Wonder”—the Normandy island of Mont-Saint-Michel—and then Neil convinces Marina to return with him to Bartlesville, Oklahoma, where he works as some sort of environmental inspector (albeit one without a boss, an office, or anything resembling a normal work schedule). After twenty minutes or so of French mumbo jumbo, the voice-over suddenly switches to Spanish, courtesy of Javier Bardem—with a haircut even worse than the ones he sported in No Country for Old Men and Skyfall—playing a Catholic priest who appears to be in the throes of a vaguely explained spiritual crisis. “Everywhere you’re present,” he announces. “And still I can’t see you. You’re within me. Around me. And I have no experience of you. Not as I once did.” Soon after that, Rachel McAdams enters the proceedings as Neil’s childhood sweetheart, Jane, and she and Affleck wander through wheat fields and nuzzle each other’s necks. For a more complete description of the plot, you’ll have to consult Malick himself—though I suspect even he might have a hard time explaining these characters’ fondness for huddling beneath gauzy curtains as a prelude to lovemaking, or why the priest’s life appears to be transformed after a conversation with a stained-glass-window washer.

Criticizing Malick for pretension is about as useful as blaming a duck for quacking; his most captivating sequences over the years—the locust swarm in Days of Heaven, the lyrical opening movement of The Tree of Life—generate tremendous power through grandiosity and by trying to place ordinary lives in a cosmic context. But To the Wonder suggests an artist running on the fumes of his own artifice. Malick uses virtually the exact same visual syntax he developed in The New World and The Tree of Life, his hand-held camera chasing after the actors or swirling around them or pointing directly at the sun. As with Days of Heaven, large sections of the movie seem to have been shot during the “magic hour,” the final hour of the day before sunset, and although it’s mildly intriguing to see this ethereal style applied to a modern-day, suburban American setting, ultimately it just comes off as silly (you’ve never seen a Sonic or an EconoLodge look quite this ravishing).

If you’ve long suspected that Malick has little interest in actual human beings—and would much rather be filming leaves undulating in the wind—consider what he does to poor Affleck, who has almost no dialogue and spends nearly the entire film glancing dolefully at his co-stars. (Then again, I suppose Affleck fares better than Rachel Weisz, Jessica Chastain, Amanda Peet, and Barry Pepper, all of whom reportedly shot scenes for the film that ended up on the cutting room floor.) And if you’ve wondered whether Malick’s high-flown visuals and portentous silences have mostly served to obscure the fact that, at heart, his stories are sort of dopey—think of the Daddy-didn’t-love-me melodrama of The Tree of Life or the war-is-a-bitch lament of The Thin Red Line—well, here we arrive at rock bottom. Boy-meets-girl, boy-loses-girl, boy-meets-new-girl, boy-eventually-decides-first-girl-was-his-soul-mate, et cetera, et cetera.

Is the acclaim Malick has enjoyed over the years ultimately bound up in his mystique? If you take away that mystique, does the entire legend collapse? As a culture, we love our recluses—Brian Wilson, say, or Thomas Pynchon—and tend to exalt their newest works as if they were the word of Moses coming down from the mountain. Malick’s reputation has been especially burnished by a younger generation of filmmakers and their dreamy, elusive movies, among them Benh Zeitlin (Beasts of the Southern Wild), Andrew Dominik (The Assassination of Jesse James), David Gordon Green (George Washington), and Carlos Reygadas (Silent Light).

But the more we see of both Malick and his copycats, the more it all starts to seem like affectation: How many times can you listen to preteens spouting ersatz poetry or insects buzzing portentously in the air? I suppose there’s something poignant and even laudable about an artist, so late in life, trying to go toe-to-toe with those who have arrived to replace him. And the case on Malick is far from closed: maybe the three other films he’s working on will prove To the Wonder to be just a momentary lapse in judgment. Here’s hoping that, at the very least, he takes his sweet time with them in the editing room. 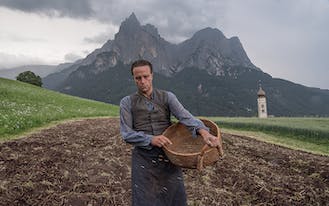