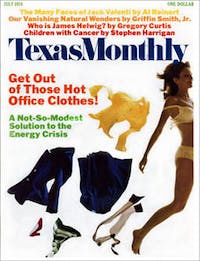 Senusret wore a kilt to work. A short linen kilt and the white crown of Upper Egypt. Nothing more.

The well-dressed pharoah of 1974 B.C. chose his wardrobe to accommodate the ferocious summer heat of the Nile Valley-weather that was not (if both temperature and humidity are considered) much more oppressive than San Antonio in July. Un­equipped with air conditioning, he recognized quite matter-of-factly that even formal cloth­ing should make concessions to the reality of a torrid climate. He was not the first of his line to reason so, nor was he the last; similar dress characterized the Egyptian royal court for eleven hundred years.

Other civilizations have learned independ­ently the same sensible lesson. The Etruscan with his flowing cloak; the Greek’s Ionic chiton shirt, open-sleeved and spacious; togas arranged in cascading mantled folds, the pride of patrician Romans. Hot weather and loose garments have ordinarily gone to­gether as fashion adapts to utilitarian demands.

Not so in America. What are we to make of the thousands of business suits that arrive regular as clockwork in downtown office buildings each weekday morning? In a Texas summer can this be happening, where tem­peratures break 90 and humidity is not far behind? Senusret would gape. Tightly-buttoned collars and cuffs hold in the body heat; a strip of colored doth wraps around the neck; trouser legs block circulating air; and on top of everything rests a coat.

A coat: another tier of heavy fabric to keep the torso warm. Of all human wonders, one of the strangest must be the sight of normally rational men tightening their ties and putting on an extra layer of clothing before they emerge into the furnace of a Texas summer. Women in liberated pants suits recapitulate the same performance. Why are we doing this to ourselves?

That question may already have an extra piquancy in Austin, Corpus Christi, San Antonio, and neighboring towns that depend on shaky Coastal States Gas supplies for the energy that eventually drives their air condi­tioners. But as power becomes scarcer and more expensive everywhere, all of us will have to re-examine this; absurd and implausi­ble attire. Mr. John Sawhill, our energy czar, has recommended that we discard the business suit in favor of sport shirts and slacks while our thermostats are set at 78-to-84 degrees; who would venture to predict when they will be reset to Scandinavian coolness? A few more years of this and the business suit will be as justifiably obsolete as the Edwardian frock coat or the starched ruff collars and winged lace rebatos of Elizabethan England.

The modern business suit is the lineal descendant of the late eighteenth century hunting coat. That coat in turn can be traced directly to the whim of King Charles II, who was captivated by a Persian jacket that caught his eye. The year was 1666. Diarist Samuel Pepys noted: “This day the King begins to put on his vest… being a long cassock dose to the body of black cloth … and a coat over it.” It was a rare recorded landmark in men’s fashion.

Three centuries later the government of Her Majesty Queen Elizabeth II classified the city of Houston, Texas, as a foreign service “hardship post,” like Calcutta, because of its stifling muggy weather. The consul never­theless continued to wear a business suit because that is what the natives wore.

Men’s clothing has for centuries owed more to hierarchical class consciousness than to practical logic; the business suit exists partly as proof that the wearer is not—and indeed is incapable of being—a manual laborer. It is an emblem of rank made de­liberately unsuitable for sweaty activity. In the drafty rooms of chill and cloudy Europe where it evolved, such apparel made good sense. In the high-rise office buildings of sweltering Texas, we have expended fabulous amounts of energy in creating an artificial environment to indulge ourselves in the il­lusion that we are still Europeans and can dress accordingly. When things get sweaty indoors, we may finally recognize that il­lusion for what it is.

Anticipating that day, Texas Monthly ex­plores some new directions in business wear. The fashion industry itself lags behind Mr. Sawhill: advertised solutions to the steamy summer emphasize (what else?) suits of seersucker, texturized polyester, and Italian silks. There on the mannequin the suit re­mains secure, coat and all: steadfast, oblivious to the sticky air, the doomed dodo of the fashion world.

For answers to our dilemma we look in­stead, humbly, to those countries that have not enjoyed the benefits of air conditioning as long as we. And the results, we think, are refreshing.