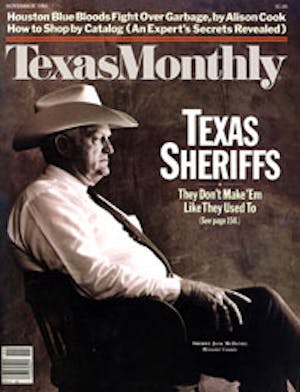 Old-timers were comfortable with the supernatural and referred to the luminous apparitions that dance in the nighttime sky of far West Texas as ghost lights. Moderns call them simply the Marfa lights, implying that if they exist at all, the march of science and technology will soon explain and dispatch them.

I promise you, something’s out there. I was with a group of writers and poets, skeptics all, who saw them in August 1983. We were parked on U.S. 90 about halfway between Marfa and Alpine, looking south across an abandoned air base toward the Chinati Mountains. When the first point of light appeared where there had been only darkness, there were some nervous giggles and a fluttering of rationalizations, and when a second came dancing above and to the right of the first, I swear something ice-cold moved across my skin. The points of light appeared one or two or sometimes three at a time, about the intensity of second-magnitude stars, moving diagonally and sometimes horizontally for ten to fifteen seconds. They would vanish and then reappear in some new location. They could have been a mile away, or twenty or thirty. True, there were some ranch houses out there in the blackness, and some unmarked roads and a Sante Fe railroad track. There was even a major highway, U.S. 67, which runs from Marfa to Shafter to Presidio, but it was many miles to the west of where we saw the lights. No one spoke for a long while. Somewhere out there an animal wailed. San Antonio poet Naomi Nye told me later that she thought the experience changed her life. She said she had dreams in which the whole energy of the dream was directed at trying to figure out how to “get to the lights.”

People have been mystified by the Marfa lights for more than a hundred years and probably much longer. An engineer surveying for the Southern Pacific triangulated the lights in 1883 and declared them to be kerosene lanterns on the ranch of one Jesús Rojas. The less pragmatic knew better.

There was considerable consternation when a Sul Ross State University physicist, Donald Witt, announced ninety years later that he had solved the mystery once and for all. Witt concurred with the Southern Pacific engineer that one source of light indeed originated at the ranch, now called the Mellard or M.E. Ranch. A second source, he declared, was U.S. 67, and he invited a number of skeptics to his lab to see a presentation of evidence. Steve Neu, of Alpine, then a student, was there when Witt unveiled his coup. “There was great expectation as he opened this box,” Neu says, laughing. “It contained an auto headlight.” That explanation satisfied no one, including Witt, who continued to be obsessed by the mystery. Another encounter with the inexplicable on one cold night in January 1974 convinced Witt that his announcement had been premature. As he and an assistant were returning to Alpine, they were stunned to observe two bright yellow lights oscillating near the horizon. “I can’t explain what we saw that night,” Witt admits now. “It occurred to me that it could be the lights of a locomotive on the Ojinaga-Topolobampo run. Of course, that would have been eighty miles away. I never checked to see if there was a train at that hour.”

Uranium, mica, phosphorescence, even luminescent brush on a jackrabbit’s fur, have been suggested, as have chemicals left behind by the Army. One of the weirdest theories is that an ultrasecret “nuclear laser fusion device” went awry in 1943 and got lost in space and time. More recently, astronomers from the McDonald Observatory have speculated that the lights are caused by the Novaya Zemlya effect, in which light beams are bent by adjacent layers of air and carried over great distances. The source could be a faraway car or the reading lamp from a flying saucer, for example.

Early settlers thought the lights were the spirit of a Chisos Apache warrior left sealed in a cave to guard stolen gold. Later the lights were said to be Pancho Villa moving supplies across the Rio Grande. And still later some thought they were the ghost of Hitler searching for former German soldiers who had been imprisoned at a POW camp south of town and had refused to return to Germany after the war.

“Whatever they are, I’d definitely classify them as friendly,” says Fritz Kahl, who trained pilots at the air base in the forties. I agree. And if someone has an explanation, I’ll listen. Meanwhile, I’m just glad the lights are on our side.