Fun Fun Fun Fest is one of the most celebrated music festivals in the country, and for good reason. Other fests aim to hit the largest market possible, but the Austin-based event caters to a very specific crowd—people with nostalgia for classic underground bands, an affinity for up-and-coming rappers, and a passion for headliners who may not (or may) have topped charts with an array of hit singles, but who are definitely a lot of people’s very favorite artist. On the festival’s ten year anniversary, they delivered on such musical curio, along with an impressive line-up of comedy acts. We were on the ground at this year’s fest, and here’s what we found:

The strangest proposal maybe ever
When you think of romance, Canadian singer Peaches probably isn’t the first soundtrack you’d pick. She’s noted for raunchy, sex-driven lyrics that would make any of the comedians at the festival blush, but that didn’t stop two lovebirds from getting engaged during her Friday night set. OK, of course couples can find special meaning in songs that aren’t sappy, starry eyed love ballads. But something about getting asking someone to spend the rest of their life with you while on top of a gogo podium where, seconds before, a man wearing nothing but thin leather straps had been gyrating, seems like a bizarre choice. Not to mention that the singer—the first person to enthusiastically inform the crowd that “He said yes!”—had crowd surfed in a giant inflatable phallus earlier in her set. Despite all of this, the woman next to me covered her mouth as tears welled in her eyes, proving that love really does conquer all.

Joey Bada$$
The 20-year-old New York rapper brought his decidedly old-school approach to hip hop to the Fun Fun Fun Fest blue stage on Saturday afternoon. Paired with hotshot DJ Statik Selektah, young Mr. Bada$$ ran through a set in which he attempted to lead the crowd in chanting sentiments like “Cash ruined everything around me” four hours before the Wu-Tang Clan would be on the same stage, expressing a similar viewpoint. Still, the cramped nature of the blue stage made for a seemingly laconic gathering, which led the rapper to call for his “day one fans” to make their way to the front. That request was honored by those in the area who didn’t self-identify as such, as they mostly stepped back and allowed the big-time Bada$$ lovers to get up close and personal with the rapper when he dropped bangers like “No. 99.” 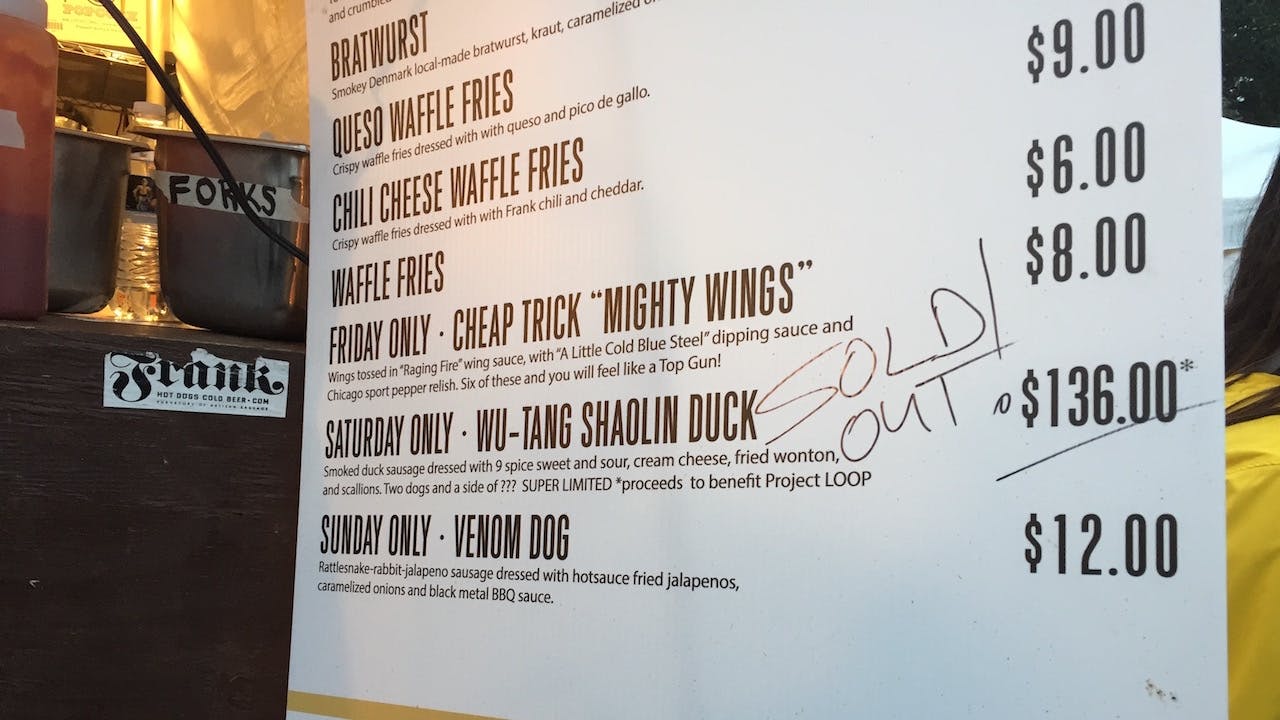 Austin’s hot dog restaurant Frank has made headlines in the past for its willingness to sell ridiculous(ly expensive) hot dogs, and the $136 Wu Tang Shaolin Duck sausage on sale at the food court Saturday lived up to the legacy. The dog featured smoked duck sausage, nine-spice sweet and sour sauce, cream cheese, fried wontons, and scallions, all on two dogs with “a side of ???” The supply was limited (and the proceeds from the sale will fill the coffers of the educational non-profit Project LOOP) which was apparently enough to convince some sausage enthusiasts with extra C.R.E.A.M. to blow to give it a shot—the stand was sold out of them by four o’clock.

Anarchy Championship Wrestling
One of the things that makes Fun Fun Fun Fest so, er, fun is that even if you need a break from music (or the ever-growing comedy presence), there’s plenty of entertainment to be had at the festival. For instance: Anarchy Championship Wrestling! The local Austin wrestling promotion is a steady presence at the festival, and for several hours each day of the festival, boozy pro wrestlers take to the squared circle to give fest-goers something completely different to watch. Even if you’re not necessarily the most pro-pro wrestling person in Texas, the ability to just stroll around the festival grounds and watch something like that happening live and in front of you continues to set Fun Fun Fun apart.

Jane’s Addiction
Perry Farrell is 56 years old, and when he took the stage flanked by three mostly-naked ladies in lingerie (one of whom, to be fair, is Farrell’s wife), he sure did look it. Fortunately, his band didn’t sound that old, as they delivered one of the tightest and most intense sets a rock band brought to Austin for the festival. The band tore through the third-best album of their seminal late 80’s/early 90’s run (of three), Ritual de lo Habitual, and from the opening stomp of “Stop!” to the crowd-pleasing singalong of “Been Caught Stealing” onto the swirling “Classic Girl”—on through a quick tour of non-Ritual hits “Mountain Song,” “Ocean Size,” and “Jane Says.” Even with the Perry Farrell Midlife Crisis Dancers serving as a tacky distraction from how great they sounded, Jane’s Addiction is still a powerhouse live band.

Uncomfortable twerking
Before she took the stage to do a little bit of her own twerking, New Orleans bounce master Big Freedia gave the Sunday crowd the dance lessons she should’ve given Miley Cyrus. Freedia went over the basics, such as side-to-side hip shaking, and eventually moved on to more complicated moves like the Peter Pan. It’s safe to say that most of the class didn’t pass with flying colors like her back-up dancers, though. Aside from the handful of volunteers Freedia was ordering around like a drill sergeant on stage, the crowd seemed generally hesitant to do anything more than a modest rump shaking. After all, there’s nothing more horrifying to a crowd of primarily white hipsters, packed to the gills under a tent, than asking them to shake their butts without abandon.

Doomtree
One of the joys of Fun Fun Fun Fest is that, even if you wait to start your day until the sun is down, you can still get a whole lot of music out of that wristband—once the “outdoor festival” portion of the fest ends, the “mini-SXSW” part begins, as a number of downtown Austin clubs play host to late-night performances from the festival’s artists (and some stragglers who skipped the daytime sets). One of the highlights there was by the Minneapolis rap collective Doomtree, who took the stage with four rappers (one of the five emcees in the group skipped the trip to be with his two-day-old baby), two DJ’s, and a live drummer—bringing a high-energy rap set to Red River’s Sidewinder that ran through both the individual rappers’ solo material and tracks from the collaborative albums No Kings and this year’s All Hands. An hour may not have seemed like enough, but that’s why they play during the day, too.

Ms. Lauryn Hill
If you’re the type of person to insist on being referred to with an honorific, confidence is likely not an issue. That’s exactly why Ms. Lauryn Hill was the perfect person to take over D’Angelo’s Sunday closing set after he bailed a few weeks before the festival. There was not one moment of her set where the singer sounded like a plan B, casting doubt that even D’Angelo could have filled in for himself at such a level. Hill was uncharacteristically punctual to her 90-minute set, which she packed in with over 30 songs delivered both from a couch and as she stalked the stage puppeteering her massive backing band. She sailed through covers that ranged from whimsical (Bob Marley’s “Could You Be Loved”) to towering (Nina Simone’s “Feeling Good”), but it was her own material that made the set truly breathtaking. “(Doo-Wop) That Thing” might have been the obligatory closer, but it was the stunning “Everything is Everything” she played just before that was the true mic drop moment.