“He’s the daddy when he does that.”

—Dallas Cowboys owner Jerry Jones commenting on quarterback Dak Prescott’s apparently paternal stiff-arm, which was on full display during the Cowboys’ win over the Washington Redskins on Thanksgiving, according to the Fort Worth Star-Telegram. No one is really quite sure what, exactly, Jones’s oddball “daddy” comment means—including Prescott himself. “I don’t know what that means,” Prescott told reporters. “I have no kids. Don’t want any.” 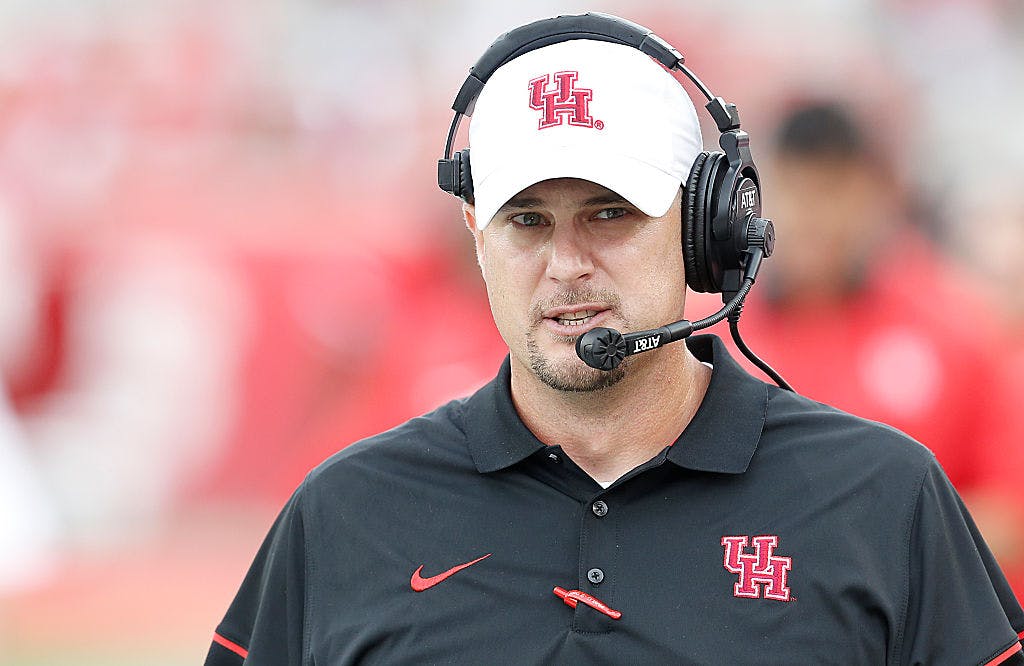 Coaching Carousel
As expected, University of Texas at Austin’s head football coach Charlie Strong was fired following Friday’s game against TCU (which was yet another disappointing loss for the Longhorns). Strong lasted just three seasons at Texas, finishing his tenure with a 16-21 record. Despite shepherding the Longhorns through the program’s losingest stretch in more than two decades, Strong still maintained the respect of his players, staff, and university officials, as the Austin American-Statesman notes. In statements, Athletic Director Mike Perrin said Strong “represented The University of Texas with class and dignity, and he demanded our student-athletes do the same by adhering to his system of core values,” and university President Gregory Fenves called Strong an “outstanding leader and role model who worked hard and with great integrity.” Those qualities, while admirable, weren’t enough to save Strong’s job, and he was officially let go Saturday morning. It only took the Longhorns, like, two hours to find Strong’s replacement in former University of Houston head coach Tom Herman, a guy who had long been rumored to be the Longhorns’ first target in the event Strong was fired. The Statesman called Herman “the hottest coach in college football,” and it’s hard to argue with that—before he took the UT gig, Herman was reportedly being pursued by LSU and other big-time programs, and in two seasons at UH he led the Cougars to a 22-4 record, including a perfect 6-0 against opponents ranked in the top 25. According to the Houston Chronicle, Texas has been considered Herman’s “dream job” for quite some time, so it wasn’t a surprise that Herman took off for Austin. “Let’s be honest. Texas is the only school in America that truly has its own network, the Longhorn Network with ESPN. Texas is Texas,” Tilman Fertitta, chairman of Houston’s board of regents, told the Chronicle. “As great as the University of Houston is, it’s not the same opportunity. It was an opportunity he couldn’t pass up. You have to grab things when you want them.” The five-year, $5 million per-year contract Herman reportedly signed with Texas probably didn’t hurt, either.

Finally Actually Innocent
The Texas Court of Criminal Appeals declared that the San Antonio 4 were actually innocent last week, about twenty years after the group of women was first accused of molesting two young girls and convicted on evidence that was later discredited. The four women—Elizabeth Ramirez, Anna Vasquez, Kristie Mayhugh, and Cassandra Rivera—were released from prison in 2013, but this latest ruling officially exonerates them of the crimes they were accused of and gives them the opportunity to pursue compensation from the state for their wrongful imprisonment. In the flawed original trials, the prosecution introduced junk science, homophobia, and even used fears dredged up by the “satanic panic” of the 1980s and early 1990s to get convictions, as the San Antonio Express-News first reported in its 2010 investigation. One of the accusers recanted her testimony in 2012. The group’s fight for justice was also the subject of Southwest of Salem, a well-regarded documentary released earlier this year that is worth watching for a refresher on the controversial case.

Ted Talks
It was a busy weekend for Senator Ted Cruz’s mouth. Things that came out of it include: a stance firmly in favor of the death of Cuba’s Fidel Castro; an attempt to let bygones be bygones in his rocky relationship with President-elect Donald Trump; and a prediction that the nation will erupt in violence should Trump not fulfill the promises he made during his campaign. Cruz, whose father fled Cuba in the 1950s, had understandably strong feels after Castro died on Friday. “I was with my dad when he found out the news that Fidel Castro was dead, and he simply said, ‘Praise God,'” Cruz told ABC. “For a man who has tortured and murdered and oppressed, for so many, it is thankful that he is no longer with us.” In the same interview, Cruz said he’d “do everything I can to help President Trump have an incredibly successful administration.” When ABC brought up a clip of Trump calling Cruz a pathological liar, Cruz deflected, saying he’s “not going to re-litigate the past.” Instead, he’s focused on the future, like making sure the GOP actually does stuff now that it’s in power, or else, according to Cruz, “there will be pitchforks and torches in the streets.”

No Chill
The Alamo is a pretty cool place. Maybe too cool? According to the San Antonio Express-News, the landmark’s air conditioning may be damaging the delicate limestone walls lining the complex’s mission-era church. Apparently the walls are literally coming apart—bits of debris are noticeably falling—all thanks to unwanted moisture. Greg Skarmeas, who’s leading the Alamo’s massive restoration project, told the Express-News that the building’s air conditioning system combined with thousands of very, very moist visitors (that Texas heat, y’all) to create a “vicious cycle” that’s wreaking havoc on the Alamo’s walls. “The building was never intended to be that way,” Skarmeas said. The Alamo has been air conditioned since at least 1961, long after Davy Crockett and company sweatily defended the fortress from an onslaught by the Mexican Army. Even if you forget for a second about their fierce fighting, Crockett’s crew should be remembered just for surviving two weeks in the South Texas heat without A/C. Such bravery.