“I knew that it would get under his skin and drive him crazy. Mission accomplished.”

—Mark Cuban to a gaggle of reporters before the presidential debate Monday night, according to the Dallas Morning News. Cuban had some choice (read: fire-emoji shade-throwing) words for Donald Trump after the Republican presidential candidate called him “dopey” and a “failed benefactor” following Cuban’s threat to sit in the front row of the debate. The two billionaires have been beefing for quite some time now. 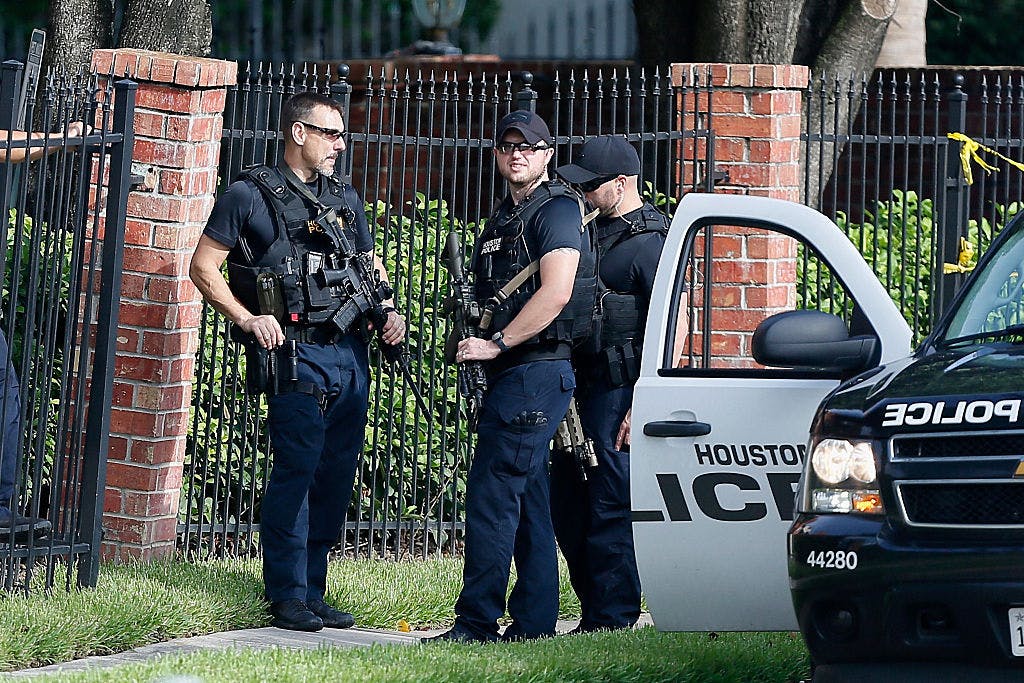 Mass Shooting
A gunman, reportedly wearing a vintage military uniform and Nazi emblems, opened fire in an upscale Houston neighborhood on Monday morning, shooting randomly at pre-dawn rush hour commuters and “anyone he could put his sights on,” a police spokesman told the Houston Chronicle. Nine people were injured in the shooting—six were taken to nearby hospitals, and one reportedly remains in serious condition. The entire ordeal lasted for nearly an hour, terrifying residents in Houston’s West University Place community who were confused at the sound of gunshots cracking through their usually safe neighborhood. According to police, the shooter was 46-year-old Nathan DeSai, an attorney who ran a small law firm in Houston. He was shot and killed by police at the scene. DeSai was armed with a .45 caliber handgun, and, according to the Chronicle, police found 2,600 rounds of ammunition and a Thompson submachine gun in his black Porsche convertible, parked near where he was shot and killed. A police search of his condominium turned up more Nazi emblems and historic military regalia. Any possible motives are unclear at this point, but the Houston Police Department said it’s working with the FBI to figure out what could have caused the shooting.

Dance-Off
Monday night was “Face Off Night” on Dancing With the Stars, and our former governor Rick Perry and his dance partner were matched up against the Vanilla Ice-led duo in a dance-to-the-death. Okay, so no one actually died, but the the loser of the showdown faces elimination Tuesday night, while the winner gets “immunity” and lives to dance another week. Apparently Perry and Dallas native Vanilla Ice have become close friends during the show. “I like him a lot, but Monday night, for one minute, we ain’t gonna be friends,” Perry said before the show, according to the Austin American-Statesman. Perry danced the paso roble on a rolled ankle (Texas tough!) and managed to snag a solid-if-unspectacular score of 23 out of a possible 40 points. But so did Vanilla Ice, and the judges gave the elderly rapper the edge, putting Perry in the precarious position of having to beg for votes via Twitter during the presidential debate.

Time To Sue
Mohamed Mohamed—father of Clock Boy, a.k.a. Ahmed Mohamed—is suing a slew of conservative pundits and news outlets for defamation stemming from their coverage of his son’s arrest after he brought a homemade clock to school that officials thought was a bomb. According to the Dallas Morning News, Mohamed named pundit Glenn Beck, TheBlaze, FOX Television Stations, Irving mayor Beth Van Duyne, and political commentators Jim Hanson of the Center for Security, Ben Shapiro, and Ben Ferguson as defendants in the lawsuit. “The Mohamed family are peaceful Muslims who have been falsely accused of being terrorists and engaging in a jihad,” the lawsuit says. “The correction must also be made that the arrest and suspension of Ahmed Mohamed was not a stunt and it was not pre-planned, staged or engineered by anyone.” After his story went viral, critics accused Ahmed of playing up his ordeal as part of a “publicity stunt.” Ahmed reportedly received death threats and left the country for nearly one year in order to escape the intense spotlight before returning to Texas last month.

Coach Popowoke
At a team media event on Monday, San Antonio Spurs head coach Gregg Popovich weighed in on social injustice and Colin Kaepernick’s anthem protest, and, in typical Pop fashion, the legendary coach provided a truly thoughtful (one might even say “woke”) perspective. “When somebody like Kaepernick brings attention to this… it makes people have to face the issue because it’s too easy to let it go because it’s not their daily experience,” Popovich said, according to the San Antonio Express-News. “If it’s not your daily experience, you don’t understand it. I didn’t talk to my kids about how to act in front of a policeman when you get stopped. I didn’t have to do that. All of my black friends have done that. There’s something that’s wrong about that, and we all know that.” Regarding the athletes who are protesting, Popovich said, “I absolutely understand why they’re doing what they’re doing, and I respect their courage for what they’ve done.” He also noted that he wouldn’t interfere with any forms of protest his own players may participate in. Pop’s full interview is available over at the Express-News, and it’s worth a read.

Police and fire pensions in Dallas are in trouble WFAA