“Oh we’ve raised one before. But he got mean. Had to let him go.”

—James Henson to KTYX. Henson and his family are currently raising “Bandit the raccoon,” who Henson found while working near his East Texas home in Flint. This isn’t the Henson household’s first raccoon. Apparently wild raccoons have quick tempers—Henson says they’re only good pets for about a year, but after that, they become too aggressive to keep. Good to know. 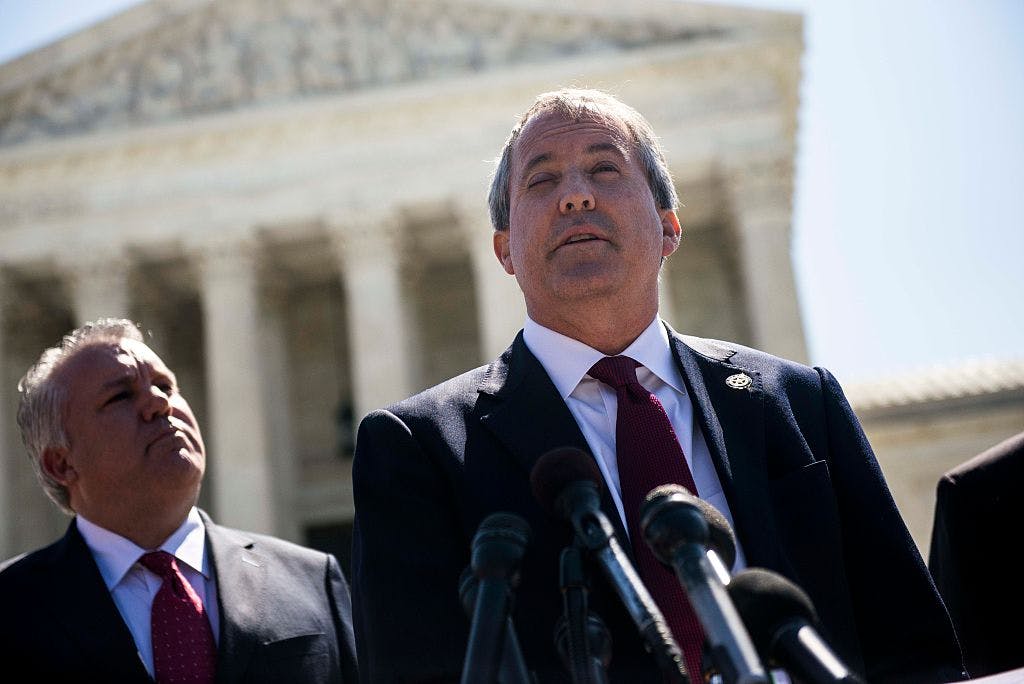 Good To Be Ken
Ken Paxton had a big win on Friday when a federal judge dismissed the U.S. Securities and Exchange Commission’s civil charges against the attorney general. According to the Dallas Morning News, the judge found that the SEC couldn’t show Paxton violated disclosure laws when he told potential investors to get behind a McKinney-based tech company, Servergy Inc., without informing them he was also being paid by the company. “This case is not about whether Paxton had a moral obligation to disclose his financial arrangement with Servergy to potential investors,” Judge Amos Mazzant wrote in the ruling. “This case is also not about whether Paxton had some general obligation to disclose his financial arrangement to his investor group. The only issue before the Court is to determine whether the facts as pleaded give rise to a plausible claim under federal securities laws.” Paxton said in a statement that he was “gratified” by the judge’s decision, but he’s not completely out of the woods yet—the SEC still has the chance to submit more evidence that could bring the civil case back to life, and this ruling doesn’t have any impact on the criminal charges Paxton is facing in Texas for basically the same stuff. As the Morning News notes, the burden of proof is a lot lower in civil court than in criminal cases. If Paxton is found guilty in the criminal case, he could face five to ninety-nine years in prison, according to the Houston Chronicle. “We’re confident that today’s ruling will have no meaningful effect on our ability to prosecute Mr. Paxton,” said Brian Wice, a special prosecutor handling the criminal case.

About That Tape…
An eleven-year-old tape uncovered by the Washington Post on Friday revealed some extremely disturbing comments in which the Republican presidential nominee bragged about sexually assaulting women (during Sunday night’s debate, Donald Trump denied that he described sexually assaulting a woman). “When you’re a star, they let you do it,” Trump said on the tape. “You can do anything. Grab them by the p—y. You can do anything.” Pretty much everyone has condemned his comments, and though a handful of notable Republicans withdrew their support, it hasn’t cost him any endorsements from the Lone Star State. The Texas Tribune has a good breakdown of where Texas politicians stand on Trump right now. Senator John Cornyn tweeted on Sunday that he’s “disgusted by Mr Trump’s words about women: our daughters, sisters and mothers. And I am profoundly disappointed by the race to the bottom this presidential campaign has become.” Senator Ted Cruz, who just endorsed Trump after holding out for so long, said on Twitter that “These comments are disturbing and inappropriate, there is simply no excuse for them. Every wife, mother, daughter—every person—deserves to be treated with dignity and respect.” Governor Greg Abbott tweeted that Trump’s comments were “deeply disturbing,” and “an insult to all women & contrary to GOP values. Absent true contrition, consequences will be dire.” Trump’s comments may not have led to Texas pols pulling their endorsements, but it’s hurting him in his pocket, at least according to the Tribune, which says the candidate is beginning to “bleed” donors in Texas.

Oh, Canada
October was again unkind to the Texas Rangers, who were knocked out of the playoffs in the American League Division Series by the Toronto Blue Jays for the second straight season on Sunday, according to the Dallas Morning News. This year’s matchup was highly anticipated, given the bad blood between the two teams ever since Blue Jays slugger Jose Bautista’s bat flip last October and subsequent slugging at the hands (or, rather, right fist) of Rangers second baseman Rougned Odor in May. There was no fighting this time around, though, as in there were no fist fights between the two rivals and, really, no fight at all shown by the Rangers, who were swept in three games. It wasn’t the best showing for the team that finished atop the American League. The Rangers were eliminated after a fielding error allowed the game-winning run to score in extra innings, and through three games, no Texas starting pitcher allowed fewer than five earned runs. As the Morning News notes, the ERA for the Rangers’s starters was an atrocious 13.94, tying San Diego’s 1984 record for the highest starting rotation ERA in a single postseason series.

Capitol Crime
A 22-year-old man from Fort Worth was arrested this weekend after allegedly scaling the side of the Capitol building in downtown Austin, breaking into a second-story window, and defacing the portrait of former Governor Fletcher Stockdale, according to the Austin American-Statesman. Apparently a DPS trooper saw the whole thing unfold, and now Tanner Christian Graeber faces a couple of felonies after the alleged break-in, which happened at 3:30 in the morning on Sunday. It’s unclear what, exactly, Graeber did to poor, helpless Fletcher Summerfield Stockdale, or why he would target the Civil War-era governor, who was born in “either 1823 or 1825,” according to the Texas State Historical Association. He was governor for exactly three months, filling the vacant post left by Governor Pendleton Murrah, who had fled to Mexico with other Confederate leaders and promptly died there after contracting tuberculosis. After his short stint as governor, Stockdale later “promoted the development of a refrigerator car for shipping beef,” and he married a seventeen-year-old in 1877, when he was 55 (or 52, not that it makes much of a difference). His portrait had been minding its own business in the Capitol gallery since 1946, sitting in peace until Graeber’s recent early-morning arrival.