“Texas may go for Trump, but they have a saying for guys like him: ‘He’s so low, he could put on a top-hat and crawl under a rattlesnake.'”

—Author Stephen King on Twitter. Clearly King is terrified by the possibility of a Donald Trump presidency, but who knew the master of horror is also fluent in Texanese? 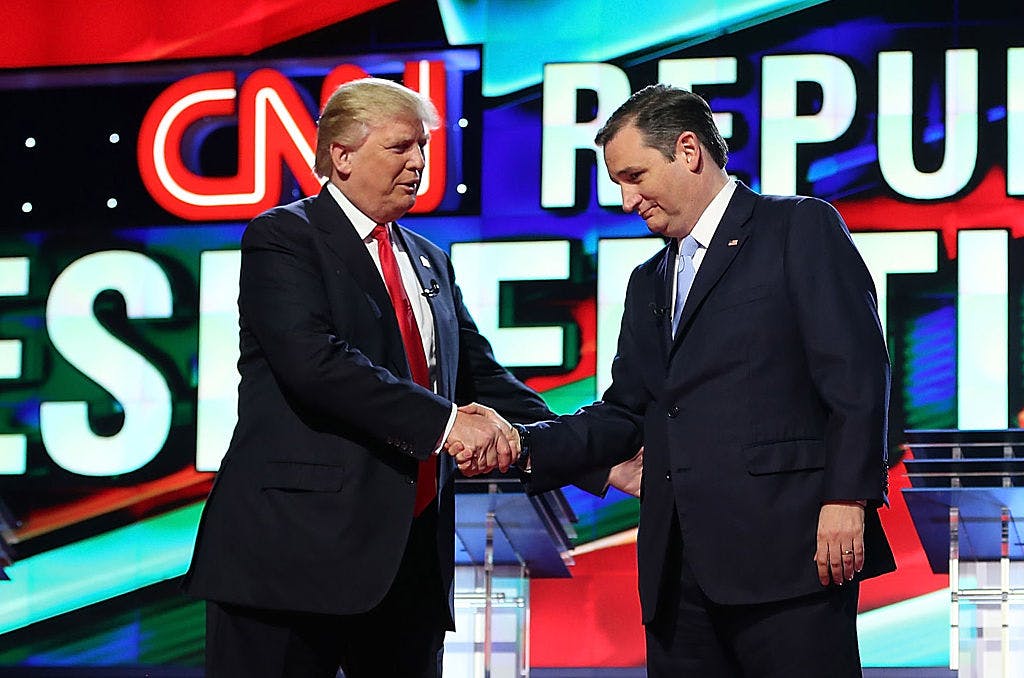 Cruzin’ In Reverse
On Friday, about two months after his refusal to endorse Republican presidential candidate Donald Trump at the Republican National Convention in Cleveland, Senator Ted Cruz announced he would actually be voting for Trump come November, a massive reversal for a guy who once called Trump “utterly immoral,” a “sniveling coward,” a “serial philanderer,” and a “pathological liar.” Oh, and Trump also once essentially called Cruz’s wife ugly and accused his dad of assassinating John F. Kennedy. But since it’s 2016 and nothing at all makes sense anymore, Cruz has endorsed Trump anyway. Apparently, Cruz changed his mind for two reasons: “First, last year, I promised to support the Republican nominee. And I intend to keep my word. Second, even though I have had areas of significant disagreement with our nominee, by any measure Hillary Clinton is wholly unacceptable—that’s why I have always been #NeverHillary,” Cruz said in a statement posted on Facebook. It also looks as though Cruz was at least partially swayed by Trump’s decision on Friday to add U.S. Senator Mike Lee, a Cruz ally, to his list of potential Supreme Court justice nominees. The fact that Trump has held strong against Clinton in national polls could also have a lot to do with Cruz’s decision, because at the time of Cruz’s now-disastrous convention speech, it wasn’t clear if Trump had an actual shot at winning. According to Politico, it took about two weeks for Cruz to make the U-turn, coaxed by some light massaging from Trump’s campaign, particularly his running mate, Mike Pence. Yet Cruz still doesn’t seem completely comfortable with his decision. During an interview at the Texas Tribune Festival on Saturday, Cruz danced around a question asking if he thought Trump was “fit to be the president.”

Starr Speaks
Also at the Texas Tribune Festival, Ken Starr gave a lengthy interview with Texas Tribune CEO Evan Smith, during which the ousted Baylor president awkwardly defended the university’s handling of sexual assault and former football coach Art Briles. According to Starr, there was barely even a sexual assault problem at Baylor. “I’m going to resist the issue, or the characterization, that there was an endemic problem,” Starr said. That’s a weird thing to say, considering the findings of an independent law firm hired specifically to look at Baylor’s issues surrounding sexual assault on campus. Starr repeatedly attempted to defend himself by claiming he was “not privy to all the facts.” Yet when it came time to talk about Briles, Starr still seemed sure about the former head coach’s character. “I have great confidence—to this day—in Coach Briles,” Starr said. “If there was a question of integrity, you fire the person for cause. Art Briles was not fired for cause.” You can watch the full interview here.

Extra Curricular
The Dallas Morning News has a frustrating story about Texas teachers who are forced to work second jobs just to make ends meet. A study late last month showed that a shocking 31 percent of educators in Texas needed to work an extra job in order to put bread on the table, and public teachers here get paid about $6,000 less than the national average. “I need supplemental income, even after 28 years in education,” Angela Snyder, a physical education teacher at an elementary school in Irving, told the Morning News. Snyder said she’s been running a photography business on the side for three years to supplement her income, but she’s still living “paycheck to paycheck.” And Dawn Cardenas, a middle school history teacher in Garland, works about 25 to 30 hours per week selling cosmetics at Dillard’s department store just so her kids can afford to go to college. According to the study by Sam Houston State University, the teachers who moonlight put an average of thirteen hours per week at their second jobs. And 86 percent said they’d prefer to only have the teaching job, but they said they’d need about a $9,000 raise in order to focus solely on shaping young minds.

Hope Springs Eternal
Oil company Apache Corporation made a massive oil discovery in West Texas last month, and while that was a huge stroke of good fortune for Apache, it could be bad news for nearby Balmorhea, home of beloved cool-water springs. “Most in this city of about 500 would welcome the jobs, investment and tax dollars an oil rush would bring; Main Street has more empty storefronts than open businesses,” writes David Hunn of the Houston Chronicle in a thoroughly reported and gorgeously photographed story. “But they also fear their town could be overwhelmed by the influx of people and equipment, and the water that is the lifeblood of the community contaminated by oil and gas drilling.” In an effort to appease the community’s fears, Apache has said it won’t drill on or under the town or it’s famous state park. Still, whenever there’s drilling there’s the possibility of contamination. Concerned Balmorhea residents are left without legal options to stop the drilling, so it it seems as though there not much they can do at this point except cross their fingers and hope for the best.