“This is the pinnacle of our success. I’ve got every alligator park in the country calling to congratulate us on the capture.”

—Gary Saurage to the Houston Chronicle. Saurage co-owns Gator Country, an alligator rescue squad in Beaumont. On Wednesday near Dayton, his team caught a thirteen-foot, eight-inch gator, which is believed to be the biggest gator ever captured alive in Texas by more than a foot. It’s still a half-inch smaller than the gator a pair of bow hunters killed near Dayton (again!) in late September, but this one will get to live out the rest of its days with 450 of its gator friends after being relocated away from humans to a natural habitat in Beaumont. 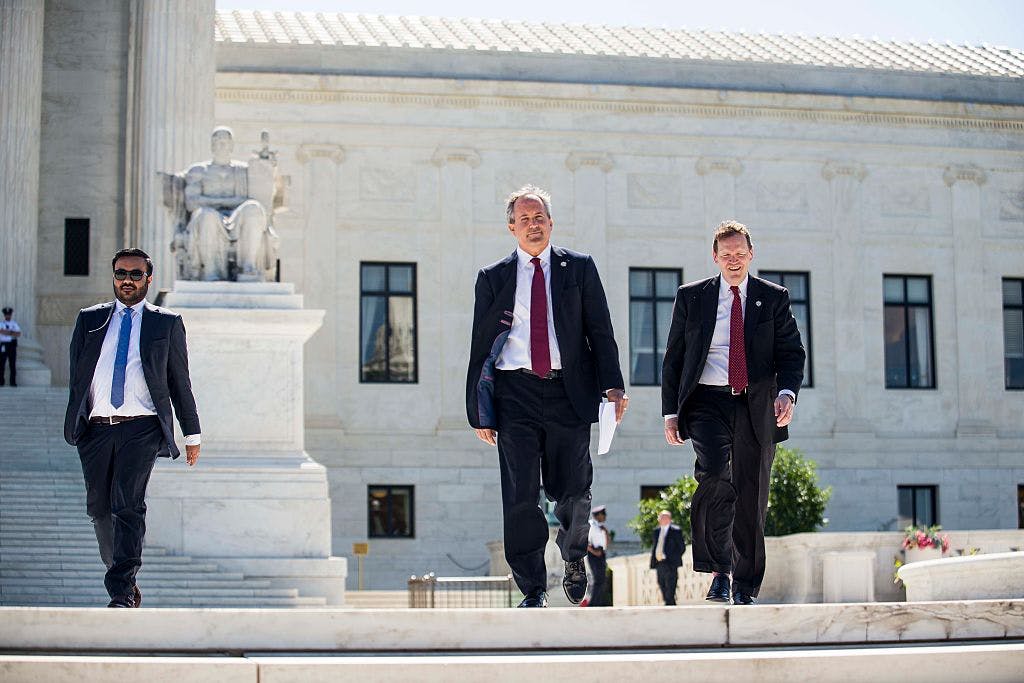 Trial Time
Ken Paxton’s final attempt to have his felony securities fraud charges thrown out was denied by the highest criminal court in Texas on Wednesday, so the attorney general will likely head to trial as early as next spring, according to the Texas Tribune. Last year, a Collin County grand jury indicted Paxton for allegedly recruiting investors for McKinney-based tech company Servergy without disclosing to the potential investors that he was being paid by the company. The Securities and Exchange Commission also went after Paxton with similar allegations in a federal civil lawsuit, but a judge dismissed that case last week. Paxton wasn’t so lucky with his criminal case, and it seems certain the state’s top lawyer will find himself standing in an unfamiliar spot in the courtroom fairly soon. Paxton’s attorneys said they plan to file a motion for a rehearing, but it’s unlikely that’ll sway the judges, considering Wednesday’s decision by the Texas Court of Criminal Appeals marked the fourth time a court has tossed Paxton’s appeals. “Today’s ruling marks an end to Mr. Paxton’s almost year-long attempt to avoid being judged by a jury of his peers,” Brian Wice, a special prosecutor handling Paxton’s case, said in a statement, according to the Tribune. “We look forward to going to trial and seeking justice on behalf of the people of Texas.” According to the Dallas Morning News, Paxton will be tried in Collin County. If convicted, he could face a maximum sentence of 99 years in prison and tens of thousands of dollars in fines.

Slow Down
Texas’s lauded economy might not be all that it’s cracked up to be, at least according to the Wall Street Journal. You can probably guess the culprit behind the Lone Star State’s economic slide: oil. According to the Journal, Texas has hemorrhaged more than 91,000 jobs in oil-and-gas extraction and mining-support activities alone since the end of 2014, and the state’s economy ground to a halt this year after growing 3.9 percent per year between 2010 and 2015. Houston took the biggest hit. The Journal says H-town is “on the brink” of recession. An astounding 70,000 energy-related jobs have disappeared in Houston in the last two years, with more cuts expected to come, and August’s 5.8 percent unemployment rate was nearly a whole percentage point higher than the year before. Vacancy in the city’s skyscrapers has jumped to 16 percent, a five point increase since 2014. The economic strain is being felt everywhere in Texas, from chain restaurants to airlines to the budgets of state agencies. We’d like to end this with a bit of hope, but there really wasn’t a whole lot of that in the Journal‘s article.

Doing Time
Human Rights Watch just released a massive report on the criminalization of drug use in the U.S. The organization took a particularly close look at drug cases in Texas, and what it found was pretty disturbing. According to Human Rights Watch, most of the thirty Texas defendants they interviewed had been arrested for possession of far less than a gram of illicit drugs, sometimes as low as .2, .02,  or even “a result from the lab reading ‘trace,’ meaning that the amount was too small even to be measured.” A defense attorney in Dallas told Human Rights Watch his client was charged for possessing .0052 grams of cocaine, and with the margin of error for the lab at .0038 grams, the defendant could have had as little as .0014 grams on him, which, as Human Rights Watch noted, is 35 hundred-thousandths of a sugar packet. Perhaps the most shocking result from the report is the long sentences doled out in Texas drug cases. According to the report, 116 people got life sentences for drug possession in Texas between 2012 and 2016, and at least seven of those life sentences were given for possessing an amount of drugs that weighed between one and four grams.

Police Problems
A new report shows that Austin police officers are more likely to use force on African Americans and Latinos. According to the Austin American-Statesman, the report by New York-based think tank Center for Policing Equity had previously done a national study that yielded similar results, but Austin is the first police department in the country to have the study done just for a single department. The study analyzed police interactions and also factored in other elements, like income levels and localized crime rates. The report found that for every one percent increase in the proportion of black residents in a neighborhood, there was a 2.6 percent increase in use of force incidents. As The Guardian explains, that’s more problematic than it sounds, considering Austin is a highly segregated city: most of Austin’s west side neighborhoods are less than 5 percent black, while the east side is around 60 percent black, so, based on the report’s figures, that’s a 140 percent increase in use of force incidents in a typical black neighborhood in Austin compared to a typical white one.

Waco’s about to get a surf park Surfline

In a decision so bad you can see its awfulness from space, a Houston Rockets player signed his name on the Great Wall of China Washington Post