“I hoped that it would be taken as an insult. The same way we feel insulted.”

—Ele Chupik to the Dallas Morning News. Chupik called out over Facebook in December for women to mail their used feminine hygiene products to Governor Greg Abbott as a form of protest over the state’s fetal burial rule. According to the Morning News, recently released records reveal that some women did, in fact, follow through, which must have made for some fairly interesting moments in the mailroom. 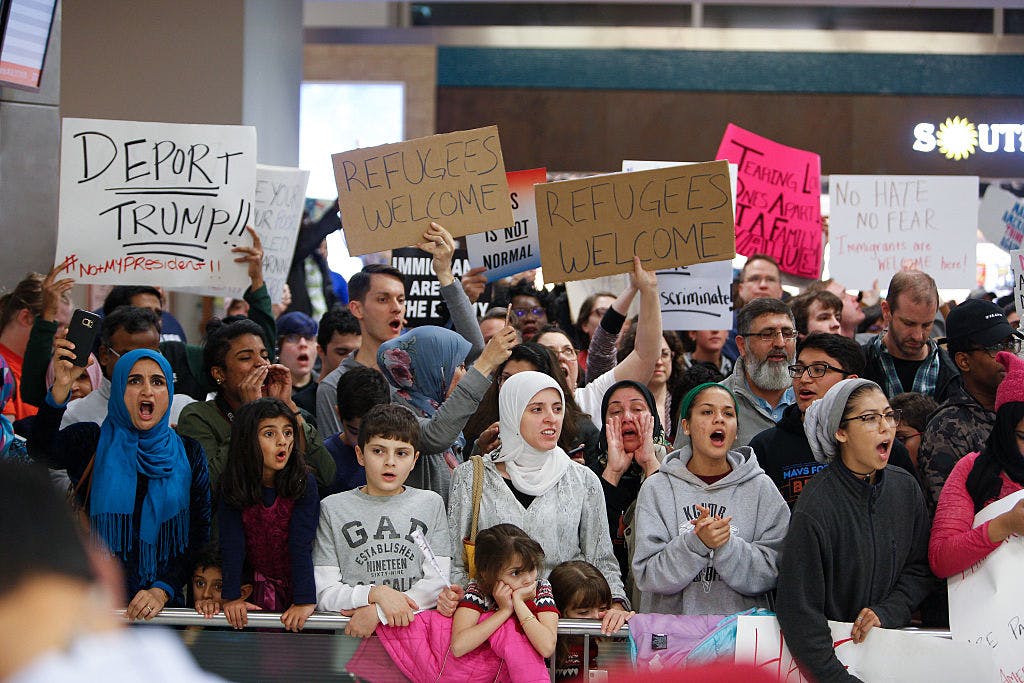 Muslim Ban
President Donald Trump signed an executive order on Friday barring entrance to the United States for people from seven majority-Muslim countries—Syria, Iraq, Iran, Yemen, Somalia, Sudan, and Libya—which resulted in a chaotic mess at airports in the United States and across the globe. U.S.-bound people from those nations, including refugees, students, visitors, and green card-holding legal permanent U.S. residents, were detained, deported, or prevented from boarding their planes, according to the New York Times. The move prompted massive protests of what critics are calling a “Muslim ban,” because it targets majority-Muslim nations and includes a provision calling to “prioritize refugee claims made by individuals on the basis of religious-based persecution, provided that the religion of the individual is a minority religion in the individual’s country of nationality,” which makes it seem as though non-Muslims are exempt. Trump denied that it’s a Muslim ban, though he once called during his campaign for a “complete and total shutdown of Muslims entering the United States,” and top advisor Rudy Giuliani admitted to Fox News over the weekend that Trump said he wanted a Muslim ban. The order has a huge impact on Texas, which, according to the 2010 Religious Census, has the largest Muslim population of any U.S. state, and is also among the nationwide leaders in refugee resettlement. Tense dramas played out inside airports nationwide as attorneys, protesters, and family members gathered to try to secure the release of those who were detained, many who were airborne when the order was issued. As many as fifty people were detained at Dallas-Fort Worth International Airport, while an unknown number were held Houston’s Bush Intercontinental Airport. Among those detained here were a 77-year-old grandmother from Iraq and an eleven-month-old girl who is a U.S. citizen. The family of a former U.S. Army translator from Iraq, who now lives in Plano, is stranded overseas. And an Iraqi refugee was detained in New York’s JFK Airport on his way to reunite with his family in Houston. He is a central plaintiff in a lawsuit the ACLU brought against the federal government, challenging the constitutionality of the order and seeking a stay on deportations—a Brooklyn judge issued a nationwide stay Saturday night, temporarily bringing some relief to only those who were stuck in transit. The Iraqi man was eventually released from detainment, though the judge’s order was reportedly not being followed by Customs and Border Patrol in airports across the country. According to the Times, Trump’s executive order was rushed through without legal review, sowing confusion. The situation remains very fluid. Some Texas lawmakers have spoken out against the ban—mostly Democrats—but the majority have remained silent, according to the Texas Tribune. As for the state’s top political leadership, including Senators John Cornyn and Ted Cruz, Governor Greg Abbott, Lieutenant Governor Dan Patrick, and Attorney General Ken Paxton? Crickets.

From The Ashes
Hours after Trump’s executive order banning some Muslims from traveling to the U.S., a mosque burned to the ground in Victoria. The cause of the blaze is still under investigation, according to the Victoria Advocate, but the timing of the incident is certainly concerning, prompting the news of the fire to make headlines internationally. The general public’s reaction to the fire was swift and refreshingly heart-warming. About 400 folks of all religions, nationalities and political affiliations gathered for a community prayer service outside the ashy ruins of the mosque on Sunday. “It’s made me feel good even though my heart was breaking last night,” the mosque’s Imam Osama Hassan said at the prayer service of the community’s reaction. A GoFundMe account set up to raise funds to rebuild the mosque, meanwhile, has already garnered more than $800,000 toward its goal of $850,000.

Fetal Ruling
A federal judge issued a preliminary injunction on Friday blocking Texas’s fetal burial rule, according to the Austin American-Statesman. In what the Houston Chronicle described as a “sharply critical” 24-page ruling, U.S. District Judge Sam Sparks wrote that the rule is possibly a “pretext for restricting abortion access” with the potential “to deliver a major, if not fatal, blow to health care providers performing abortions,” and said the regulation puts a burden on women seeking abortions that “substantially outweigh the benefits.” Sparks extended an injunction that he had initially ordered before the rule was set to go into effect in December, but this is far from the end of the legal battle between Texas and the women’s healthcare providers who have challenged the rule in court. Attorney General Ken Paxton has already promised to file an appeal seeking to have the injunction overturned.

Moving Mountains (Er, Trees)
The small city of Buda (population 10,209), located just outside of Austin, has a very big problem. In order to begin construction on a new municipal complex, it must first remove a 260-year old, 850,000-pound tree that is sitting in the way. According to the Austin American-Statesman, the removal process will begin sometime this week. Heeding the concerns of environmentally-friendly citizens, Buda’s city council decided to transplant the tree rather than raze it, setting aside a cool $232,167 to move the tree about 600 feet away. It won’t be easy, and the process could take a few days. There will be an area set up so the public can watch the removal, but the Statesman warns that it won’t be particularly exciting: “Don’t expect fireworks… the two-day process will move at a snail-like place.” As for the tree, it should be just fine. The CEO of the company tasked with the removal said the trees they’ve transported have a survival rate of 98 percent.

A journalist from McAllen was arrested while covering the inauguration protests in D.C. last weekend McAllen Monitor