The University of Texas is building a strong case against retailers that attempt to sell merchandise bearing the name of its new head football coach. The Austin American-Statesman reported this week that the university has filed trademark claims for several Charlie Strong-related puns and phrases, including “Stronghorns,” “Texas Strong” and “UT Strong”—and it has also sent at least one cease-and-desist letter that resulted in offending T-shirts being removed from store shelves.

According to the Statesman, the school’s athletics department netted $9 million in revenue from trademark licensing last year—almost as much as the $9.38 million it’s paying Strong in his first year on the job.

The Bottom Line: UT is notoriously protective of its brand and has filed several lawsuits to stop outside businesses from profiting off of its name, logos, and dozens of other trademarks—including miniature replicas of the UT Tower, the word “Texas,” and even the color burnt orange. So if you don’t want to end up in court, stay away from Pantone Matching System 159.

The Rio Grande Valley appears to be getting closer to landing the nation’s next launch site for commercial space flights. California aeronautics company SpaceX has been evaluating locations in several states for more than a year, but the McAllen-based newspaper the Valley Morning Star reports there are indications that the firm is narrowing its sights on an area just outside Brownsville.

According to the paper, SpaceX has already bought about 24 acres of land in the vicinity and leased more than 50 acres. Also, the Federal Aviation Administration is reportedly wrapping up a final environmental impact study that would allow the company to move forward with the project. SpaceX, which “has been negotiating tax abatements, incentives and operating agreements” with local governments and business groups, plans to invest about $73.6 million in the project, the Morning Star reports.

The Bottom Line: The South Texas facility would launch SpaceX’s Falcon-series rockets, which carry “commercial payloads, including satellites or experimental payloads, for delivery to the International Space Station,” according to the newspaper.

A new policy that took effect January 1 is expected to lower the tax bills of thousands of Texas businesses, the Austin Business Journal reports. Companies with more than $1 million in annual gross receipts are required to pay the state margins tax on that revenue. But in last year’s legislative session, lawmakers adjusted the so-called “tax cliff” policy for companies that earn between $1 million and $3.3 million per year, allowing them to deduct $1 million from their taxable receipts. According to the ABJ, that change will generate additional savings for about 26,000 businesses statewide.

The Bottom Line: The Austin American-Statesman reports the margins tax has presented a “year-end dilemma” for many small-business owners: To avoid triggering the tax at the $1 million mark, some companies would intentionally put the brakes on sales as they approached that milestone in the final weeks of the fiscal year.

Winners of the Week: Johnny Football and King James

The budding bromance between departing Texas A&M quarterback Johnny Manziel and NBA star LeBron James blossomed into a professional relationship this week, when the Heisman winner hired James’ marketing manager “to help him with business, media, entertainment and merchandising opportunities,” Businessweek reports. Maverick Carter, the CEO of LRMR Management Company and a close personal friend of King James, will act as Manziel’s marketing agent as he prepares for his NFL rookie season.

In response to the announcement, LBJ tweeted, “Welcome to the family Johnny Football!” and also marked the occasion with Manziel-themed Instagram photo collage.

A federal judge has given an Austin-based food science company clearance to move forward with a patent infringement lawsuit against Monster Beverage Corporation, the maker of Monster Energy drinks. Applied Food Sciences Inc. claims the caffeine kingpin’s use of an ingredient called glucuronolactone in its Monster Rehab beverage line is a violation of AFS’ patent on a “therapeutic agent” that cures hangovers and “reduces alcohol intoxication,” according to the beverage industry website BevNet.

Monster had asked the court to throw out the lawsuit, but the presiding judge denied that request, allowing AFS to proceed with its effort to collect damages. The company has sued two other beverage makers for violating the same patent, drawing settlement offers in both cases. 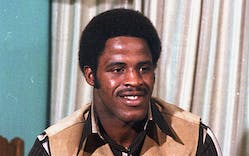 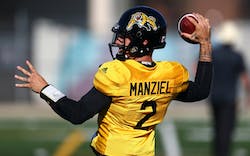 Johnny Manziel and Mike Sherman Are Reuniting in Montreal, of All Places