As far as wastes of money go, vanity license plates are pretty high up there. For $150 a year ($195 if you want a seventh letter), it’s an expensive way to send a message to your fellow motorists. But for every “C-YA GAS” plate on a Tesla or “ALS BENZ” on a Mercedes presumably driven by some guy named Al, there are other plates submitted for approval to the Department of Motor Vehicles that are deemed unsuitable for the roads of Texas.

That’s something we learned thanks to ABC-13 Houston’s inquiry into the plates that have been rejected in 2017. In just two short months, “FART CAN” was joined by nearly 300 other prospective plates in the “reject” pile. Here are our some our favorites: 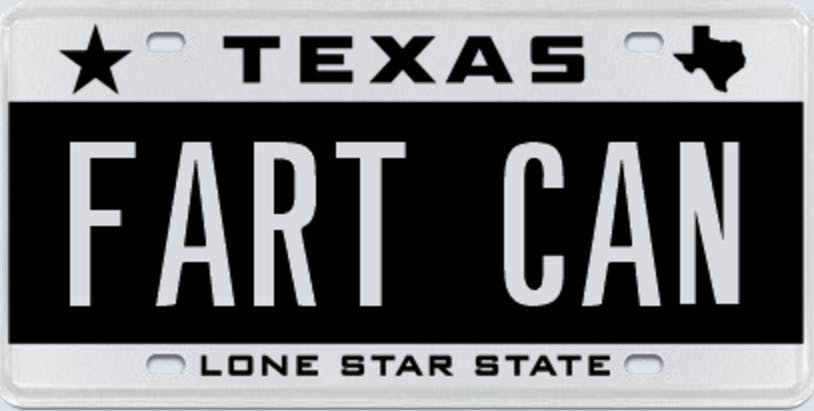 “Fart can” is an objectively funny thing to call your car. It’s definitely not something you’d want to pull up in when picking someone up for a date, but it’s also probably going to give any police officer considering pulling you over a moment of consideration about whether they’re willing to endure whatever happens when the driver of the fart can rolls down the window. 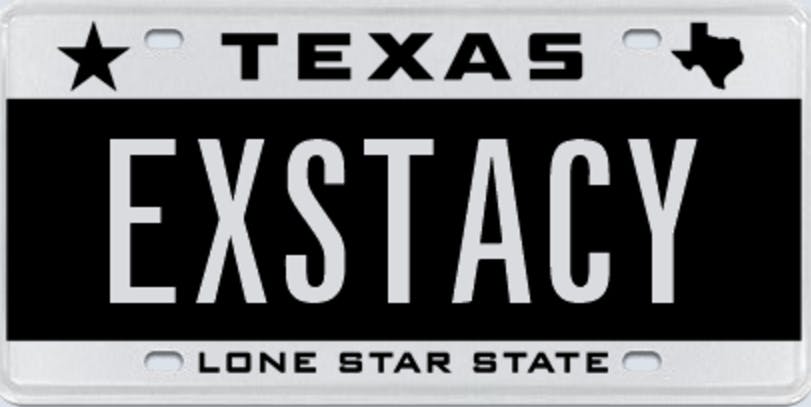 A license plate that reads “exstacy” is probably a reference to the drug “ecstasy,” which means that the person who applied for this plate is most likely an aging Gen-X’er experiencing some sort of midlife crisis. But what if it’s not? Maybe it was submitted by someone who changed their name from “Stacy,” but for some reason wanted to remind the world of that fact. We’ll never know. 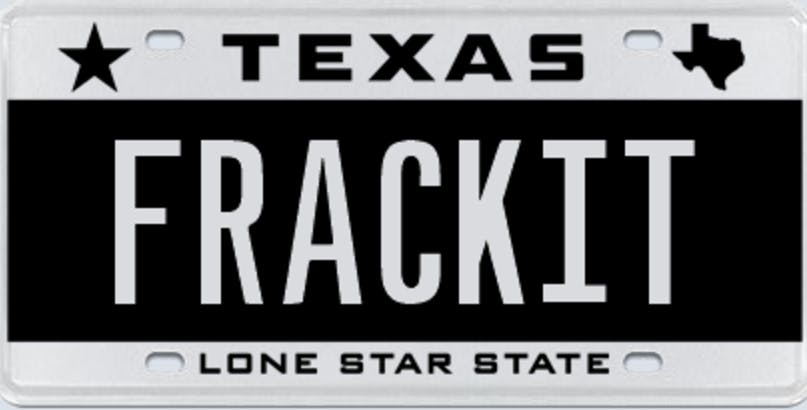 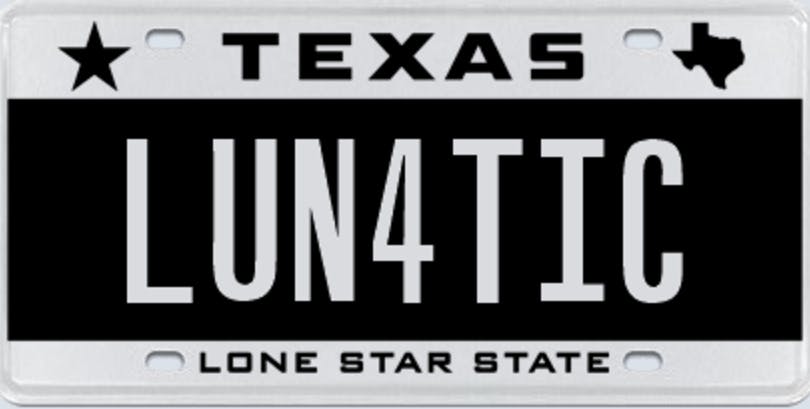 “Lunatic” (or “LUN4TIC,” we guess) is a rude word that has been used to describe the mentally ill. No need to put that on license plate. But if someone sees that word and thinks, “Heck yeah, buddy, that’s me!”, there is some utility in giving them a bold way to announce that to the world. Presumably the Insane Clown Posse stickers on the bumper will serve the same purpose.

There’s a reasonable argument to be made that the state of Texas doesn’t need to be sanctioning political messages about the president of the United States by providing a platform on its official license plates, so it shouldn’t be a shock that “NO TRUMP” was rejected. On the other hand, this person was able to get this plate approved: 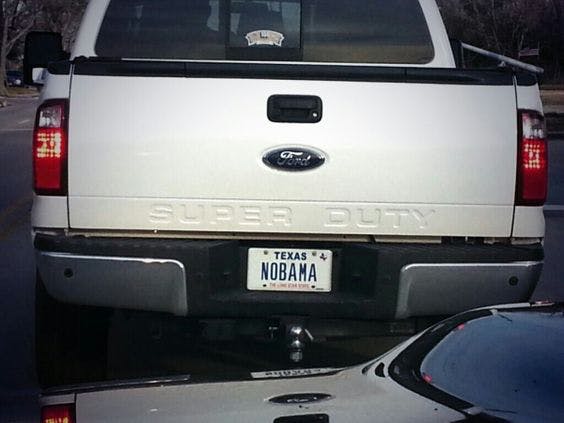 It does seem to be something of a double-standard at play here, but at least there are no shortage of bumper stickers available to Texans who wish to register their opposition to the current president on their vehicles. 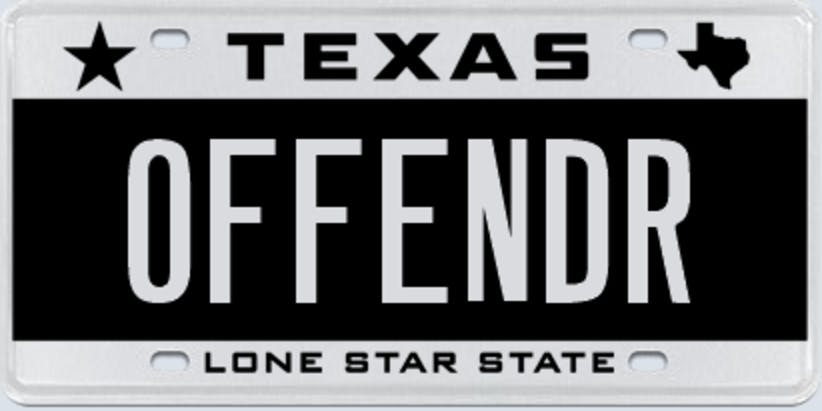 In basically any context, being an “offendr” isn’t something to brag about, so we won’t regret not seeing this on the road. 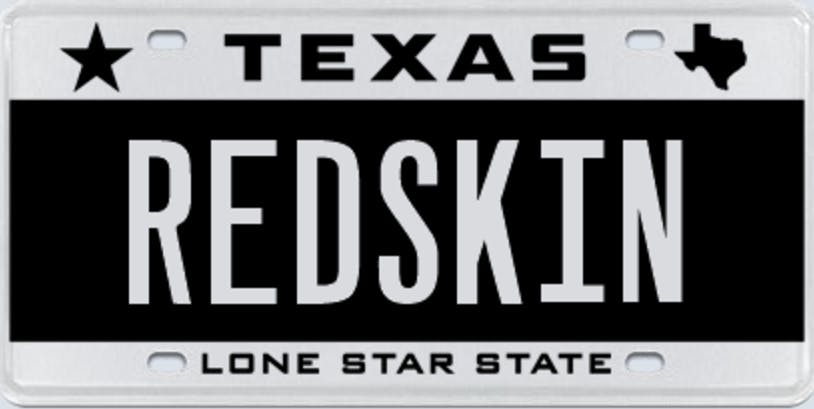 Whether the “REDSKIN” license plate was rejected because the people who make these decisions are Cowboys fans, or because the U.S. Patent Office (and subsequent court decisions) have found the term to be a racial slur, filtering out stuff like this is exactly why there’s an application process.

Some vanity plates require more context than others to understand why they’re offensive. If you’re not big on Internet phrases, “ZEROGVN” is kind of just a random collection of letters. If you are someone who spends their time on Tumblr or UrbanDictionary.com, though, then the phrase “zero given” is just missing a subject, and that subject is an easily Google-able word that probably should be left out of the morning commute. 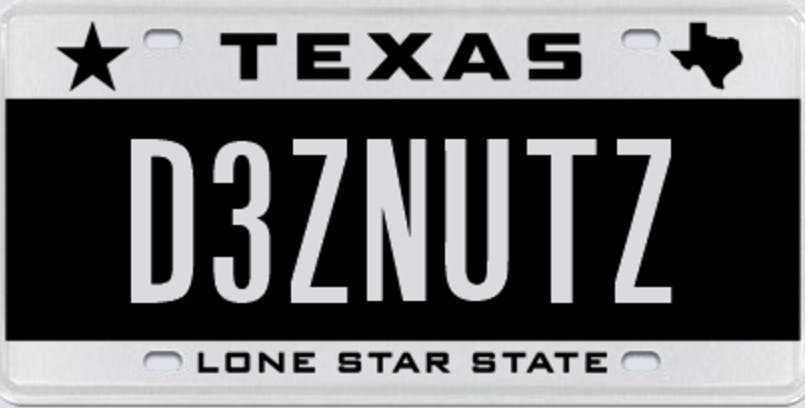 There was a time during the 2016 election season when both Donald Trump and Hillary Clinton were so unpopular that a joke candidate created by a 15-year-old boy by the name of “Deez Nuts” was polling at 9 percent in North Carolina.

Deez Nuts is obviously not the president of the United States, and apparently you can’t even honor what might have been on your license plate.

Why American and Southwest Airlines Canceled Thousands of Flights