Dez Bryant is back with the Cowboys, and the camaraderie between players has been taken to a whole new level. During training camp, Bryant and cornerback Tyler Patmon ended up getting into a little fight, with Bryant saying afterward, “It’s just two great competitors going at it. We were chirping a little bit back and forth, but at the end of the day, that’s what you want.” Social media could not agree more:

Dez and Patmon get into it on the far side. They're still jawing pic.twitter.com/YKcx1i8NmS

If you want a cat (or ten) and live in Houston, then you’re in luck. The BARC animal shelter received what it believes might be a record for a single drop-off: “49 adult cats and 13 kittens.” 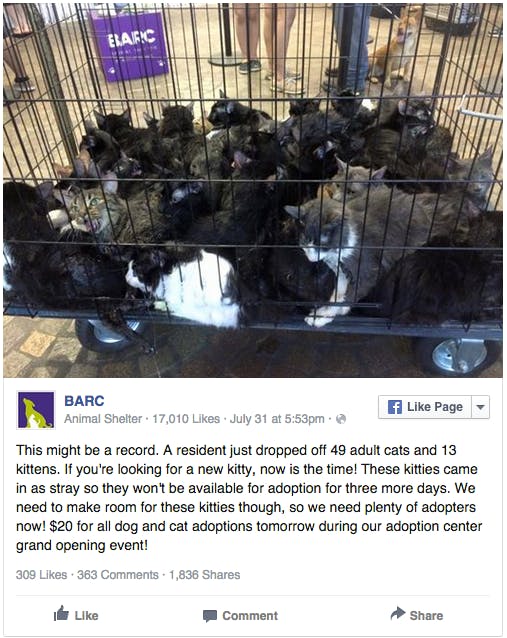 Indicted – Texas really likes its leaders to be possible felons, doesn’t it? Over the weekend, it was reported that Attorney General Ken Paxton has indeed been indicted for “two counts of first-degree securities fraud and one count of third-degree failure to register,” writes the New York Times. As Texas Monthly’s own Erica Grieder wonders, however, “Will the public pay attention, though? The potential third-degree felony charge they mention is, again, the one that Paxton admitted to more than a year ago.” One group that is either not paying attention or, perhaps, making an effort to not pay attention is the GOP. “A day after news broke that a grand jury indicted Paxton on felony securities fraud charges, Gov. Greg Abbott, who was Texas attorney general for 12 years, remained silent. So was GOP presidential candidate and U.S. Sen. Ted Cruz, who was stingy with campaign endorsements in 2014 but praised Paxton, a like-minded tea party favorite,” writes the Associated Press. “It’s a sharp contrast to how conservatives rallied around Perry,” after the Governor’s indictment. Maybe GOP leaders are just looking for the best way to discuss a defendant who as already admitted at least some guilt? Either way, they’ve likely got some time to figure it out. Paxton is expected to turn himself in Monday morning for fingerprinting and a mugshot. “Paxton’s booking, expected to take place in the Collin County Jail in his hometown of McKinney, should be relatively quick and take place outside of the media’s sight,” writes the Austin American-Statesman.

Armed ’Dillo – In a state full of hunters, it seems that a deer is easier to kill than a ’dillo. “An East Texas man was wounded after he fired a gun at an armadillo in his yard and the bullet ricocheted back to hit him in his face, the county sheriff said on Friday,” according to Reuters. “The animal’s hard shell deflected at least one of three bullets, which then struck the man’s jaw, he said.” The would-be ’dillo killer was flown to a nearby hospital. This incredible, and kind of embarrassing, story has gone international, with everyone from the New York Daily News to the BBC reporting on the incident. As the Washington Post points out, attempting to shoot an armadillo has real risks. Just a few months ago, a Georgia man “accidentally” shot his mother-in-law after “he fired his 9 mm pistol at the armadillo. The bullet killed the animal, but also ricocheted off of it, hit a fence, went through the back door of his mother-in-law’s mobile home, through a recliner she was sitting in, and into her back.”

Alright, Alright – We may no longer have the glow of Friday Night Lights on our TV screens, but fear not, Texans, because a new Lone Star show will soon keep you company. Tomorrow is the premiere of West Texas Investors Club, and if that sounds like a rip-off of a Matthew McConaughey movie, that’s because it features Matthew’s older brother, Mike “Rooster” McConaughey. Based on the awesome trailer—which features Rooster throwing an empty beer can, among other things—the show is a combination of Shark Tank, The Amazing Race, and The Simple Life, as Rooster and a couple of other successful roughnecks take a bunch of soft-palmed, citified hopefuls and haze them before giving them money (or something). Will the show be a success? Who knows! But as co-host/millionaire investor Wayne “Butch” Gilliam said, “We’re not as stupid as we look.”

Lone Rider – Roughly 77 days since the Waco shooting, almost every biker is out of jail. Almost. Marc Pilkington is the “last million-dollar man in McLennan County,” as the Houston Chronicle puts it. “Of the 177 bikers charged in Waco for their alleged roles in what police have called a gang war, he is the only person still locked up with a $1 million bail. Two other bikers remained at the Jack Harwell Detention Center last week, but their bail amounts have been drastically lowered.” As the story points out, “Nothing has been made public about what Pilkington or any of the others allegedly did during the clash between the Bandidos and Cossack,” although he does have something of a rap sheet. Still, the lack of transparency has irked pretty much everyone, especially media—sixteen news outlets have filed a brief objecting to the gag order placed on the bikers and their attorneys.

Here’s What Texas Hunters Think of Cecil the Lion

Singularity Took a Baby Step in Austin This Weekend

Remember (and Restore) the Alamo’s Paintings

What Will Happen to McAllen’s Party District?

Monied Political Operative Would Like to Remain in Smoke-Filled Room

Wimberely Continues to Dry Out, Recover