The Worst of the Day 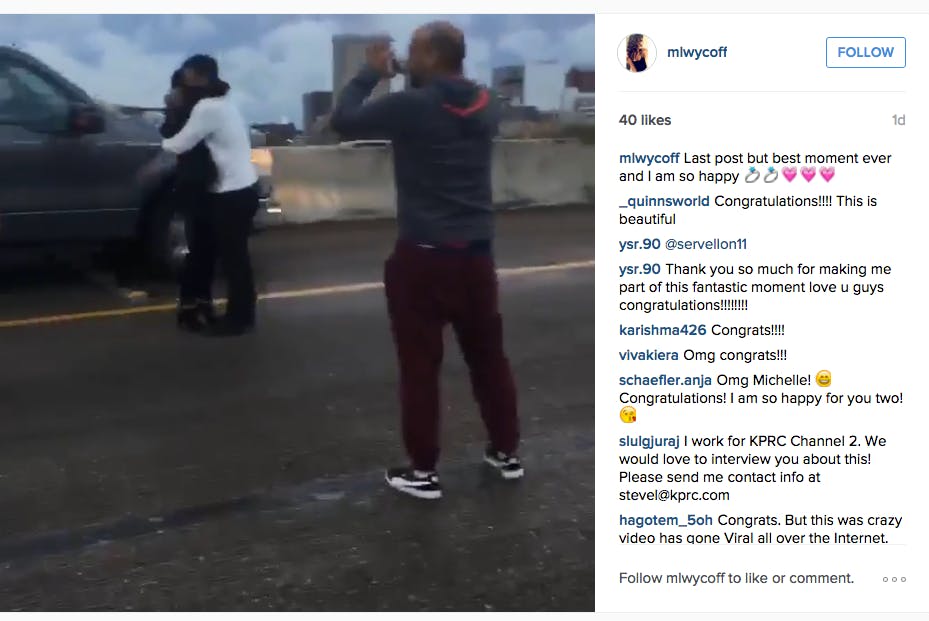 This man, who had his friends stop traffic so that he could propose to his girlfriend right in the middle of Houston’s I-45, believes himself to be the best kind of romantic. The people who sat in standstill traffic on Sunday probably disagree. That his now-fiancée’s “favorite spot” is apparently the middle of a highway is another issue entirely.

Dammed Lies — Lewisville says the sky’s not falling, or, er, in this case, that the dam’s not breaking. In response to the Dallas Morning News story that reported with absolutely frightening detail just how close the dam was to a massive catastrophe, the city issued its own thoughts on the matter. Specifically, it said in a letter that “there is no immediate threat of failure, nor is it likely, and the project continues to function as designed.” As an update to the story notes, “the missive echoes press releases issued by Lewisville in the past. And it sounds very much like something Anita Branch, a project engineer for the Corps’ Fort Worth District, told a gathering in Lewisville two years ago, when she said, ‘Dam failure is not likely, not at all.'” Not that they’re hedging bets, but Lewisville officials did say that even if (if!) the dam’s integrity were threatened (the dam is currently classified by the Army Corp as “high risk,” and its collapse would put 431,000 peoplein harm’s way) “the city does have emergency plans in place for a failure at the dam (along with dozens of other potential disasters)” and “we anticipate ample time to provide sufficient warning and safely evacuate all people living or working downstream of the failure.” So, sleep well!

Coach’s Fault — The San Antonio high school football coach who two players alleged asked them to target and spear a referee has pleaded guilty to assault in the attack. “[Assistant coach Mack] Breed, 29, pleaded guilty to Class A misdemeanor assault at a court hearing in Burnet County on Monday. Judge Linda Bayless issued Breed 18 months of probation, a $1,500 fine and 90 hours of community service. If Breed violates probation, he would have to serve a 12-month jail sentence and pay an additional $2,000 in fines, according to Burnet County attorney Eddie Arredondo,” according to the San Antonio Express-News. “Breed also has to permanently forfeit his teaching certification in Texas and will have to take anger management courses, according to the attorney.” Punishment for the two students, a sophomore and a senior, has already been well underway, with the two receiving 75 days at an alternative school and criminal “charges against [them] are expected to be filed shortly.” And there’s a good chance there’ll be more problems to come, with the referee’s lawyer saying a civil suit is possible. The original incident, caught on camera, occurred after the referee allegedly made derogatory statements toward black Jay players.

Unplanned Parenthood — You’d think officials would be prepared for a surge of immigrants coming across the border, considering the minor crisis suffered just this past year. Nope. There’s been another spike in unaccompanied minors crossing the border, and the Secretary of Health and Human Services wrote in a letter to the U.S. House Appropriations Committee that there’s too little money to finance the housing and care of the kids. In response, “Agency spokesman Mark Weber said the secretary is communicating with members of Congress to take all necessary steps to ‘make sure that we’re prepared’ and that the letter doesn’t demand funds beyond the president’s budget request,” according to the Associated Press. As the story notes, “A total of 10,588 unaccompanied children crossed the U.S.-Mexico border in October and November, compared with 5,129 who crossed during the same two months last year, according to the U.S. Border Patrol. The uptick has already prompted the agency to open two shelters in Texas and one in California. [The HHS Secretary] says in her letter that ‘it is impossible to know whether these trends will continue.'”

Nominee for Worst Mother of the Year Award

“Man Sues Over Foster’s Beer Being Brewed in Texas, Not Australia”

Our Great National Nightmare is Almost Completely Over

Everyone’s Talking About That Ax-Wielding Student

More Deets on That Lawsuit About A Plumbers Truck in Syria