The experts expect this year to be a particularly nasty one for the flu. So even if you dislike the needle as much as the girl in this Dallas Morning News photo, go get the darn shot. 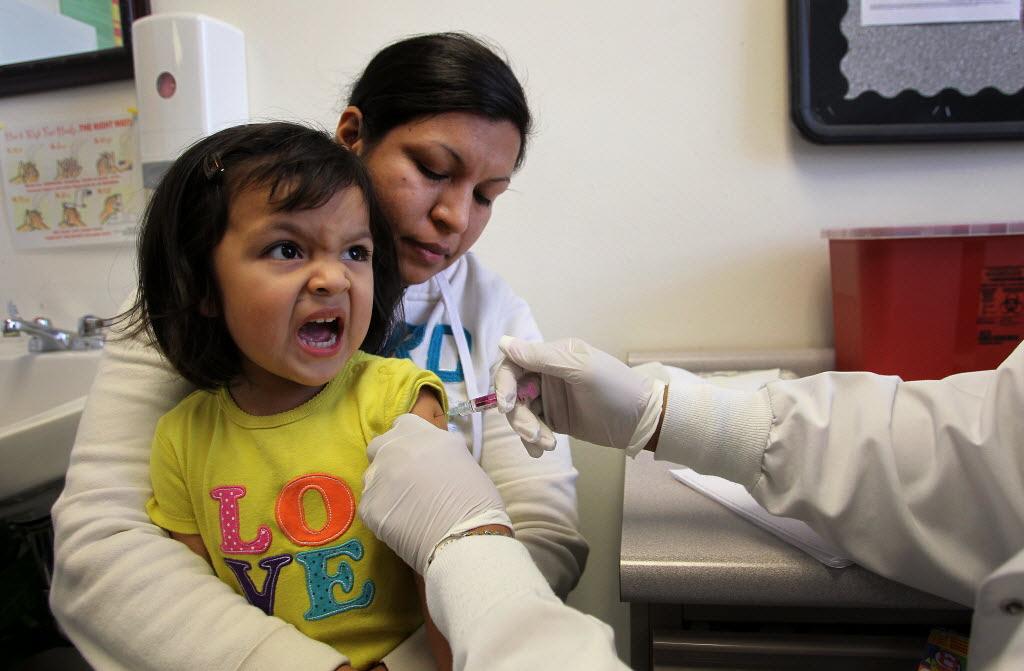 You can find everything on Craigstlist! Including, it seems, haunted swords. An Austin ad has been slowly making the Internet rounds for good reason. The seller, a self-described 76-year-old woman, is trying to get rid of a sword from “the 1700s” because “there is a 90+% chance that it is cursed.” Just $150! While almost assuredly a youngster’s prank, the ad is impressive in its deft tone—absurd yet with touches of believability. Just how wild were the Bush girls during thier stay at 1600 Pennsylvania Ave? Sure, there was the partying and drinking, but there was also, in the words of Jenna Bush Hager, “a little hanky panky:”

Neighborhood Border Watch — Here’s hoping those crossing the border like being on candid camera. “The Texas Department of Public Safety is readying to more than triple the number of surveillance cameras it operates along the Mexico border, installing 4,000 new devices, as part of the next phase of an ongoing law enforcement surge on the border,” reports the Houston Chronicle‘s David Saleh Rauf. The new details come after lawmakers recently approved spending another $86 million to combat the immigrant invasion. As part of the new measures, DPS director Steve McCraw said he is “overseeing a transition in the overarching surge strategy from one of ‘deterrence’ to one he labeled ‘interdiction,’ a stage that will also include the hiring of 600 additional troopers and the expansion of aircraft surveillance.” Sounding the battle horn on the national stage is Governor Rick Perry who told Fox News that “if Washington will not do the job of securing the border for this country, Texas will step in and do the job that the federal government’s failing at.” It’s also worth noting that McCraw said there is “no credible information that a terrorist has crossed or will cross” the border.

Chokehold Nation — The decision by a New York City grand jury not to indict the police officer in the Eric Garner chokehold case has obviously taken over the national conversation. There was also a similar incident in Texas of an officer using a chokehold on a person (also videotaped), albeit with no fatal outcome. “Gary Witherspoon, an off-duty investigator for the Nueces County Attorney’s Office, resigned at about 4:30 p.m. Wednesday,” according to the San Antonio Express-News. Witherspoon, who was off-duty at the time of the incident, had used a chokehold on a woman. Her crime? She had “refused to stop filming an arrest in a Corpus Christi parking lot.” Unlike in some places (Ferguson, NYC), the wheels of justice moved swiftly in this particular case. The incident happened the Wednesday before last. As for the woman, she was, thankfully, released without charges and had uploaded the videos that night. An important question now, one that everyone seems to be asking, is how much a difference police body cameras would make in keeping the peace keepers honest? For just such a look, be sure to check out the recent Daily Post item from Texas Monthly’s own Dan Solomon.

Guilty — With a verdict that likely surprised no one, Eric Williams was found guilty yesterday of capital murder in the gruesome and somewhat surreal revenge murder plot in Kaufman County. “Prosecutors took just three days to present their case against Williams, whom they called a ‘ruthless killing machine’ in closing arguments,” reports the Fort Worth Star-Telegram. “His defense lawyers only made a closing argument and did not call witnesses. ‘The case is so air tight, it sucked the oxygen, it sucked the energy out of any potential defense,’ prosecutor Bill Wirskye said in closing arguments.” Indeed, the jury took less than day to reach its decision. As the Associated Press recalls, “Williams was a former justice of the peace who lost his job and his law license after McLelland and Hasse successfully prosecuted him for stealing three computer monitors from a county government building.” Locked up as the decision might have been, “the case was built on circumstantial evidence against Williams, and the weapon used to kill the McLellands has never been found.” Williams faces sentencing, for which he could receive the death penalty, on Monday.

Ebola-proofing — It’s nice to know officials haven’t just let Ebola concerns fall to the wayside after the summer panic ended. “Building on previous suggestions, including the establishment of two specialized Ebola treatment centers, a task force on Thursday released its full report on how the state could better handle an outbreak of an infectious disease,” reports the Texas Tribune. “The Texas Task Force on Infectious Disease Preparedness and Response, created in October by Gov. Rick Perry after a man was diagnosed with Ebola in Dallas, called for new education efforts to help health care providers be better prepared to identify new diseases.” If you want a little light reading the report is a slim 174 pages. Included in the report is how to take care of pets. Great idea! Especially since the city of Dallas spent about $19,000 quarantining Bentley, the dog of Ebola nurse Nina Pham. “Other recommendations in the task force’s report include implementing a stockpile of personal protective equipment and granting the governor the authority to declare a ‘state of infectious disease emergency.'”

Here’s How Texas Metros Stacks Up in the Inequality Department

The Faces and Tales of Foster Care System Abuse

School Board Member Who Posted a KKK Image Resigned

Gen. Abbott Leading a Fight in the War on Christmas