Ebola might be mostly contained in Texas, but stupid is apparently spreading. The tweet below was came from Ted Cruz’s chief of staff, who later tried to wipe it from history. Some dumb things have been said in politics. This might be up there as one of the best of the worst: 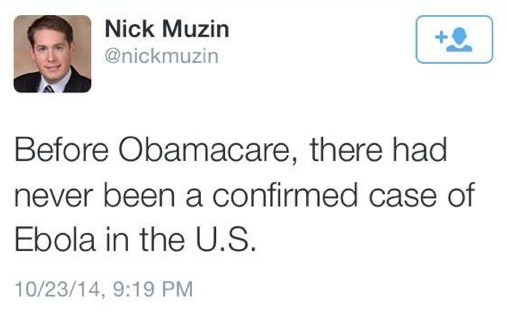 Texas-born filmmaker and recent recipient of the MacArthur “genius grant,” Joshua Oppenheimer has a new documentary coming out. A direct follow-up of sorts to The Act of Killing, his latest, The Look of Silence, looks, well, equally haunting.

If you thought things couldn’t get more crass with the Ebola-themed Halloween outfits, you clearly haven’t lived in America long. Just in time for trick or treating, a University Park home is garnering plenty of state and national attention for its home decor. Police, apparently, “knocked on the door Monday, just to confirm the decorations were indeed just decorations.”

Vote Early, Vote Often — Texans are voting early this year. “In the first three days of early voting, 485,836 voters in the state’s largest 15 counties cast their ballots in this election, compared with 435,077 at the same point in 2010,” reports the Fort Worth Star-Telegram.  “In the first three days of voting, 5.41 percent of voters turned out compared with 5.22 percent in the same timeframe four years ago, state records show.” Frank Phillips, Tarrant County’s elections administrator, said, ““My suspicion is that the governor’s race is driving it. Other counties say they are up too.” While they may be for early voting, Texans are also more inclined this time around to have their ballots hand-delivered. “Well before the deadline, Bexar County had set a record for applications, as more and more voters opt for the convenience of casting ballots from home,” according to the San Antonio Express-News.  Either that or Texans in general are a more decrepit, imprisoned and absent lot than in previous years, since mail-in ballots are available to “military, seniors, the disabled and those who will be out of the county or in jail awaiting trial on Election Day.” Great as this improvement is from 2010, it could still end up being incredibly disappointing. In 2010, Texas came in dead last, as in even behind D.C., in voting.

Ebola Watch: Day 23— Now that New York City has one reported case of Ebola, expect all the East Coast media attention to obsessively shift to their home turf, as if NYC invented Ebola (to be fair, they are pretty entertaining about it). Here in Texas, however, the big-wigs are dealing with the fallout from the three reported cases. During a meeting of the state’s Ebola task force, officials flat out said “most hospitals can’t handle Ebola patients and that they should instead be treated at specialized care centers,” according to the Associated Press. It was a “break with past federal assertions that nearly any American hospital can cope with the virus.” The seventeen-member task force seemed pretty well content with mild finger-pointing and calls for a border crisis-like response. “‘Not to throw stones, but the overall response from Centers for Disease Control and Prevention has been slow,’ said [Baylor University Medical Center’s infectious disease specialist]. He called for the creation of a 24-hour command center to share the latest Ebola information and training. Created barely two weeks ago, the task force has already produced a series of initial recommendations, including calling for contingency plans like mobilizing Texas Guard troops during an Ebola outbreak.” Also: more hot sauce! “At the University of Texas Southwestern Medical Center, where one of the units is being established, the staff has been practicing treating fake patients who have been sprayed at random with [Tabasco] as a stand-in for Ebola virus-laden fluids,” according to ABC News. “Doctors and nurses practice dressing and undressing in their protective gear to avoid contamination, but if they feel the tingle of Tabasco on their skin, they know they’ve been contaminated.”

They Shall Never Display or Advertise — Alamo City officials are taking a good, hard look at their TV screens in the wake of a recent controversy. Following the cancellation of a pro-life rally at the Alamo where organizers planned to set up a Jumbotron showing a procedure of an abortion, city officials are wondering if maybe there shouldn’t be some clearer rules about using the iconic backdrop. “‘We’re going to have to figure out, make a definitive decision about what the future public use of that space will be,’ [said city councilman Diago Bernal]. He said the last-minute decision to not allow a Jumbotron on the premises was due to a city ordinance prohibiting digitally-lit signs in historical districts, although a boxing promoter recently used one as a backdrop. No reason has been given about why that was allowed.” And let’s not forget the time Kanye West wanted to project the video for his song “New Slaves” on the side of the Alamo early last year. Honestly, if the city council (and the Daughters of the Republic of Texas) were serious about not allowing the Alamo to be used for such blatant commercial and political reasons, they’d enact the same draconian policies that got a man eighteen months in jail for urinal desecration.

Safer Borders — Deaths of migrants crossing the border has dropped to a decade-plus low. “The number of people who died trying to cross the U.S.-Mexico border has dropped to the lowest level in 15 years as more immigrants turned themselves in to authorities in Texas and fewer took their chances with the dangerous trek across the Arizona desert,” reports the AP. “The U.S. government recorded 307 deaths in the 2014 fiscal year that ended in September — the lowest number since 1999. In 2013, the number of deaths was 445.” In Texas, officials are saying the drop has a lot to do with the open communication that agents have had with migrants. Strangely, officials are also crediting their propaganda efforts. “Border enforcement officials say the lower numbers are in part due to increased rescue efforts as well as a Spanish-language media campaign discouraging Latin Americans from walking across the border.” If you haven’t heard the government-produced hit, “La Bestia,” you’re really missing out. There are party poopers, of course. “Immigrant rights advocates are skeptical that it is solely the Border Patrol’s efforts contributing to the decrease in deaths,” saying that it may not be a decrease but simply that migrants are or will probably just shift their efforts to another area.

The Texas Frontier Is Dangerous, For Monarch Butterflies