The first weekend of the Austin City Limits festival went off with a bang. Of all the bands that played, however, probably the most enjoyably curious site was the UT brass section and mascot Bevo jamming out to a packed crowd. Also strange: hearing Skrillex, of all people, say “Hook’em Horns.”

Well intentioned as it might be, it’s difficult to ignore the bleak humor in Dallas Weekly‘s decision to run the following, poorly-timed cover last week: 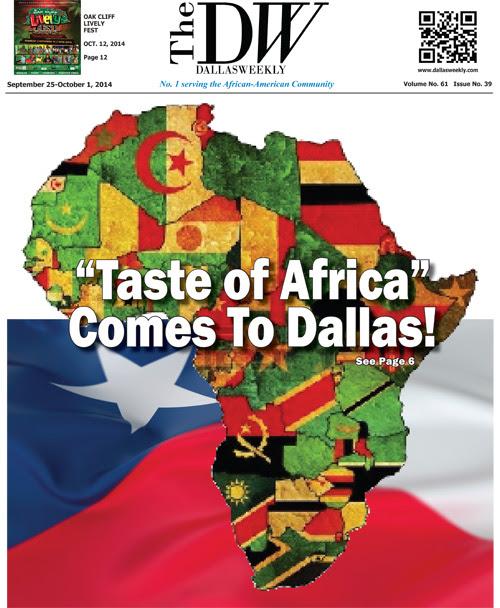 Ebola Watch: Day 6 — It’s almost been a full week since Ebola came to America. So far, there have been no deaths and almost everyone’s healthy, although it’s being reported that patient zero, Thomas Duncan, is now in “critical condition.” As for the nitty-gritty of outbreak prevention, officials have located the homeless man who rode in the same ambulance as Duncan, and he is “now being monitored,” according to the Dallas Morning News. In addition, the Centers for Disease Control offered more details on the ten, high-risk Ebola contacts that they’re monitoring, with “seven of those close contacts [being] local health-care workers and three … family or community contacts.” So far, about 114 people have been tested for Ebola. Now a week out and with a slightly clearer view of what’s happening, the political hacks and human interest stories are both coming out of the woodwork. “Top government health officials said Sunday that they are opposed to placing a ban on travelers from Ebola-infected countries,” reports the Associated Press. But politicians looking for a quick score with the base can make a show of saying the government should “take every available precaution in preventing additional cases from arriving in the United States,” as is the case with our own Ted Cruz. The Senator is apparently not the only high-ranking conservative be pounding the panic button. For those with a bleeding heart, interesting stories about the struggles faced by Liberians—hit hardest by the Ebola crisis—are finally getting press. The Fort Worth Star-Telegram spoke with members of the Liberian-centric church in Euless (“North Texas is home to about 10,000 Liberians”). “I am just so sad,” said Dello Davis, who has lost two cousins to Ebola in Africa. “I pray that everybody in Dallas, everybody in Liberia, continues to have faith.” Amen.

Win-win/Lose-lose —There was plenty of Texas-on-Texas crime this weekend as the Baylor Bears tore apart the Longhorns and the Cowboys shot down the Texans’s hopes. Depending on how you look at it, the Baylor-UT game was either an ugly win or an ugly loss. “Even on a day when the seventh-ranked Bears didn’t live up to their usual standards as an offensive juggernaut, they proved without a doubt that they had more talent, more skill and more mettle than the Longhorns in a 28-7 victory,” notes the Houston Chronicle, along with just about everyone else. “Five months after a UT linebacker referred to them as ‘trash’ and five days after a UT receiver dismissed their improvement by saying, ‘They’re still Baylor,’ the Bears … stayed unbeaten and put themselves in position to jump to as high as No. 3 in the country.” Unlike Baylor, which took over DKR stadium, the Texans takeover of Cowboys stadium did not end as well. The loss came in overtime, after “Dez Bryant’s spectacular catch [that] saved the Dallas Cowboys from a late meltdown.” After the game, Tony Romo took the entire fan base to task: “We played on the road today in that football game,” Romo said. “We need to do a better job as a fan base.” As for A&M? Yeesh. Even the Dallas Morning News couldn’t hold back. “No. 12 Mississippi State shredded A&M, 48-31, smearing the shine on the Aggies’ previously undefeated season and sousing the Aggies (5-1, 2-1 SEC) in an uncomfortable reality.”

Out of Ink — Old-school Texas journalism and community accountability is losing one of its fiercest fighters as Meg Guerra closes the doors on LareDOS. The San Antonio Express-News has a wonderful obituary for the fiesty publication, which had a “regional reputation as a journal unafraid of tackling complex issues, powerful officeholders and cultural sacred cows. For the most part, LareDOS was a one-woman operation, with Guerra serving as editor, writer, and saleswoman. She caused more than an occasional stir with her unrelenting criticism of the small-town good ol’ boy system. There are plenty of critics of Guerra, particularly those who got in her sight, but the 66-year-old grandmother is stepping from the gig, proud as punch of her effort. “It’s not so much that we cleaned up the town or anything, but we sure made an attempt to keep the scoundrels where they belonged,” she said. The story highlights a scene that is quintessential small-town watch dog vs. city officials. “Laredo Mayor Raul Salinas, often lampooned on the paper’s cover, got the city sued in 2008 after an airport video caught him ordering a stack of LareDOS tossed. Other copies at City Hall were also dumped, allegedly at the mayor’s bidding.”

Horse Trading — The actual processes of schooling would sure be a lot easier if it weren’t for mascots and all the trouble they bring. For evidence, look no further than the future UT-RGV, which has been arguing over the issue for months now. The University of Texas-Pan American, along with the entire city of Edinburg—which made ths official declaration last month—wants to keep the “Bronc” mascot. Unfortunately, UT-Brownsville, the other merging university, would like a a”fresh start,” reports the McAllen Monitor. A city resolution is making it through council calling for a brand new mascot when the two schools merge. Perhaps this is not very surprising when your mascot is the ocelot, but the resolution highlights how sensitive everyone can be when it comes to debating pagan-like animal worship. The resolution “calls for the adoption of a mascot different from those at either UTB or UTPA, but makes a stipulation calling for the new university to allow current students and alumni to identify with their current respective mascots as well.” You know, should anyone feel slighted, which apparently they do. Apart from the UTPA student government making some stern declarations, “[UTPA alumnus and Edinburg City Councilman J.R.] Betancourt who authored the resolution, insists that not preserving UTPA’s mascot would be like erasing the college experience of thousands of UTPA alumni.”

A Lil Hit: Small Amounts Of Weed May Not Be So Bad In Dallas County