Here’s a behind-the-scenes glimpse of the glamorous life of a political journalist from the Texas Prince of Weird Political Twitter, Christopher Hook, who was at Ted Cruz’s Fort Worth event on Thursday. 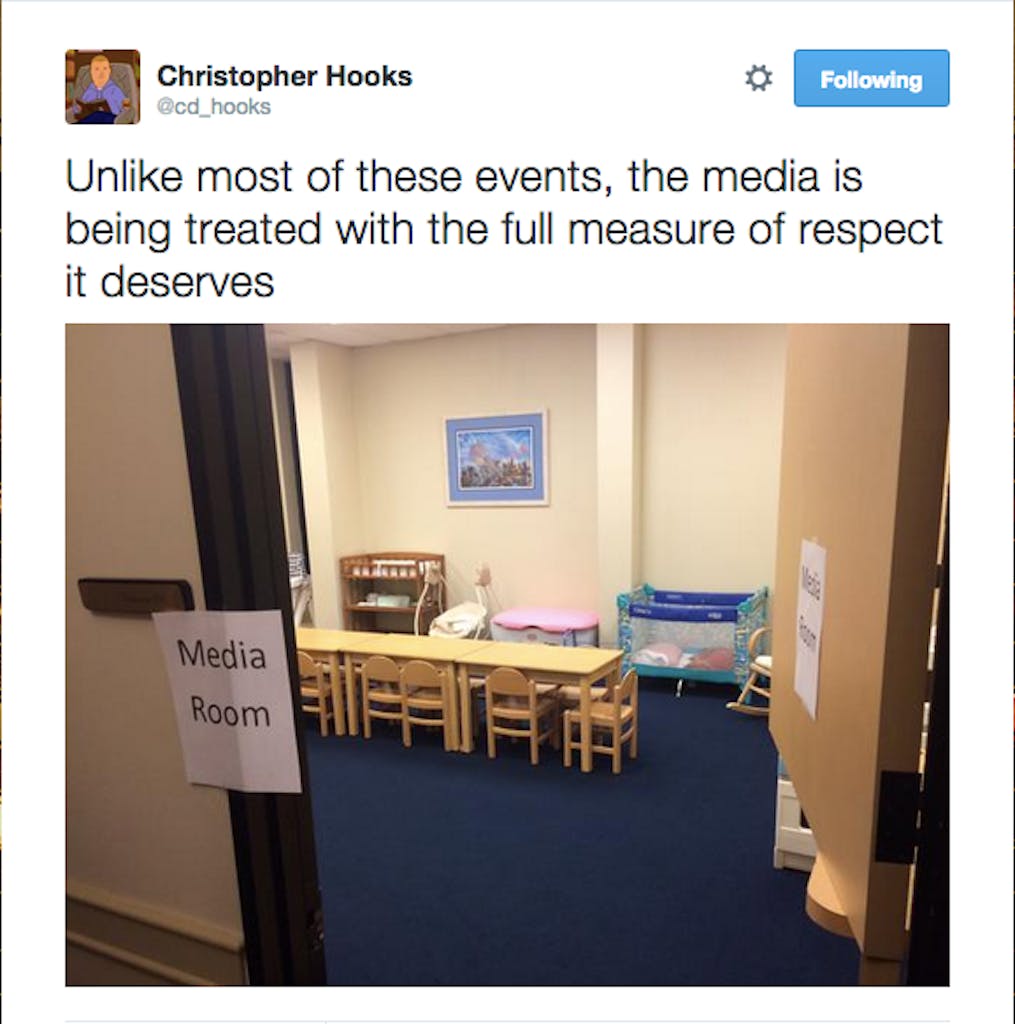 Black (And Blue) Friday — It was another rough week for Texans, and it will come to a sad end Friday when Harris County Sheriff’s Deputy Darren Goforth is laid to rest. Thousands are expected to attend, reports the Houston Chronicle, including Governor Greg Abbott, Lieutenant Governor Dan Patrick, Representative Sheila Jackson Lee, and Senator Ted Cruz. Pastor Gary Moore “said he expects Goforth’s funeral to be perhaps the largest ever for the church. There is to be a 21-gun salute and a march of the riderless horse in addition to the helicopters from the sheriff’s office and Houston Police.” According to Houston’s ABC 13, the governor has “requested that citizens turn their headlights on at 11 a.m. Friday for one minute, and requested law enforcement officials to turn their police lights during that time as well” to show of support. KHOU has a real tear-jerker commemorating fallen officers, in which it spoke to the twelve-year-old son of Richard Martin, who was killed in the line of duty in May.

Bad Teacher — There’s been a noted string of inappropriate teacher-student relationships, and a new piece from the Austin American-Statesman shines a bit more light on the troubling issue. “The number of Texas teachers accused of having inappropriate relationships with students has increased for the seventh year in a row, a trend experts say is fueled by off-campus contact through social media and text messaging,” according to the piece. In the fiscal year that ended September 1, there were 188 cases opened. “Over the last seven years, the number of improper student-teacher relationships has increased 53 percent. Between 2009 and 2014, the number of teachers in Texas has grown by less than half a percent, according to state data.” Apparently, “inappropriate” is a wide definition. The piece notes that not all the relationships are sexual in nature, not that it makes the issue any less troubling. And, apparently, it’s a bunch of dudes causing the problem. “Investigators with the agency say the bulk of cases involve social media use by male teachers who are often bold enough to have explicit conversations with students online.” Lest anyone think this is a passing trend, “experts who track such cases expect the number of improper relationship cases in Texas to continue to increase.”

All Children Left Behind — As if the tasteless teachers weren’t enough, here’s another disappointing trend for Texas schools—poor test scores. This year’s SAT scores “plummeted to their lowest levels in more than two decades, mirroring downward trends across the nation on the college entrance exam,” writes the Dallas Morning News. “Results released Thursday by the College Board, which administers the exam, showed that the average score of the Class of 2015 on the math section of the SAT dropped nine points from last year to 486. That was the lowest figure going back more than two decades. … In writing, students registered an average 454, down seven points from a year ago.” For point of reference, a perfect score is 800, so the average Texas student is just about half-terrible at basic educational skills. As the story notes, such a significant year-to-year drop in scores has rarely been documented. If it’s any consolation, there has been a dip in scores across the country, but those low scores are still much higher than Texas’s. So far, reasoning behind the low scores doesn’t seem like one with any immediate solutions. “State education officials have attributed the declining SAT scores in Texas to an increase in the number of minority students taking the exam. Minorities generally perform worse than white students on standardized achievement tests like the SAT and ACT, the nation’s two leading college entrance exams.” Clearly, though, it also has something to do with the system in place. “A total of 193,768 students in the Class of 2015 in Texas took the SAT, of whom 92.5 percent were from public schools. Public school students scored lower in all three subjects than students from private and religious schools.”

The Never-Ending Campaign — As is appropriate, presidential candidate Ted Cruz made a homecoming stop, albeit a short one. Cruz hasn’t been in Texas much, perhaps because he’s banking on the home team to vote for him. Or maybe  not! “We’re taking nothing for granted,” Cruz said, promising to “compete hard,” according to the Texas Tribune. If he doesn’t actually mean that, no one would fault him for not wasting his time with a sure-thing. After all, how long is Rick Perry going to last? That’s a serious question, especially considering that just about everyone reported on the loss of Perry’s New Hampshire staff, which hadn’t been paid since June (some of the staff joined the which-one-is-that? candidate). Washington, D.C.’s trade journal, Politico, is pretty much banking on a defeat, publishing the less-than-subtle  “Rick Perry’s Campaign Death Spiral.” Speaking of Texas governors, Abbott is going to do a little bit of campaigning himself, though this will be south of the border. On Sunday, “Abbott and a small delegation of Texas officials are scheduled to meet with Mexican President Enrique Peña Nieto, Secretary of Foreign Affairs Claudia Ruiz Massieu Salinas and other Mexican officials to discuss the ‘deep cultural and economic ties’ between Texas and Mexico,” reports the Texas Tribune.

Frisco High School Does Unthinkable, Says “No” to Mums

Not So Lonesome: McMurtry Getting Big National Prize

Like Tequila? Next Week, Juarez is the Place for You