Anyone who knows me knows I’m happiest when I’m in the water. Or better yet, on the water, preferably borne by an inflatable inner tube. I’ll float anything from a glassy lake to a Jacuzzi tub (really, if it’s big enough). But nothing in the world compares to being whisked down the rock-riven channels of a beautiful Texas river. And nowhere do memories of tubing loom larger than Concan, where my extended family would converge at Neal’s Lodges when I was a kid. Not particularly remote, and a virgin wilderness by no means, the oddly named hamlet has nonetheless been my favorite little pocket of the state ever since. To me, this southernmost portion of the Edwards Plateau embodies what poet David Whyte calls a “conversation of elements that makes a place incarnate, fully itself.” Bisected by the meandering, crystal-clear Frio River, it’s a juxtaposition of green-carpeted hills, scrubby trees and yellow-flowered prickly pear, and everywhere rocks and limestone ledges and stony canyon walls. “Nowadays it seems there are so many more-exciting places to go,” my aunt Merle says, “but that’s just where we went. We went to the coast and to Concan.” That’s what we did, that’s where we went, and therefore, in the way that a certain place at a certain time will take powerful hold in the psyche, it became a place that requires an occasional return visit in order for me to feel fully myself.

So  here we are, fortysomething years later, three friends and a baby, on our way to Neal’s, family-run since 1926 and still as delightfully no-frills as it was when I was a kid. Our lumbering white Tahoe reminds me of my family’s creaky caravan of Suburbans and fifth-wheel-pulling pickup trucks, and just like decades earlier, the winding two-lane roads seem to be in cahoots with the undulating landscape to heighten anticipation. I see the sign for Neal’s (“T-shirts, riverwear, inflatables, giftables”), and I’m awash in memories. Of seesaws and camp fires and ice-cream bars from the lodge store. Of long pony rides on tree-shaded trails and over the Frio, where my horse—always my horse—lingered for what seemed an eternity, determined to drink the river dry and strand us from the rest of the train (to paraphrase O. Henry’s paraphrase, himself no stranger to the Frio country, “No child is a hero to her long-suffering saddle horse”). Of playing house with my cousin and brother (our “dog”) among the pocked limestone shelves, our aunts and uncles and grandparents supervising from a ring of rickety lawn chairs set up in the shallow water. And, best of all, the tubing, the terrifying euphoria of being thrashed by an indifferent but, for the most part, docile river. Your reward for surviving: a return to camp for hamburger patties and hot dogs sizzling on ancient barbecue pits.

The next day my tubing buddy and I hit the Frio, armed with sunscreen and a stainless-steel bottle of rosé. It’s late April, pre–peak season; we have parts of the 100-cfs river entirely to ourselves, which is the only reason this nostalgia-soaked ode is not instead an in-my-day diatribe against the flotillas of debauchery that commandeer so many of our state’s attractive waterways. The famous rope swing my dad remembers is long gone (he and his teenage pals, dissatisfied with the height of the wooden platform, would drag a six-foot ladder onto it and launch from that. “Just imagine the momentum!” he says). It appears to have been replaced by a long nylon slide that is, thankfully, not yet up and running, leaving the kids on hand to content themselves with jumping off the famous Big Rock and fishing from the banks. Our tubes are disconcertingly colorful, but all else is reassuringly familiar (save for the good-sized snake I come face-to-face with in the reeds): the bald cypresses, their many-folded skirts grazing the water’s surface; dragonflies in opalescent purple and blue and green alighting on our knees; the ever-shifting blue-green of the river as we float through cool shade and warm sun; the drop-offs that upend your tube and the gravel bars that beach it, which is tolerable, as it only prolongs the trip. Four hours later, we’re out of the water, slightly chilled and afflicted with that ravenous fatigue so out of proportion with the day’s exertions, and on our way back to our hilltop cabin and our own ancient barbecue pit, its cruddy grate a palimpsest of butter-slathered corn and foil-wrapped potatoes and marshmallow remnants and, now, a few grass-fed New York strips.

It’s easy to lament the way things used to be, or at least what used to be as it accords with our faulty memories. Change is the only constant for our beloved natural places, vulnerable as they are to duress from unpredictable weather and careless visitors, and the Frio has seen its share of both. But on a good day, it’s kind of nice to take note of what hasn’t changed. Happy dogs and happy kids, a big rock to jump off of into a deep blue swimming hole and an hours-long tubing trip in which you have no choice but to relax and surrender control. The river is a little different every time you float it—exhilarating, boring, awe-inspiring, hilarious. It will lull you to sleep one minute and steal your swimsuit the next, and it cares nothing for your agenda. My dad remembers a particularly fine tubing day with his brother-in-law, my uncle Junie, who rarely took a break from running his hardware store in Canyon Lake. Junie’s arms draped over his giant black inner tube, he looked at my dad and said, “This may just be the greatest day of my life.”

On the way out of town we take the three-month-old down to dip his toes in the river. His blue eyes wide, he seems both startled and mesmerized, and so the initiation begins. When he gets older, we’ll take him tubing here and impart some of what we’ve learned: Mind your butt and hang onto your hat. When it gets too rough, get out and portage over the worst of it. But tread lightly and take your time. As we were helpfully reminded by a fellow traveler, “Some of them rocks are slicker than snot.” 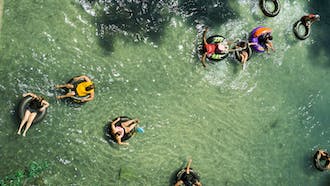 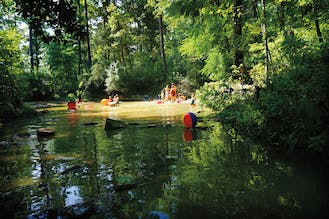 The Texanist: If You Can’t Take the Heat… 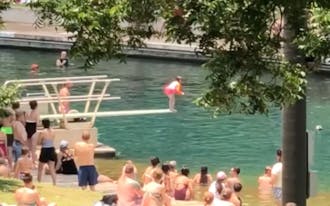 The Best Thing in Texas: Watch Barton Springs Pool Cheer on a Little Girl as She Jumps In