Last Sunday night, Alan Graham left the comfy confines of his Westlake Hills home and took to the streets to hang with the people who inhabit them. It is a routine Graham has had since 2003, when he began hosting Street Retreats as part of Mobile Loaves & Fishes, the Austin nonprofit he co-founded in 1998, whose mission is to restore dignity to homeless people through food, clothing, and camaraderie. Graham decided early on that he wanted to try to get to know every homeless person on a first-name basis in Austin, a population of around 2,200 people, as of early 2016 according to the Austin American-Statesman.

Graham was fed up with the system’s typical response to big social issues like homelessness: put a bunch of intellectuals around a conference room table and have them come up with ideas. His solution was to attempt to build intimate relationships with these men and women and understand their needs and desires. “I wanted the Street Retreat to be that opportunity where I could go and literally sleep next to them and hear their life story and let them hear my story,” Graham says.

Street Retreats, of which Graham has hosted roughly fifty, invites the greater population of Austin to experience a weekend living among the homeless. (This writer attended a Street Retreat in 2010 and wrote about it for the Texas Observer.) But on this particular Sunday—an abbreviated one-night version of a Street Retreat to provide a prospective Mobile Loaves & Fishes board member with the experience—Graham saw something troubling that he had never seen before.

While spending time at the Austin Resource Center for the Homeless, or ARCH, he encountered a number of people strung out on a dangerous synthetic drug called K2 that dealers have been pushing on vulnerable homeless people. The effects of smoking it can cause users to go into a zombie-like state, which can be followed by convulsive seizures and even death. “I think four people died this past week down there as a result of that drug,” Graham says. “I’m told there’s now about twenty or twenty-five EMS calls there a day, which is unbelievable. I had one woman drop right in front of me, so that was pretty wicked to watch.”

It is all in a day’s work for Graham, who has recorded his life’s work in the new book Welcome Homeless: One Man’s Journey of Discovering the Meaning of Home, published by Thomas Nelson, a Christian-themed imprint of Harper Collins. Written in partnership with Lauren Hall, the book unfolds with the story of how Graham got into this line of work. The many meanings of “home” are explored in the remaining pages, featuring profiles of ten homeless people, or couples, with whom Graham forged friendships.

Chief among them is the late Houston Flake, a custodian at St. John Neumann Catholic Church, where Graham and his friends conceived the idea for Mobile Loaves & Fishes. Graham and crew were clueless about what they were doing, so they approached Flake, an illiterate former drug addict and convicted felon who had been chronically homeless before. Flake was enthusiastic about helping and became their gateway to the streets. “What was powerful about my relationship with Houston is that he was so generous,” Graham says. “His dying wish was to take four hundred popsicles into the projects in Austin and give them out to the little kids. But he never got well enough to do that. He’s the one guy on the planet that, to me, represented who Jesus Christ is.”

On Thursday, April 20, Graham will host an RSVP-only book signing at the Highball, in Austin. It will be an opportunity for those interested in helping to mitigate the issue of homelessness to learn from a pioneer in the field. Graham is sure to lay out Mobile Loaves & Fishes’ three-pronged approach, the foundation of which is the Truck Ministry. Feeding the homeless isn’t exactly a revelatory proposition, but the approach that the nonprofit’s food trucks take is novel. Traditionally, homeless people are herded to a soup kitchen and line up single file to have their trays filled with dollops of indeterminate muck from a server behind a counter. The Mobile Loaves & Fishes setup is nontraditional in that instead of the homeless coming to the food trucks, the food trucks come directly to the homeless. Better yet, they can choose from a variety of offerings. And key to it all is that the servers cross the thresholds of the truck doors and come out to the street to serve their constituents. Thus, relationships are born and a bit of humanity is renewed.

“Every human being on the face of the planet has two great fundamental desires,” Graham says. “They desire to be loved—deeply. And they desire to be known—deeply. And this is fundamentally a population of people who are not loved. And nobody wants to know them. They just want to push them to the farthest fringes of our society. And we as a society are not understanding the implications of that outcasting that we’re doing—what that does to the human person.”

Another component of the Mobile Loaves & Fishes operation is Community Works, a gainful-employment program. The homeless are often characterized as lazy beggars, and, sure, there’s a lot of that. But there are also a good number of people who want to work, according to Graham, though the opportunities are limited. Graham points out that it used to be the case in the United States that one could make a good buck selling water, roses, newspapers, and the like on street corners. But that form of entrepreneurialism has been restricted. “It’s impractical for somebody that lives in poverty to be able to do that anymore,” Graham says, “yet panhandling is a First Amendment free speech right. I find that crazy.” The purpose of Community Works is to decrease the number of people asking for handouts and increase the number of ways to make an honest living, through jobs in gardening, blacksmithing, and woodworking. 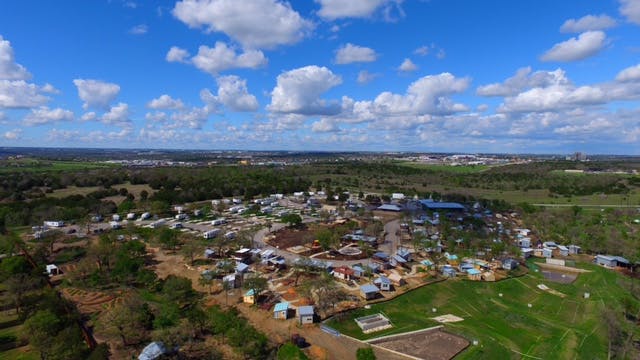 The third prong of Mobile Loaves & Fishes is the Community First Village, a 27-acre community in East Austin that provides affordable, permanent housing for the homeless. In exchange for modest rent, paid through wages or disability checks, residents have access to features like a medical facility for health screenings, an outdoor movie theater programmed in partnership with Alamo Drafthouse, and, perhaps most importantly, WiFi. Graham believes that the single greatest cause of homelessness is “a profound, catastrophic loss of family,” whether by forces like death or divorce, or institutional failures in the criminal justice and foster care systems. When the family unit is dissolved, the remaining members can become adrift and vulnerable, with no one there to pick them back up if and when they fall down.

The Community First Village opened little more than a year and a half ago. There are 240 housing units providing shelter for as many as 275 residents—a mix of micro-homes, RVs, and canvas-sided cottages. Fifty percent of the village has been occupied consistently since its inception. It is expected that by the end of the year the community will be close to full occupancy. After that, Graham plans to develop the adjacent 24 acres into an additional 350 units.

Over the years people have reached out to Graham about writing a book. He had always considered himself “too ADD” to sit down and do it alone. Moreover, he could never seem to find the right person to capture his voice. Then along came Lauren Hall, a ghostwriter newly employed by the Fedd Agency, an Austin literary agency with a niche in faith-based works. Hall was a 23-year-old transplant from New York, where she worked at the Village Voice and Dave Eggers’s literary nonprofit 826NYC. She was living in a 120-square-foot tiny house in East Austin when a friend tipped her off to the Community First Village. Hall visited, feeling as though she had arrived in Utopia. She later met Graham and participated in a Street Retreat with him. Moved by her experiences, she knew she was the one to tell his story.

“Given my background and my preferences,” Hall says, “I naturally gravitated toward books that were story-driven, gritty, honest, and stylistic. Alan, as a person and an author, had all of these things, and so at the end of the day, this twenty-something female and this sixty-something male just had more in common than expected. I understood his heart and who he was as a protagonist in his story—this unexpected hero.”
The Highball, April 20, 4 p.m., eventbrite.com

AUSTIN / HOUSTON
Raise a Glass
Central Texas one-man-band Scott Biram, like any true bluesman, is fond of name-checking whiskey in his songs, but on his new album, The Bad Testament, he has a song titled “Red Wine.” That downgrade shouldn’t dissuade his diehard fans from two upcoming CD release shows, in Austin and Houston, because he can still get positively drunk on wine and act like the hellion that he is.
Antone’s, April 14, 9 p.m.; Fitzgerald’s, April 15, 8 p.m.; scottbiram.com

DRIFTWOOD
Graves Digger
This is the thirtieth year of the Old Settler’s Music Festival, which is good reason to finally attend the most genuine, feel good roots music festival in Central Texas. Not that you should need more convincing, but consider this: one of the headliners this year is Shakey Graves, the rising star of Americana, who got his start there.
Salt Lick Pavilion, April 20–23, oldsettlersmusicfest.org

EL PASO
Once You Go Black
Austin funk-soul brother Black Joe Lewis has a new song, “PTP,” from his album Backlash, which addresses the power of female sexuality (good luck untangling that acronym). With horns and guitars from his backing band the Honeybears blaring above Lewis’s wail, the song has the potential to make people feel hot and bothered one last time, in El Paso, before the tour concludes.
Lowbrow Palace, April 15, 9 p.m., blackjoelewis.com

FORT WORTH
Modern Yet Old
The Modern Art Museum of Fort Worth’s sleek new building gives the impression of a cultural institution birthed for the twenty-first century, but the museum as a collection has been around since 1892, in multiple iterations, making it the oldest in Texas. Celebrate those 125 years with a retrospective exhibit mining the Modern archives.
Fort Worth Library-Central Branch, April 17 to July 6, themodern.org

MANSFIELD
The King of Kountry
Considering George Strait’s 1992 soundtrack for the movie Pure Country, in which he starred, is his best-selling album, shouldn’t there be merit in the movie itself, despite its tanking at the box office? Reassess said worth at the Pure Country 25th Anniversary Celebration, hosted by the Western Kountry Klub, a honky-tonk where scenes from the movie were filmed.
Western Kountry Klub, April 14, 6 p.m., downtownmansfield.org