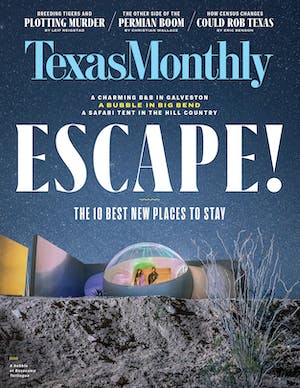 From the June 2019 Issue Subscribe
These are some of the places we’re looking forward to checking out over the next year.

In our June cover story, we look at the best new and renovated hotels that have opened since our last Where to Stay Now published in 2016. Many hotels are scheduled to open across the state over the next year. Here are five that we’re excited to visit in the coming months.

La Corsha Hospitality Group just opened the doors on its latest a project, a 75-room boutique hotel with Danish-inspired décor, a courtyard pool, promising food and drink offerings headed by an all-star team, and options for all price ranges, including “cost-conscious cabins.”

Named after “Mother of Houston” Charlotte Baldwin Allen, this posh new 354-room downtown hotel celebrates the female wildcatter spirit; the former DoubleTree is being transformed by interior designers Lauren Rottet and Kate Rohrer, among other women leading the charge here. The ground floor will feature local boutiques and access to the Acre green space at the Allen Center.

Fort Worth
The Sinclair
Summer 2019

The newly restored 1930s building near Sundance Square will offer 164 modern rooms decked out in Italian furniture and high-tech touches, such as digital showers. The seventeenth-floor rooftop lounge at this Marriott Autograph Collection Hotel should be a prime cocktail spot.

The Dallas Arts District later this year will be home to a modern luxury hotel from real estate developer the Hall Group that will showcase contemporary work from local artists. Among the 183 guestrooms will be ten suites inspired by the Arts District, with skyline views of downtown. hallgroup.com/business/hall-arts-hotel

The long-awaited restoration of this 106-year-old hotel (formerly the Camino Real), known for its stained-glass dome ceiling, is back on track and slated to reopen as a 350-room Marriott Autograph Collection hotel next spring.