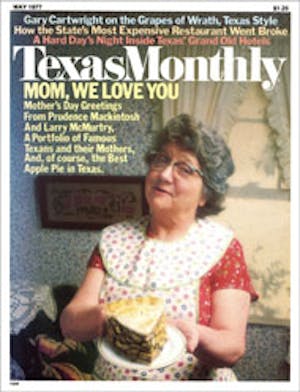 Isn’t it nice to come home to mother? She’s the one person in the world who knows how to treat you right. Mother doesn’t let you get too big for your britches. She’s not particularly impressed, no matter how famous you get. She knew, after all, you’d be a star someday, but she’s not letting success go to your head. And she can still tell you what to do. “Call once in a while. Visit more often. Eat your dinner; I made it just for you. It’s your favorite meal.”

Ah, that favorite meal. It’s the meal that mother used to make that some­how—no matter what was in it—satisfied every last remnant of hunger. It did something else, too: that meal represented everything good about being a kid. Nobody else, anywhere in the world, can make that meal quite as well as mom. Substitutes don’t work: if mom’s beans came out of a can, you can’t pass off fresh ones for the real thing; if the spaghetti sauce was homemade from an ancient family recipe, even a dash of Franco-American or Ragu will not pass your lips undetected. The favorite meal wasn’t just this-and-that thrown together. It wasn’t just something you ate because it was good for you. It’s the meal you’d want if you were making out your last request.

The five Texans shown on the following pages with their mothers and their favorite meals are a ways from their childhoods. They haven’t had ordinary experiences. They’ve all had their names in lights and in print, and their faces before the public. But they all come home to mother now and then and they still remember that special meal she used to make just for them. No matter how rich or famous, these Texans all remember mama. 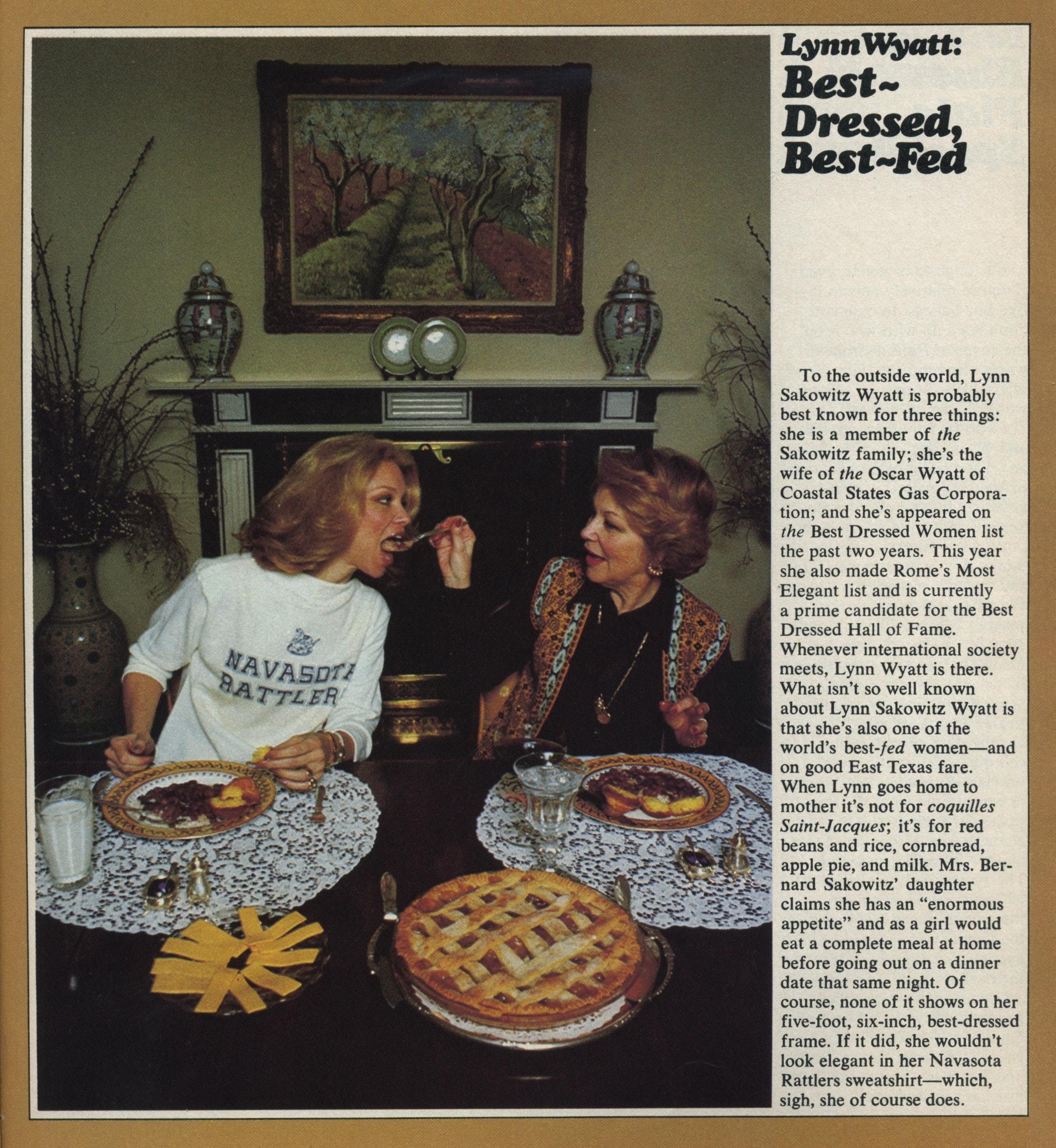 To the outside world, Lynn Sakowitz Wyatt is probably best known for three things: she is a member of the Sakowitz family; she’s the wife of the Oscar Wyatt of Coastal States Gas Corpora­tion; and she’s appeared on the Best Dressed Women list the past two years. This year she also made Rome’s Most Elegant list and is currently a prime candidate for the Best Dressed Hall of Fame. Whenever international society meets, Lynn Wyatt is there. What isn’t so well known about Lynn Sakowitz Wyatt is that she’s also one of the world’s best-fed women—and on good East Texas fare.

When Lynn goes home to mother it’s not for coquilles Saint-Jacques; it’s for red beans and rice, cornbread, apple pie, and milk. Mrs. Ber­nard Sakowitz’ daughter claims she has an “enormous appetite” and as a girl would eat a complete meal at home before going out on a dinner date that same night. Of course, none of it shows on her five-foot, six-inch, best-dressed frame. If it did, she wouldn’t look elegant in her Navasota Rattlers sweatshirt—which, sigh, she of course does. 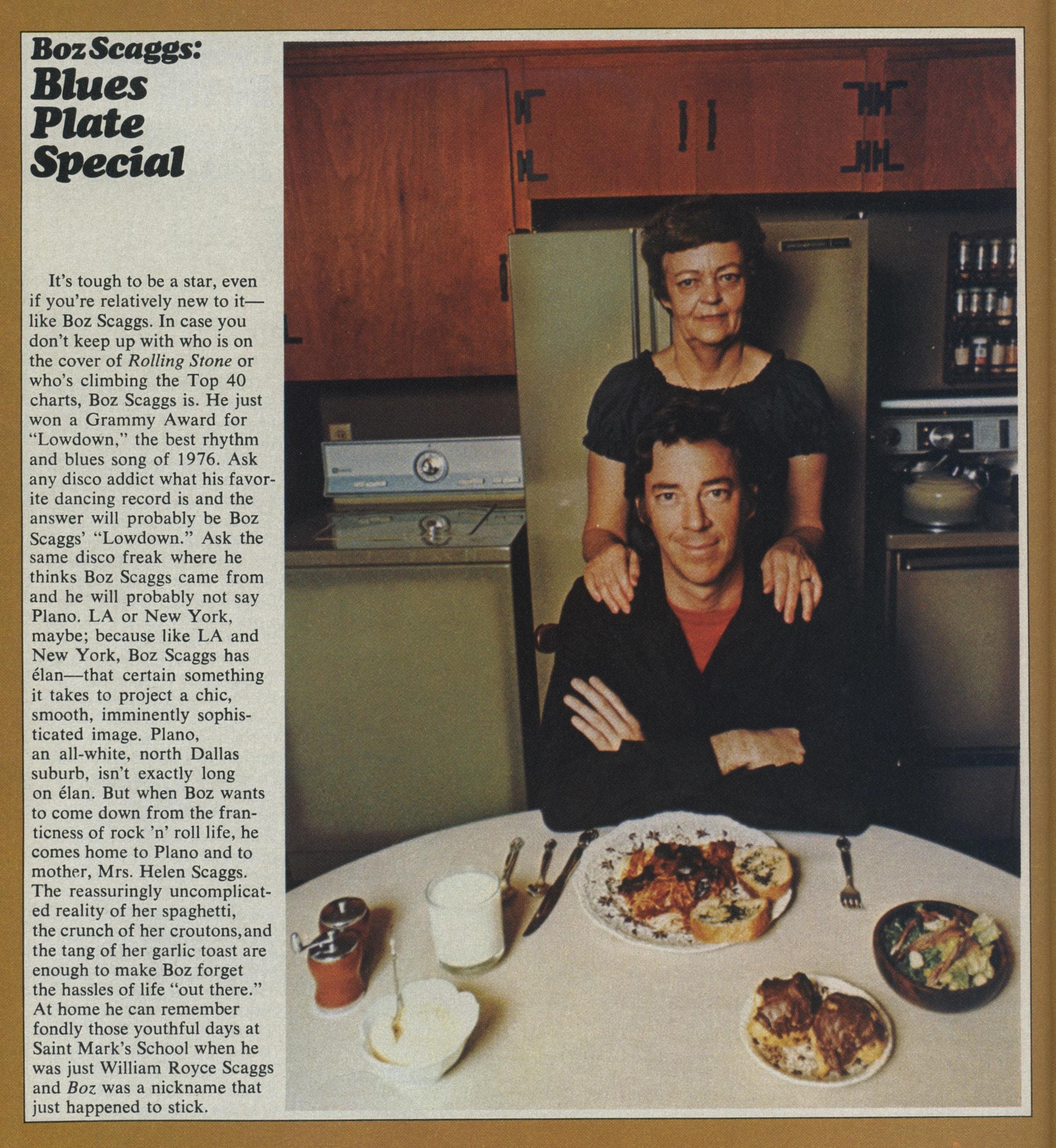 It’s tough to be a star, even if you’re relatively new to it—like Boz Scaggs. In case you don’t keep up with who is on the cover of Rolling Stone or who’s climbing the Top 40 charts, Boz Scaggs is. He just won a Grammy Award for “Lowdown,” the best rhythm and blues song of 1976. Ask any disco addict what his favor­ite dancing record is and the answer will probably be Boz Scaggs’ “Lowdown.” Ask the same disco freak where he thinks Boz Scaggs came from and he will probably not say Plano. LA or New York, maybe; because like LA and New York, Boz Scaggs has élan—that certain something it takes to project a chic, smooth, imminently sophis­ticated image. Plano, an all-white, north Dallas suburb, isn’t exactly long on élan. But when Boz wants to come down from the fran­ticness of rock ’n’ roll life, he comes home to Plano and to mother, Mrs. Helen Scaggs. The reassuringly uncomplicat­ed reality of her spaghetti, the crunch of her croutons, and the tang of her garlic toast are enough to make Boz forget the hassles of life “out there.” At home he can remember fondly those youthful days at Saint Mark’s School when he was just William Royce Scaggs and Boz was a nickname that just happened to stick. 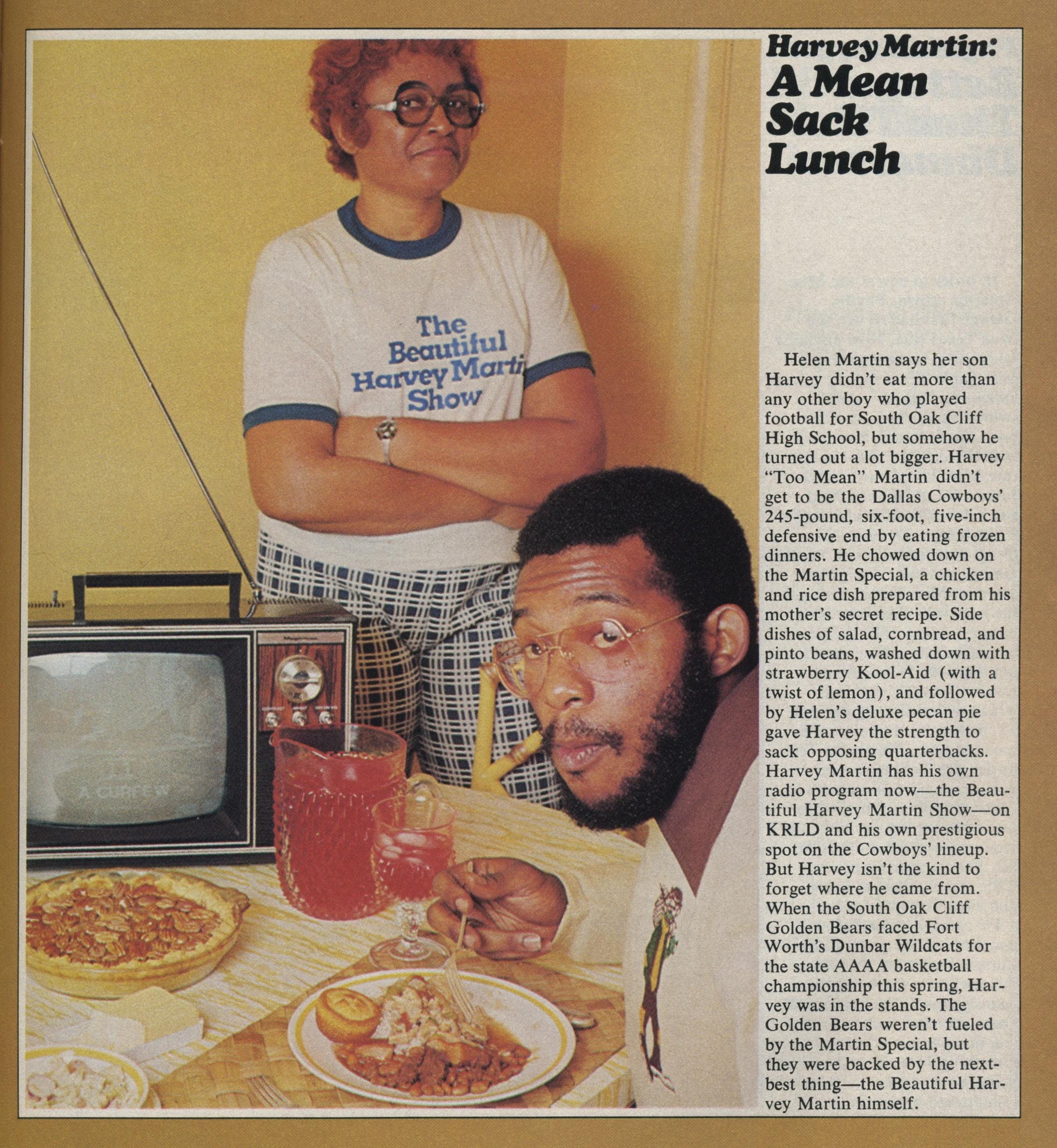 Helen Martin says her son Harvey didn’t eat more than any other boy who played football for South Oak Cliff High School, but somehow he turned out a lot bigger. Harvey “Too Mean” Martin didn’t get to be the Dallas Cowboys’ 245-pound, six-foot, five-inch defensive end by eating frozen dinners. He chowed down on the Martin Special, a chicken and rice dish prepared from his mothers secret recipe. Side dishes of salad, cornbread, and pinto beans, washed down with strawberry Kool-Aid (with a twist of lemon), and followed by Helen’s deluxe pecan pie gave Harvey the strength to sack opposing quarterbacks. Harvey Martin has his own radio program now—the Beau­tiful Harvey Martin Show—on KRLD and his own prestigious spot on the Cowboys’ lineup, But Harvey isn’t the kind to forget where he came from. When the South Oak Cliff Golden Bears faced Fort Worth’s Dunbar Wildcats for the state AAAA basketball championship this spring, Har­vey was in the stands. The Golden Bears weren’t fueled by the Martin Special, but they were backed by the next-best thing—the Beautiful Har­vey Martin himself. 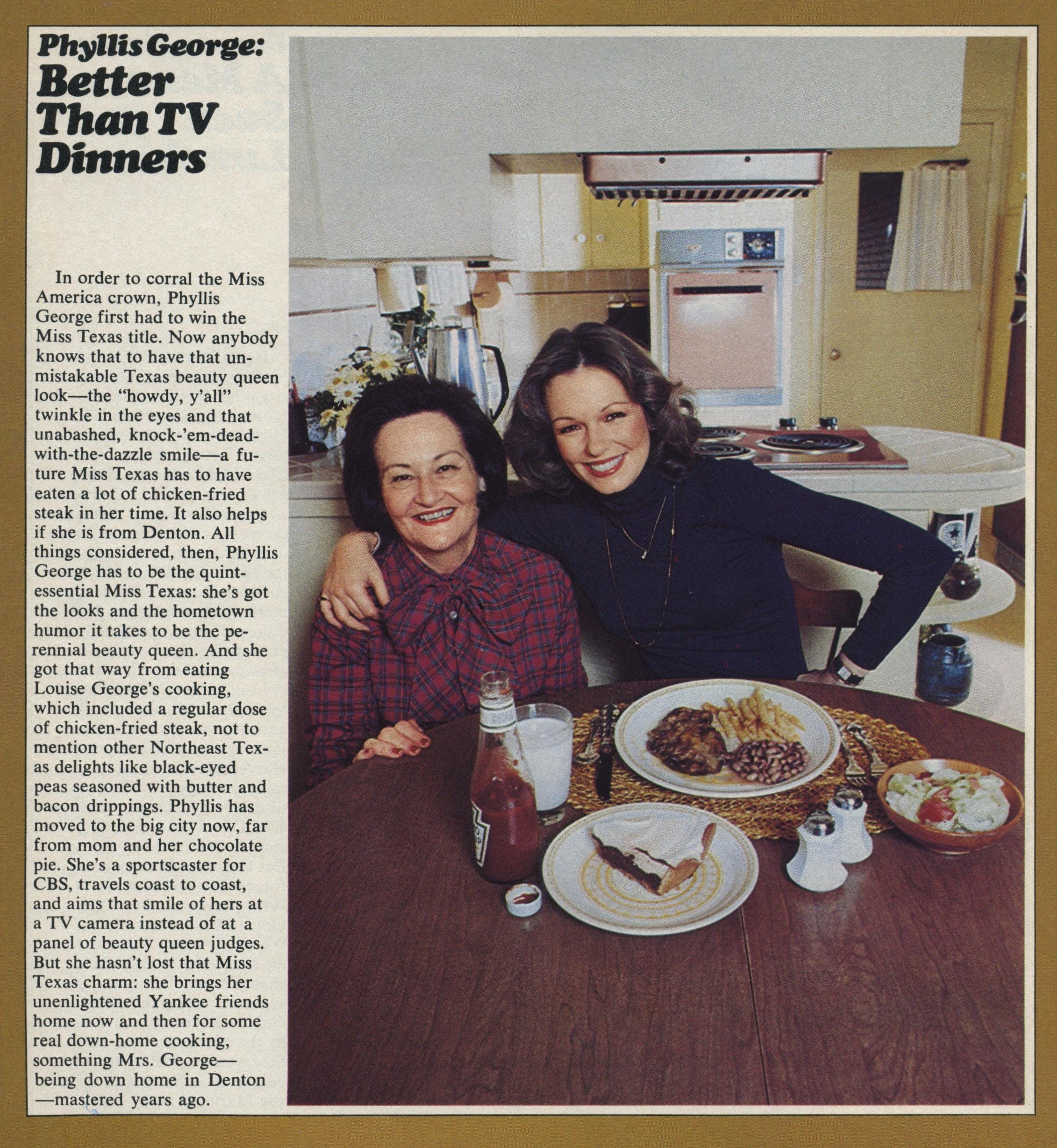 In order to corral the Miss America crown, Phyllis George first had to win the Miss Texas title. Now anybody knows that to have that un­mistakable Texas beauty queen look—the “howdy, y’all” twinkle in the eyes and that unabashed, knock-’em-dead-with-the-dazzle smile—a fu­ture Miss Texas has to have eaten a lot of chicken-fried steak in her time. It also helps if she is from Denton. All things considered, then, Phyllis George has to be the quint­essential Miss Texas: she’s got the looks and the hometown humor it takes to be the pe­rennial beauty queen. And she got that way from eating Louise George’s cooking, which included a regular dose of chicken-fried steak, not to mention other Northeast Tex­as delights like black-eyed peas seasoned with butter and bacon drippings. Phyllis has moved to the big city now, far from mom and her chocolate pie. She’s a sportscaster for CBS, travels coast to coast, and aims that smile of hers at a TV camera instead of at a panel of beauty queen judges. But she hasn’t lost that Miss Texas charm: she brings her unenlightened Yankee friends home now and then for some real down-home cooking, something Mrs. George—being down home in Denton—mastered years ago. 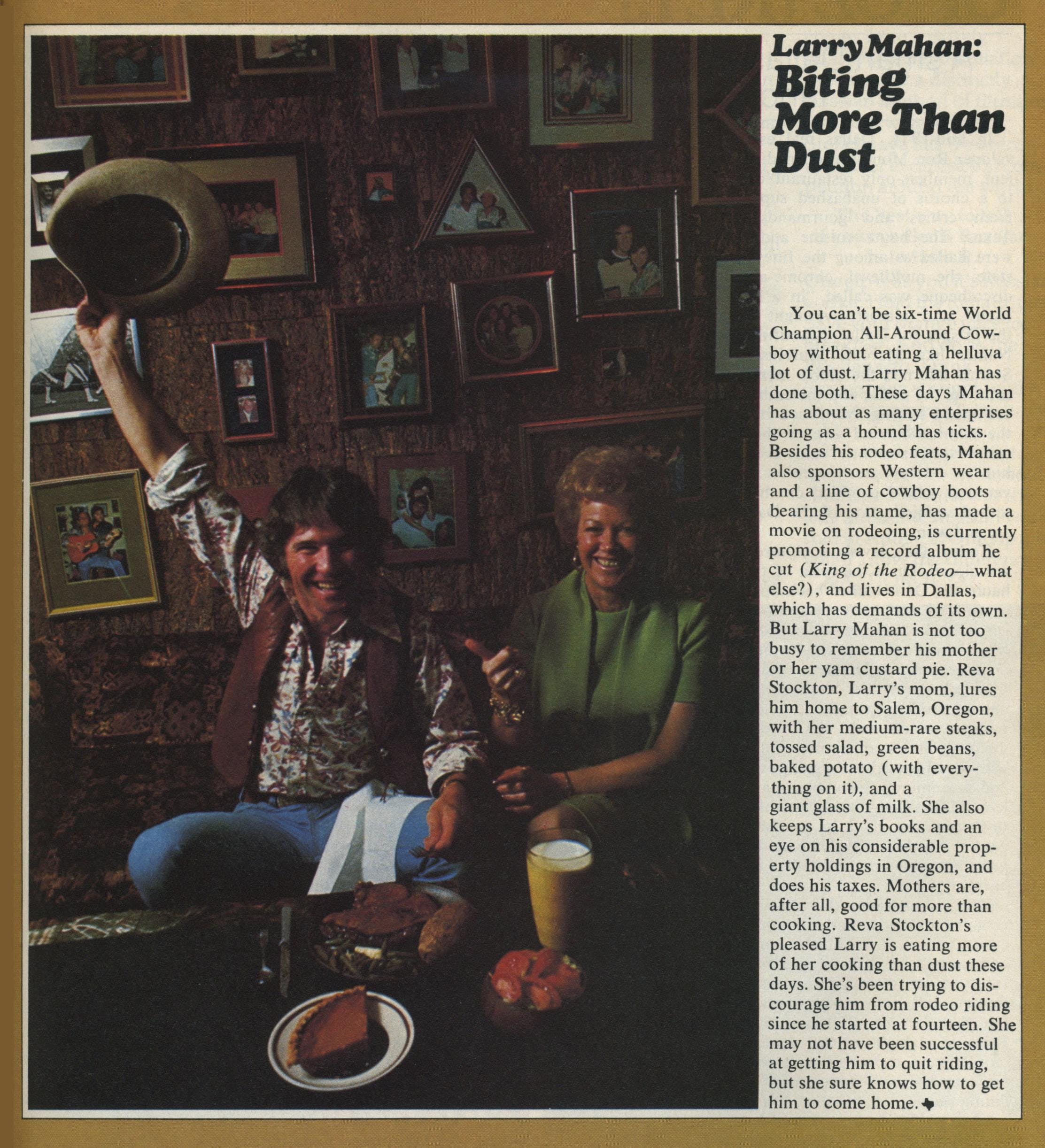 You can’t be six-time World Champion All-Around Cow­boy without eating a helluva lot of dust. Larry Mahan has done both. These days Mahan has about as many enterprises going as a hound has ticks. Besides his rodeo feats, Mahan also sponsors Western wear and a line of cowboy boots bearing his name, has made a movie on rodeoing, is currently promoting a record album he cut (King of the Rodeo—what else?), and lives in Dallas, which has demands of its own. But Larry Mahan is not too busy to remember his mother or her yam custard pie. Reva Stockton, Larry’s mom, lures him home to Salem, Oregon, with her medium-rare steaks, tossed salad, green beans, baked potato (with every­thing on it), and a giant glass of milk. She also keeps Larry’s books and an eye on his considerable prop­erty holdings in Oregon, and does his taxes. Mothers are, after all, good for more than cooking. Reva Stockton’s pleased Larry is eating more of her cooking than dust these days. She’s been trying to dis­courage him from rodeo riding since he started at fourteen. She may not have been successful at getting him to quit riding, but she sure knows how to get him to come home.