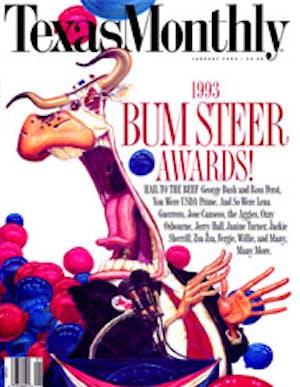 Dickinson Bay is as calm and dark as a cave. Dawn is at least an hour away, and I can’t see a thing except the orange glow of the radar scanner reflecting off the square-jawed face of C. L. Standley, who is standing at the wheel of the Captain Clyde. The 43-foot steel-hulled trawler is headed out to drag for shrimp. It is a mild day in the middle of November, and the water is warm, not ideal for shrimping. A snappy cold front would be better, or a big full moon, or a storm—anything unusual to get the shrimp excited. Standley talks on the radio to a couple of boats ahead of us. Voices in a variety of rich East Texas and cajun accents come back through the night.

The shrimp we are after is a little-known treasure, the sweet young bay shrimp. A delicacy of the Gulf Coast, the bay shrimp is simply a juvenile Gulf shrimp. But the difference is striking: The bay shrimp is to the adult Gulf shrimp what a spring chicken is to a stewing hen. Netted in the Gulf of Mexico, adult shrimp are big and frequently tough. More importantly, they are often highly processed—not to mention frozen and thawed at least once before they ever reach market—which can ruin their taste and texture.

Bay shrimp are a different story. Spawned in the Gulf, tiny baby shrimp drift with the tide into the bays and spend critical months of their lives there before migrating back into the Gulf. During this time in the bays, they are at their succulent best. Tender and virginal, bay shrimp—particularly the white shrimp—are the choice of connoisseurs all along the Gulf and as far away as Japan. Not readily available in supermarkets but definitely worth seeking out, fresh white bay shrimp will change your idea of the way shrimp should taste.

Outside of those in the business, however, few Texans know the difference between a bay shrimp and a Gulf shrimp. Nor do they realize that the majority of the shrimp sold locally in restaurants and markets are not Gulf Coast shrimp at all. Today more than 75 percent of all the shrimp sold in this country is imported from Japan, China, Thailand, Taiwan, Ecuador, Indonesia, and Mexico. Nearly one third and perhaps as much as three fourths of the imported shrimp are raised on shrimp farms, an industry that has developed worldwide in the past ten to fifteen years. The fresh wild shrimp, the king of the Texas coast, is virtually a stranger in its own state.

With a little effort, you can get good shrimp in Texas, but more often than not the shrimp caught in the bountiful Gulf¬—or in deep water anywhere in the world—have lost whatever taste and texture they had long before they reach market. Harvested by large freezer or ice boats that sometimes stay at sea for twenty to forty days at a time, many Gulf shrimp are coated with sodium metabisulfite to preserve their appearance or corn syrup to prevent freezer burn. Some are soaked in brine, frozen, thawed, and refrozen during processing, and on top of that, they may be stored for as long as a year at a time in freezer warehouses. The result can be a terminally bland shrimp with a rubbery or cottony texture and a chemical aftertaste. (The occasional unpleasant iodine taste of big shrimp is a natural result of their diet, not of processing.)

In short, a good shrimp is hard to find. But there are ways.

The Captain Clyde is a side-rigged trawler, and Martin Martinez—Standley’s longtime deckhand—has readied the green nylon nets by the time the boat nears Marker 44, in the middle of Galveston Bay. Despite dioxin spills and other pollution, channel dredging, and fish kills by water-sucking power plants, Galveston Bay remains the most productive bay for shrimp on the Texas coast. While recent studies have raised some concern about contamination of seafood in the bay, shrimp—which are usually caught before they are a year old and occupy a niche near the bottom rather than the top of the food chain—are considered among the safest seafood to eat.

During the height of the white shrimp season, in August and September, Standley and Martinez might stay out for two or three days at a time. There is no government-set limit on the white shrimp catch, and they can haul in as many as they can store on ice in the hold below the deck. But on most of his runs, the 54-year-old Standley, like other bay shrimpers, makes day trips, bringing his fresh catch, untreated by preservatives and unfrozen, directly into the fish house on Dickinson Bayou in San Leon.

Some half a dozen shrimp boats, their running lights bobbing up and down in the predawn darkness, rest next to channel markers between here and Morgan’s Point, waiting for the legal time for shrimping to begin: thirty minutes before sunrise. Giving the wheel to Martinez, Standley goes to the flat, open stern of the boat to set the big trawl net himself. The seventy-foot-wide net is lined with lead weights and rollers at its bottom edge. With a grinding of pulleys, chains, cables, and gears, and a great screeching of sea gulls, the huge net disappears into the now bluish-gray water on the starboard side. Against an outgoing tide, the shrimp boat moves slowly, negotiating a passage among the giant tankers and cargo ships that slide past in the growing daylight.

“Every day is different,” Standley, who has been a full-time bay shrimper for nearly twenty years. “Every drag is different.”

The shrimp industry in the Gulf of Mexico is the most valuable fishery in the U.S., with a higher dollar value than even the famous salmon fishery off the Pacific Northwest coast. In 1991 Texas shrimpers produced a record 96 million pounds of head-on shrimp, which had a dockside value of $197 million. Of the total Gulf harvest, 42 percent came from Texas shrimpers. Many shrimp caught in the bays, however, go unreported.

Despite its productivity, the Texas shrimp fleet—which is really two separate commercial entities, in the bays and in the Gulf¬—is growing smaller. The precise meaning of this is disputed. Depending on whom you talk to, the industry is either declining or leveling off to a sustainable number of boats. The fact is, the shrimp fleet, estimated at around two thousand to four thousand vessels—about 60 percent smaller bay boats and 40 percent larger Gulf boats—is probably half of what it was at its peak in the mid-eighties. The reason for the diminished fleet is competition from cheaper, imported shrimp and farm-raised shrimp. The catch itself has remained fairly steady in the past eight to ten years, but the price paid to shrimpers has dropped by about 75 cents a pound. Nowadays, a skilled shrimper is doing well to make $20,000 or $30,000 annually; Standley remembers that shrimping “was a pretty lucrative profession for a good fisherman in the fifties and early sixties.” Today Standley receives 50 cents to $2 a pound for his head-on shrimp, depending on size, and figures he needs to gross about $200 a day just to break even.

Upon a signal from Standley, Martinez hauls up the net after about an hour and a half of trawling and dumps the contents onto the white deck. The sea gulls scream and flock in close. Among the tiny eels, dogfish, croakers, catfish, and blue crabs, Standley reaps a harvest of six kinds of shrimp, the majority of them white shrimp, this being white shrimp season. In addition, there are brown shrimp, pinks, hoppers, sea bobs, and blood shrimp, also called broken-backs. All of the shrimp are marketable, the broken-backs in particular growing in importance to offshore shrimpers. They look almost transparent, the fluids of their bodies clearly visible through their glassy shells. Also crawling about the deck are caterpillarlike shrimp called sea lice, with hard yellow-tinted shells. Martinez throws them overboard. Another hard-shelled shrimp, the mild-tasting rock shrimp, is sometimes caught in the bays, more often offshore, and sometimes shows up in seafood markets.

Standley decides to call it quits around one o’clock because his net has been torn on a submerged buoy. At Hillman’s Seafood, he and Martinez unload two large plastic bushel baskets full of bay shrimp. The haul is 135 pounds, more than they expected. The shrimp are graded as 41-50 count per pound and immediately placed on ice in bins inside the shop. They will be sold as small to medium head-on shrimp to distributors, peddlers, and waiting customers. “Shrimp this fresh can be eaten raw,” says David Sager, the owner of Seafood Plus in Sugar Land, a high-class purveyor who ships Gulf Coast bay shrimp all the way to Tokyo to make sushi.

It is from humble fish houses like Hillman’s on bays and waterways from Corpus Christi north that the finest and sweetest bay shrimp can be purchased. Bay shrimp also can be bought directly from boats, of course. But if you can’t make your way to a boat or a fish house, the peddlers who sell shrimp from trucks beside highways and near shopping centers all over the state are surprisingly reliable sources for bay shrimp as well as Gulf shrimp. According to a study done by Texas A&M University in the eighties, most of the trucks sell a clean, fresh product. The main thing to look for is well-drained ice chests. The shrimp should not be sitting in water.

The key to buying shrimp anywhere is determining if they are fresh, which is not difficult since old shrimp smell pretty bad. The all-important odor should be clean and seaweedy, and the color should be a translucent grayish brown with no black or brown spots on the flesh. The shell should be firm and intact with no whiteness, and the head should be attached to the body. The head contains the shrimp’s digestive gland—the hepatopancreas—and is the first thing to decompose, giving the buyer an early warning signal that the shrimp is past its prime. A head-on shrimp will retain its flavor for about 48 hours. The reason that most shrimp are immediately deheaded is to retard spoilage and to cater to the domestic market, Americans being virtually the only people in the world who remove the head before cooking. Shrimp, like crawfish, should be boiled with the head on; it enhances the flavor and the resulting stock is excellent.

Texas’ favorite seafood is shrimp. But we have become so accustomed to tasteless jumbo shrimp that we habitually drown them in ketchup or cocktail sauce. It’s time to stop doing that. Plan ahead and make a pilgrimage to the Gulf Coast this year, seek out a fish house or a bay boat, and see what fresh shrimp really taste like. There is sweet salvation in the bays.