Ronnie Weiershausen is a rare breed. Although most every barbecue joint out there is using an offset smoker or a rotisserie, Weiershausen still prefers the old-fashioned way of burning oak logs down to coals to feed the pits at Ronnie’s BBQ in Johnson City. The smell of fat dripping onto the hot coals perfumes the gravel parking lot, and even the highway just beyond it if the wind is just right. It’s the smell of direct-heat cooking, which is still practiced by a handful of Texas barbecue joints, mostly in the Hill Country. “It’s dying out,” Weiershausen tells me as he deposits a shovelful of coals under a dozen sizzling briskets. “You can’t hardly find anyone who wants to work with this heat.” 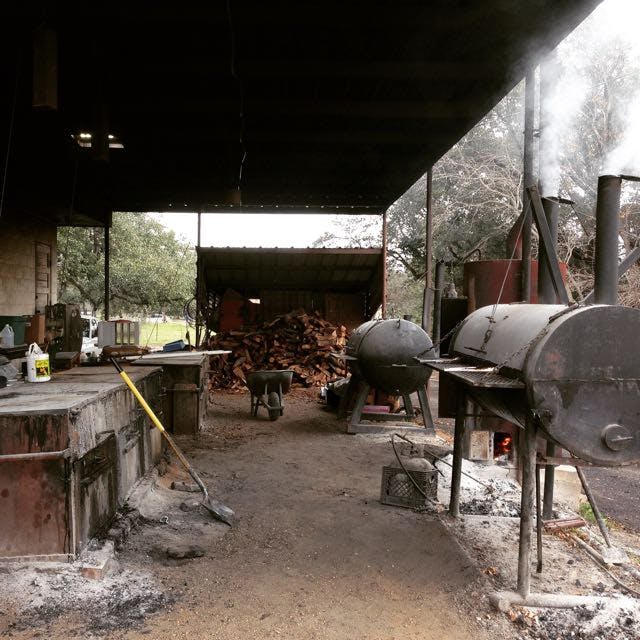 Weiershausen was focused more on ice than fire when he started the business with his wife, Cindy, in 1976. Before it was Ronnie’s BBQ it was Ronnie’s Grocery, a convenience store that peddled beer and snacks. He added a new edible revenue stream to the snack selection in 1985. “I started cooking barbecue to supplement, and I ended up just wiping the store out.” Rows of soft drinks behind the glass doors of a cooler are all that remain, but he doesn’t miss the store. “Since I’ve started barbecuing, I’ve never had a down year.”

On a Wednesday just before noon, I snuck in just before thirty or so large men—all with the same work uniform—lined up for lunch. A $19 sampler platter of all the meats (there were seven if you count both types of sausage, which came from City Market in Schulenburg) and two sides was too good of a deal to pass up. 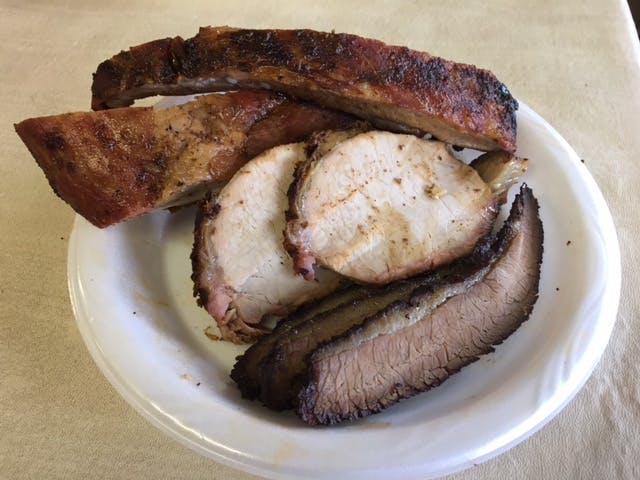 Slices of pork loin had all of the flavor I was hoping for after observing the pit situation, but the meat was also as dry as a communion wafer. That’s an inevitable risk when letting the cooking pit also serve as the warming pit, but it was the only real misstep in the meat sampler. Spare ribs that cooked beside the loin were pleasantly chewy with ample saltiness. They carried the essence of the fat-spattered coals that cooked them, but the flavor was mingled with an acidic mop sauce. “I sop everything,” Weiershausen told me. It’s one of the cooking techniques passed down from his father, and it worked just as beautifully on thin pork steaks during a previous visit. 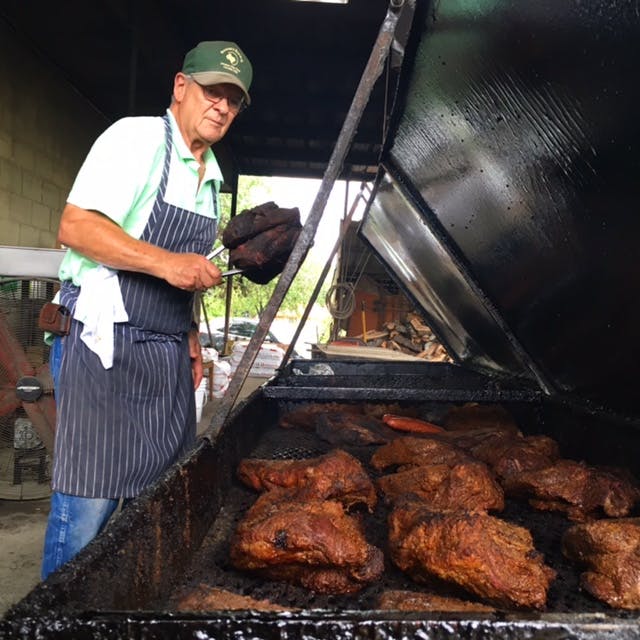 Small briskets are preferred in direct-heat cooking, and it’s no different at Ronnie’s. Weiershausen cooks them for twelve hours, but don’t expect a slow-smoked flavor. The slices taste closer to grilled meat, and the crunchy bark isn’t something you can achieve in an offset smoker. It wouldn’t win any competitions, but that might be why I liked it so much.

Smoked turkey could easily get lost on a menu this big, but then you’d miss out on one of the best in Texas. Hell, let’s just call it the best. I fell in love with it on my first visit, and on this latest trip I couldn’t help but shake my head in disbelief with every bite. How could it really be this good? It’s boneless poultry, after all, but poultry that has been cooked alongside fatty pork ribs. It was as if the flavor of smoked pork fat had been distilled onto the surface of the turkey, probably due to the magic of direct-heat cooking. The next time I stop in, I’ll be tempted to take home an entire turkey breast. 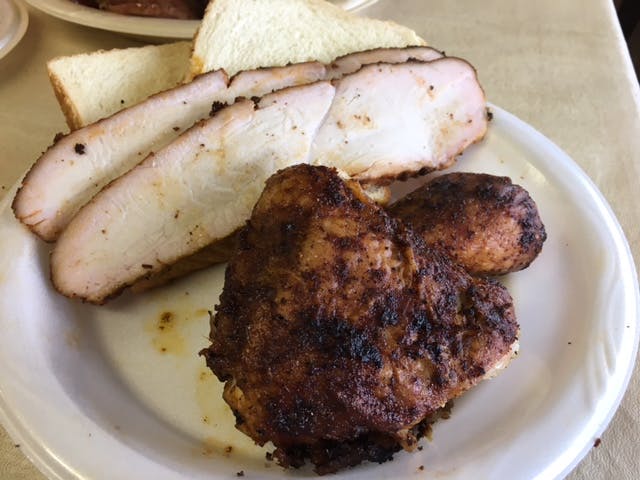 The chicken was no slouch, either. Juicy meat covered by crisp, well-seasoned skin is always a winner. The bacon that enveloped a stuffed jalapeño was also adequately crisp, making me wish I had asked for more than one. 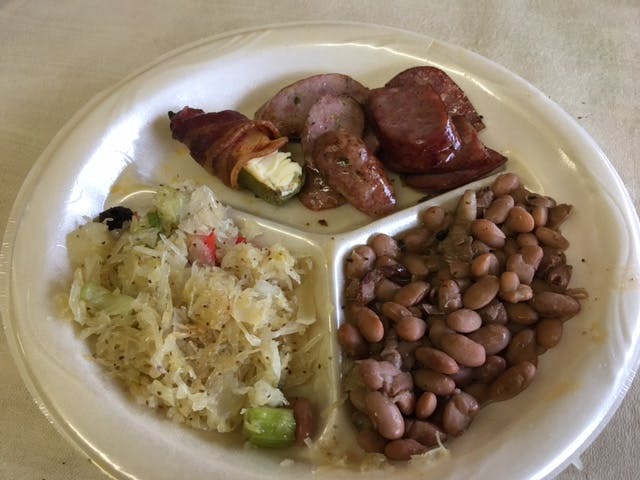 The slices of buttermilk pie on display made the dessert choice easy. But with so many side options, that decision was a different story. One of them sounded too awful not to order; sauerkraut salad is made from rinsed, drained, and squeezed (“to get all the sour out”) kraut mixed with white sugar, onions, celery, and celery seed. That description won’t ease your skepticism, but I was pleasantly surprised. The pinto beans, made daily from dry beans, are more traditional. The trick, according to Weiershausen, is to “use good bacon, and I put in garlic, salt, and pepper. That’s all.” He’s not a man of secrets. 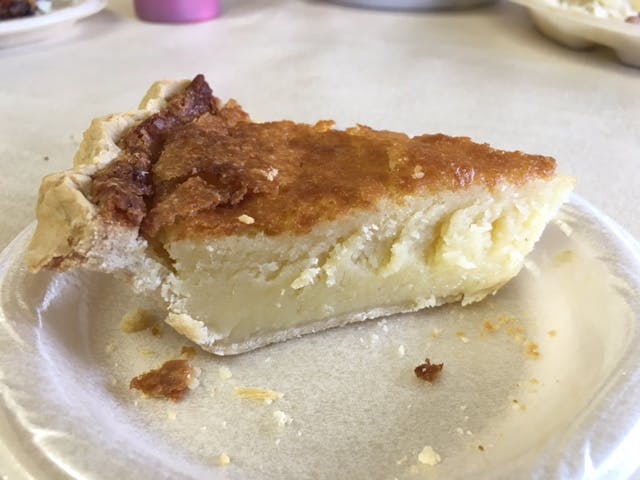 Ronnie’s is an independently run, small-town barbecue joint that’s keeping a traditional cooking method alive. Weiershausen has chosen the hard way and cooks all the meat himself. “If I’m sick, we’re closed,” he joked. There just aren’t many people who want to work that hard, even in barbecue, and for those reasons alone, the Weiershausens should be commended. But thankfully, the great barbecue should be commended too.