Dallas super chef Dean Fearing did not get where he is today by being a shrinking violet. Or lacking ambition. Noticing that no one had written a cookbook named The Texas Food Bible, he claimed the title for his own. As a result, The Texas Food Bible: From Legendary Dishes to New Classics is now out from Grand Central Publishing ($30). 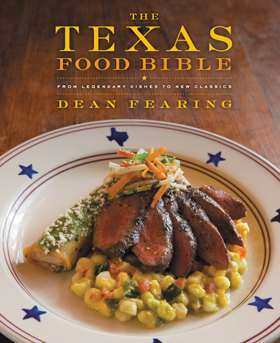 In the 256-page book, lavishly illustrated with photography by Dave Carlin, Fearing looks back on dishes he has developed over a career that spans some thirty years, including two decades at the celebrated Mansion on Turtle Creek Hotel in Dallas and seven-plus years at his own restaurant, Fearing’s, which opened at the Dallas Ritz Carlton in 2007. (Texas Monthly named Fearing’s the best new restaurant in the state in 2008.)

Fans will be happy to know that it includes signature dishes (and adaptations) from both restaurants, such as enchiladas with griddled jalapeño potatoes, charred corn and chorizo street tacos, and avocado fries. But he also throws in recipes he’s come across and fallen in love with, like smoky bacon barbecue sauce. Many of the selections pay homage to Southwestern Cuisine, the popular culinary movement that Fearing co-founded with other Texas chefs in the mid-nineteen-eighties.

There is still time to catch him on his short book tour. On Thursday, May 8, he will do a book signing and dinner in conjunction with the Twig Book shop and NAO restaurant in San Antonio. On Saturday, May 10, he will sign books at Neiman Marcus at 8687 North Central Expy, Suite 400, Dallas. On May 24, he will be at Neiman Marcus at 2100 Green Oaks Road in Fort Worth.

Here’s his take on barbecued quail: