Callinectes sapidus, the “savory beautiful swimmer.” Is there any other creature so doomed by its scientific name? One can only hope that the blue crab who’s got the gonopods to make his home in the Gulf of Mexico is plenty tenacious, otherwise in store for him is a starring role in a delicacy unique to a tiny sliver of coastal Texas, a preparation whose very name evokes misty-eyed musings in generations of beachgoers: barbecued crab. No, the crabs are not thrown on the “barbecue,” so to speak; they are relieved of their carapace and apron while still alive (though mercifully stupefied by an ice bath), dredged in zesty Cajun seasoning, and—this being Texas—deep-fried. A little violent, a little messy, a little dangerous, what with the sharp shells and hot oil, this style of crab cookery befits the salty, sticky, gritty land of its birth (Sabine Pass, at a forties-era roadhouse). Local seafood joints (Sartin’s, most famously) carry on the tradition, ministering to the sun-baked and sand-coated, who while away whole afternoons downing beers and cracking shells in a ritual our own Patricia Sharpe described as “so primitive and so satisfying that it defies analysis.” The beautiful swimmer may not go gently, but it sure does go down good.

1. Get ahold of some live blue crabs (8 to 10 per person), which can usually be found at grocery stores, ethnic markets, and, of course, seafood purveyors (or buy them frozen, if you’re a wimp). Alternately, you can take a trip to the coast, armed, I’m told, with a bucket, a net, some string, and a chicken neck.

2. Visit Steven Zinski’s exhaustive Blue Crab Archives (bluecrab.info/cbyc.html) to learn how to clean and prepare the little fellas. Steely resolve on your part will be required, as stunning them in ice water and then ripping them asunder is part of the process. Try to avoid looking into their beady eyes or thinking of Sebastian from The Little Mermaid.

3. Split the bodies in half, then coat them in seasoning. Much energy has been expended by folks attempting to find or make an approximation of the no-longer-produced original spice mix, Sexton Alamo Zestful Seasoning. We tested four available brands and liked Bolner’s Fiesta Bar-B-Que Crab Seasoning the best.

4. Let them rest in the fridge for about an hour to give the seasoning time to sink in.

6. Set yourself up (preferably outside) with ice-cold beers, multiple rolls of paper towels, and a trash receptacle, then hunker down and get to crackin’. 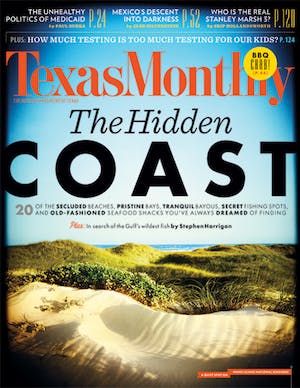