The carefully arranged pile of dainty carrots looks like some exotic flower, or maybe a spiky orange-and-white starfish. Radiating from a pool of pale green cilantro-spiked yogurt, the young root vegetables are sided by pumpkin seeds and mezcal-plumped raisins and garnished with crimson-veined sorrel. The arrangement is almost too pretty to eat, but we force ourselves, reveling in the interplay of sweet versus salty, crisp versus soft.

“What inspired this dish?” I ask chef Jesse DeLeon. It’s a few days after the last of my four visits to Rosewood, the buzzy restaurant on Austin’s near East Side. “Luby’s cafeteria,” he says with a straight face. Actually, I can’t see his face, because we’re on the phone. But I don’t hear muffled laughter, so I’m pretty sure he’s serious. “When I was growing up in Victoria,” he explains, “my family would go to Luby’s for lunch every Sunday. My mom and sisters loved the carrot and raisin salad.” When he and two partners founded Rosewood, he became obsessed with creating an homage to a dish that brought such joy to his family. Initially the classically trained chef intended to vary the salad just a tad, but he couldn’t resist making changes each time he tried. After multiple iterations, it had somehow taken on an Indian identity, with whole carrots anchored by a creamy yogurt dressing married to a cilantro dip. It’s emblematic of what I have come to think of as the fast-and-loose school of culinary craft. Chefs have always taken liberties with recipes—they can’t help themselves. But of late, that tendency seems to be accelerating day by day. And five months after helping launch Rosewood, DeLeon has established himself as a mover and shaker in the growing trend.

That said, the place hardly looks like it’s harboring a culinary rebel. It occupies a two-story 1890 house with so much Victorian charm that honeymooners asked us to take their picture on the veranda one night. Inside are assorted small spaces designed to project different moods. Near the entrance is a lively little bar with stained-glass accents and dark woodwork. To the right are minimalist dining rooms with custom tables holding secret drawers for tableware and reading glasses. In the middle is the chef’s counter, where twosomes can lean in for tête-à-têtes or watch the action on a big flat-topped wood-burning stove.

Once you equip yourself with a beverage—I adored my G&T with lavender and grapefruit—you should jump right in and order Rosewood’s signature starter: a deep-fried soft-cooked duck egg. Jacketed in crunchy panko breading, the egg yields to the touch of a fork to expose a golden yolk that runs voluptuously onto a bed of sautéed mushrooms. Underneath is a novel chile pequin pesto; think pumpkin seeds, Thai basil, and aged cheddar spiked with just a bit of the famously spicy peppers. “I can never take the duck egg off the menu,” DeLeon says, sounding resigned and pleased at the same time.

The culinary influences of DeLeon’s  South Texas upbringing and heritage come into play on Rosewood’s frequently changing menu. If you’re a little fuzzy on what pan de campo is, think campout biscuit. It’s not Grandma quality, but it’s toasty and plenty good. The small plate comes with mild house-made ricotta (good for slathering) and a puree of grilled peaches (even better for slathering). Alongside are jerky-like slices of thick fried beef “bacon.” I’d eat that combo anywhere, anytime.

Other dishes have a looser but still distinctive Texas-Mexican identity. Tender grilled octopus proved to be a fine canvas for an inky black-garlic sauce, smooth and thick. Even better was an escabeche made not with the usual sliced carrots and jalapeños but with sweet pickled pear and a side of shiso leaves. Another south-of-the-border specialty, smoky sirloin asada, had positives and negatives. On the plus side was a crema of multiple green chiles with cilantro and diced-up nopales. A bit iffy were the generous slices of steak, tasty but tough-ish. On the minus side were the homemade tortillas supplied for taco-making. The flour ones were a tad stiff but flavorful. The corn version, which I tried twice, was so thick and undercooked, I’d sooner have eaten a damp dish towel.

If South Texas and Mexico together are the paterfamilias of this international menu, then Louisiana is the materfamilias. Inspired by his two years in the Crescent City, at the Windsor Court Hotel, the 38-year-old DeLeon wastes no time in embracing—and taking liberties with—the classics. Honestly, I couldn’t have picked the gumbo out of a lineup—I would have called the flower-adorned brew a very nice soup. It’s made with a dark roux, but it comes off subtle, the broth playing second fiddle to teeny diced fried green tomatoes and zucchini and rings of okra. The best part? The rice. And if you think that’s a ridiculous statement, then you haven’t tried Prairie Ronde rice from Louisiana, possibly the most soulful in the country.

That same rice also elevates the shrimp jambalaya, giving it the heft of a paella, with crispy bits strewn throughout, like the desirable crusty base that paella hounds prize. Crisp-tender shrimp float in the rich liquid; expertly fried oysters perch on top. Sweet-tart tendrils of candied lemon zest give the whole dish a magical lift.

Desserts are under the command and control of DeLeon’s kindred spirit, pastry chef Aria Alba. Like his creations, hers  have an eye for fashion. The so-called blackberry shortcake features a precision-cut rectangle of jelled berry-fennel compote, its deep purple hue contrasting with dabs of snowy marshmallow fluff and darling edible flowers. The Pineapple Upside Down gets a swoopy, Jetsons-like drizzle of caramel infused with the fermented pineapple drink tepache. There is something to like about all of the desserts—a lush candied pineapple slice, an opulent chocolate ganache—but technical problems intrude, like the stridently salty sesame brittle and uncuttable crust on the Mississippi Mudd. A ginger-and-carrot sorbet was so intense it bordered on medicinal, a shame because it could have been wonderful if it had just been dialed back.

The path that DeLeon and company are on—genre-jumping, playbook-messing, whatever you call it—was blazed in America four decades ago with the appearance of radical new “cuisines”: California, New American, Cajun, Southwestern, Pacific Rim. These movements spurned classic European recipes in favor of imagination and indigenous forms. In the past decade, this trend seems to have regathered strength. Disruption and reinvention aren’t just asides; they’re running the show. These experiments don’t always work, but when they do, watch out. 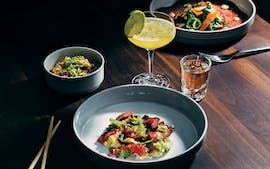 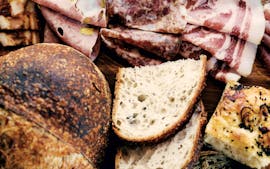 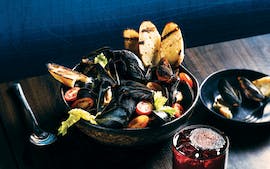 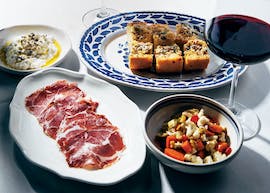 In Dallas, Perfect Union and Fachini Perform the Italian Two-Step