Texas Monthly adds and updates approximately sixty restaurant listings to our Dining Guide each month. There’s limited space in the print issue, but the entire searchable guide to the best of Texas cuisine is at your fingertips online!

The Victory Park district is exploding, and chef Kent Rathbun was quick to make the scene. The downstairs dining space is dark, modern, and hip. Upstairs is a late-night lounge attracting millennials and (occasionally) celebrities, who appear as if from nowhere thanks to a secret elevator. We started well with the succulent wagyu short rib pot stickers served in a bamboo steamer and sided with a spicy soy dipping sauce.

For an entrée we had the king crab with sriracha butter (the various roasted root chips were perfect for scooping up the rich corn and ginger puree underneath the large pieces of crab—we just wished there had been more of them). Our dieting friend went for the hirame: thin cuts of raw trout divinely covered in a tart yuzu-lemon sauce topped with microgreens and black Hawaiian lava salt. Though the menu focuses on freestyle dishes inspired by East Asian cuisines, there is also a lone curry from India.

The Odd Duck and Barley Swine team has reached peak fast-casual with its newest offering, which consists of two buildings: a counter coffee bar and an industrial cocktail lounge, connected by a large beer garden with picnic tables and games (cornhole, anyone?).

The all-day menu can be disorienting; the creamy smoked carrots are listed under “salads,” not “snacks,” which is where you’ll find the hearty potato-and-goat green-chile hash. The massive homemade pastries are tempting, but save your bread fix for the heavenly carbs that come with the menu’s “sandwichy things,” including a breakfast sandwich of goat chorizo verde and pimento scrammy (that does not mean it has an egg, although you add one—either duck or chicken—if desired), the bright and flavorful buffalo chicken steam bun (albeit more of a flatbread), and the wagyu burger, which, at $6, is quite the bargain during happy hour (a generous 2 to 6 p.m. occurrence Sundays through Thursdays).

On the lighter side, toasted chile-lime peanuts give the pressed melon salad a savory bite, and the shareable crab toast pairs well with one of Sour Duck’s inventive draft cocktails, such as the mezcal-falernum-watermelon concoction called the No Brainer. Wine, local beer (Celis, Jester King, Live Oak, etc.), and cider are also on tap.

Even if you never watched Fixer Upper, the wildly popular Waco-based HGTV show that concluded earlier this year, you’d still be happy you visited its stars’ spin-off venture, Magnolia Table. The decor is as crisp and airy as you would expect from design maven Joanna Gaines, and the basic, all-American food is good and generously served. We arrived early to try the Kind Breakfast—two well-scrambled eggs with wheat berry toast, fresh avocado, and tomatoes on greens—and the nicely poached eggs Benedict on biscuits.

At lunch, there are soups and sandwiches, our favorite being the cheeseburger with Havarti, arugula, and bacon-onion jam on brioche. Parking is limited and reservations aren’t taken, but they’ll add you to the list and give you a link that allows you to check your progress on your phone.

Just off West Commerce is an unlikely spot to find jerk chicken, but Jamaican chef Nicola Blaque has turned a former taqueria into a Caribbean destination, with rave reviews online and hungry folks in line. (By the way, she’s a grad of the local Culinary Institute of America.) Our favorite: oxtail, braised in aromatic Jamaican gravy and served with “rice N peas” and sautéed cabbage. Spicy chicken, falling off the bone, was mighty fine too.

Order by the plate or pound and expect to find your tongue a tad seared by meal’s end. The outdoor patios, filled with diners feasting on fried chicken wings with mac and cheese, are simple and spare, with shady communal picnic tables. Warning: the generously portioned food is often sold out long before the restaurant closes.

The night of our visit, shortly after the restaurant’s highly anticipated opening, chef-owner Nikki Tran greeted, seated, and visited with all of her diners. We began our “Viejun” (Vietnamese and Cajun) adventure with the Chef’s Rolls, pretty packages of slightly spicy stir-fried beef with basil and vermicelli wrapped in the vivid leaves of mustard greens.

Two of us shared the Saigon Sunrise, a bountiful platter of good eats including two large, thin grilled pork chops, a mound of toothsome shredded pork skin, and a tasty wedge of crab-and-pork cake (with it came a colorful array of mandoline-sliced nectarines, pears, and peach kimchi, and quite a bit more). The simple little space is freshly remodeled and shipshape. We look forward to further adventures.

Our reviews are written by critics who live in the cities and regions they cover. They remain anonymous to ensure that they receive no special treatment. The magazine pays for all meals and accepts no advertising or other consideration in exchange for a listing. Comments? Write us. 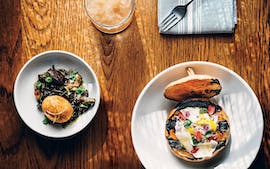 Culinary Risks Pay Off at Rosewood in East Austin 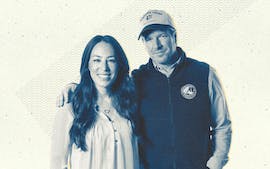 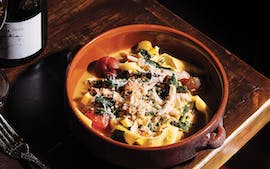 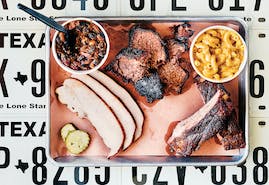