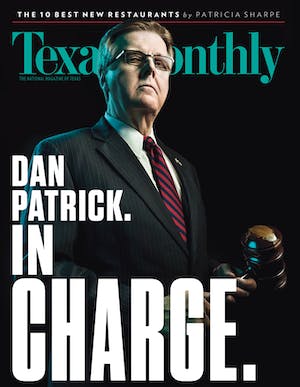 Frankly, I was worried. Three giants of the Texas restaurant industry—Mark’s in Houston, Stephan Pyles in Dallas, and Congress in Austin—closed their doors in the first half of 2016. At one time each had been the darling of its local scene, and they were no Johnny-come-latelies: Mark’s had been around for nineteen years, the other two a decade and a half-decade, respectively. But they fell out of favor, all at the same time. Were these, like the failure of Lehman Brothers, the earthquake before the tsunami? Short answer: It was indeed a year of change, but the restaurant community is resilient. And to prove it, chef-restaurateur Stephan Pyles is back in the game with his most stunning effort yet: Flora Street Cafe, which is my pick for the best Texas restaurant to open last year.

As for the rest of my annual ten choices, they range from a riotous Southern-food emporium to a tiny Japanese enclave with an extravagant tasting menu. In between there’s a Roman trattoria, a fine-dining room with a French flair, a steak- and chophouse, and a Chinese cafe ensconced in a strip center. The old guard passes, the new guard takes its place. Texas diners continue to eat very well indeed.

This is the sixteenth edition of  Where to Eat Now, and, for the record, the rules of the game are simple: for a restaurant to be considered, it must be the first Texas location and it must have opened between December 1, 2015, and December 1, 2016. That’s about it. Let’s eat!

Welcome to Stephan Pyles’s own private Texas. The force behind half a dozen major restaurants, the Dallas chef has walked an unusual tightrope over a three-decade career, honoring his West Texas roots while embracing complex modernist cuisine. The meeting ground between high style and homespun has reached its peak at Flora Street Cafe, a glittering jewel box of a space in the Dallas Arts District overseen by chef de cuisine Peter Barlow. “Every dish has a Texas element,” Pyles says, “even if it’s only a chile or a hint of smoke.” Some of those connections are straightforward, like the ribeye with a shimmering bone-marrow custard. Others are a culinary riddle, like the pozole, in which a handful of hominy and an alabaster filet of citrus-marinated black cod bask in a dusky broth brightened by shishito peppers. Pyles began in the eighties as one of the three Texas architects of Southwestern cuisine. His genius then was taking Texas, Mexican, and Southern ideas to places they’d never been before. With Flora Street Cafe, that genius continues. Opened May 31, 2016. D Mon–Sat.
2330 Flora
(214-580-7000)

Four days a week, a dozen or so lucky souls wend their way to an aerie above South Congress Avenue. Awaiting their arrival are young sushi chef Yoshi Okai and his merry band, ready and eager to slice the best fish in the city. Nothing has been left to chance, not the intimate room with its stunning backlit black and white stripes, not the sense of drama, not the engaging music (well, Queen’s “Fat Bottomed Girls” might not be everybody’s cup of green tea). Two menus are offered: on Wednesdays, globally sourced sushi and sashimi; other nights a mix of fish and meat. You might start with a mini-salad of fried shiitakes paired with the otherworldly crunch of jellyfish. For contrast, Okai offers rare duck, its fatty skin lightly singed and crispy. Twenty bite-size courses—chef’s choice—will run you $150 to $200 a person, not including gratuity or beverage. When’s your birthday? Opened March 2, 2016. D Wed–Sat.
1603 S. Congress Ave
(512-920-6405)

Before opening his modern trattoria Sprezza, Dallas chef and restaurateur Julian Barsotti took a Roman holiday. Actually, he took three of them. “I went to explore Roman street food,” he says. “Everyday fare.” He came away with a liberating truth. “I realized I couldn’t really replicate the food”—because the basic ingredients are so different—“but I could be true to its spirit.” As a result, Sprezza’s menu, under the direction of executive chef Ryan Ferguson, is rustic, spicy, and comforting. The house-made fior di latte mozzarella retains the freshness of the milk it was a few hours earlier. Lamb meatballs—lightened with currants and pine nuts and zapped with a tzatziki-like yogurt sauce—have an Eastern Mediterranean accent. And while the pizza may not be made with real Italian flour, it’s still Roman to the core: rectangular, crisp, and light on the cheese. Opened April 28, 2016. L Mon–Fri. D Mon–Sat.
4010 Maple Ave
(972-807-9388)

When chef-owner Andrew Weissman closed Le Rêve, in 2009, gourmands across Texas mourned. For eleven years the tiny place had been the most accomplished French restaurant in Texas, hailed by Gourmet and the New York Times. Then the economy dealt it a deathblow. Weissman did other concepts, an upscale osteria and a fine fish house, and even opened a falafel joint and a quick-food place in repurposed shipping containers. Now he’s back with his most luxurious effort yet. The spectacular interior suggests a lodge in the south of France. Signature’s elaborate presentations are so fabulous that diners stare as if they’ve just seen Botticelli’s Venus, or Beyoncé. The restaurant was mere weeks old when I visited and still refining its menu, but sublime sauces—such as the wine-and-mushroom-rich reduction on the sweetbreads—were already superb. The initial offerings dazzle with the likes of butter-poached lobster and duck foie gras torchon, and Weissman promises the best is yet to come—please oh please oh please. Opened November 21, 2016.L Mon–Sat. D 7 days.
16401 La Cantera Pkwy
(210-247-0176)

“I always wanted to do a little restaurant that cures my homesickness,” says chef-owner Nick Badovinus, who has spent 25 years in Dallas but still pines for Seattle. That mission is accomplished at Montlake Cut, a place where white tablecloths peacefully coexist with nautical tchotchkes galore. The name of the restaurant refers to the waterway between Puget Sound and Lake Washington, and, appropriately, seafood is what’s on the menu. Are you in the mood for something raw? There’s a changing roster of oysters, ceviches, and crudos, one standout being the platter of gorgeous yellowtail complemented by a copper-toned ponzu-dashi broth. For something fried—but still light—there’s the Parmesan-crusted sole lavished with lemon and capers. Carnivorous types will be pleased by the grilled New York strip crowned with garlic butter. It feels welcoming here whatever you’re in the mood to eat—and whether you’re homesick or not. Opened December 16, 2015. L Mon–Fri. D Mon–Sat.
8220 Westchester Dr
(214-739-8220)

The statue of a flying pig next to my chair did not bode well for a serious dining experience, nor did the wall of sound courtesy of a DJ prowling around on a catwalk high above the cavernous warehouse. But after a couple of bites into the mountain of food we had ordered, I was won over. Despite all odds, Ritual’s everything-but-the-kitchen-sink approach works. My red beans and rice was a heroic bowl of legumes in deep-flavored ham-hock broth, tricked out with Texas Gouda risotto and adorned by finger-size house-smoked kielbasa sausages. On top there were molasses-glazed baby carrots and, on the side, a golden round of cornbread. Who’s responsible for this winning take on Texas and Southern classics? Credit the fevered brain of restaurateur Ken Bridge and his willingness to twice change chefs. At press time, Crash Hethcox was in place. Hope for his sake the third time’s the charm. Opened June 14, 2016. L & D 7 days.
602 Studewood
(832-203-5180)

Top Knot is that place where you go for drinks after work and, without intending to, end up staying for dinner. It’s a sibling of Uchi, which is located downstairs, but things are less serious up here, in a glass-walled hideout with fun pink-and-orange artwork on one wall. You might start with a Mezcal Mule, along with a bowl of fried yuca chips and thick labneh yogurt for dipping. When your friendly server stops by to see if you’re ready for another round, oblige. Then proceed to order some scallop crudo with blood orange slices. Thirty minutes later, you’re starving, and you look at your friends and say, “Let’s split the steak,” a Japanese Miyazaki A5 strip loin. The fact that it’s $60 for four ounces doesn’t faze you—after all, you must see whether it is in fact the world’s finest beef. When you leave, you’ve had a big-deal meal, and all you did was meet for drinks. Opened February 3, 2016. D 7 days. B Sun.
2817 Maple Ave
(214-855-1354)

Some like it hot, and they’re in luck at this well-designed strip mall cafe decked out in red and black. As the name implies, you get peppers in two guises: as a multitude of fire-breathing Chinese chiles and also in the form of Sichuan peppercorns. They work in tandem, the chiles supplying heat and earthy flavor, the peppercorns causing your tongue and lips to tingle while making other flavors glow. Check out the full effects in Mountain City Noodle, a dark broth aswim with bok choy and topped with a ton of peanuts and scallions. Those who like it mild needn’t fret, though. Golden Egg and Sweet Corn, with a shower of salty preserved duck egg, is pure comfort. Owner Yunan Yang’s little cafe joins other pioneering restaurants that have brought the clear, intense flavors of Bellaire Boulevard—Houston’s far-flung Asian thoroughfare—to an eager audience in the heart of the city. Opened September 23, 2016. L & D Tue–Sun.
1915 W. Gray
(346-204-5644)

In a glass-enclosed space with a convivial counter up front and a deafening dining room at the back, chef and co-owner Fiore Tedesco makes a lasagna like no other. Instead of noodles, tomato sauce, and meat, his revelatory, more northerly version uses delectably crisped pasta sheets to embrace a trove of cheeses and a forest’s worth of mushrooms. The finishing touch is not red sauce but green-onion puree. The tradition tweaking doesn’t stop there. He takes a pork cutlet and snuggles it into the puffiest of fried-batter coats to make an updated milanese that Texans might call Italian chicken-fried steak. He spritzes roasted butternut squash slices with orange juice and then combines them with smoky pecan halves to create a salad that coolly echoes classic prosciutto and melon. Tedesco—who cooked at Manhattan’s Gramercy Tavern—may have come from a restaurant family in upstate New York, but this is not his papa’s trattoria. Opened June 15, 2016. D Wed–Mon. B Sat & Sun.
1900 Simond Ave
(737-212-1876)

Question: Given that there was barely enough room to shoehorn yet another steakhouse into downtown Austin, does anything make Red Ash stand out from the pack? Answer: an Italian accent. And judging by the orders of pappardelle with wild-boar Bolognese flying out of the kitchen, the idea is working very well. It also doesn’t hurt that the decor cleverly combines class (towers of flowers) and sass (a graffiti mural). Executive chef and owner John Carver knows, though, that his customers are first and foremost carnivorous. He keeps them happy with the likes of rosy wood-grilled lamb steaks and red snapper Livornese decked out with kalamata olives, capers, and roasted tomatoes. But what will doubtless prove to be his signature dish is the heavily mushroomed bruschetta with roasted bistecca drippings—a slab of rustic bread glistening under rivulets of steak gravy. The resemblance to Texas toast is neither coincidental nor unwelcome. Opened October 22, 2016. D 7 days.
303 Colorado
(512-379-2906) 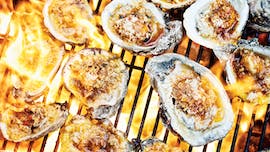 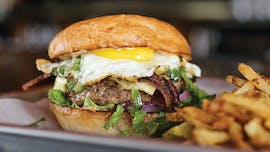 The 50 Greatest Burgers in Texas

By Patricia Sharpe and Texas Monthly 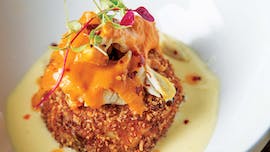