On Thursday, just half a block from the “Welcome to the United States of America” sign that greets people entering Brownsville via the international bridge, two Department of Homeland Security agents guarded a chain-link gate.

Unfolding behind the gate is a new experiment launched in South Texas this week by the Trump administration that targets the stream of asylum-seeking migrants from Central America. First started in the El Paso Border Patrol sector, the controversial Migrant Protection Protocols, better-known as “Return to Mexico,” are now underway in the Rio Grande Valley and Laredo sectors. Under MPP, once migrants seek asylum, they are given a hearing date and sent back to Mexico to wait, ostensibly under the protection of Mexican federal authorities who have promised to house and guard the migrants. But in Matamoros, at the opposite end of the international bridge from Brownsville, more than six hundred people live in tents on the streets—bathing and washing their clothes in the nearby Rio Grande. Immigrant advocates say they are vulnerable to cartels and other criminal predators. Day in and day out, the small city of migrants, most of whom are children, are at the mercy of church groups and nonprofits from both sides of the border for meals.

And unlike the MPP proceedings in San Diego and El Paso, the court hearings here are happening in secret. Despite, or maybe because of, concerns over due process and the dangers posed to migrants forced to wait in Mexico, the Department of Homeland Security has cloaked the process in a gauze of confusion, bureaucracy, and secrecy.

On Thursday, after a number of apparent false starts, the government finally started bringing migrants from Matamoros to Brownsville for hearings in hastily erected tents. In the morning, about 25 immigrant advocates and attorneys gathered near the “welcome to America” sign. Their goal: to get past those two guards to observe what they view as an illegal judicial process. As commuters streamed across the international port of entry a mere 25 yards away, the group marched toward the Homeland Security officers, in a scene reminiscent of the movie Gandhi. One by one, people approached the two agents and politely asked to be let in to view a hearing. Just as politely, the two men declined. Only attorneys who had already connected with clients would be allowed inside—almost surely a tiny fraction of all the migrants in the “Return to Mexico” program.

Karla Vargas, with the Texas Civil Rights Project, condemned the lack of access as illegal.

Meanwhile, several other attorneys went to the courtroom of immigration judge Delia Gonzalez in Harlingen to witness the proceedings. Carlos Garcia, an Edinburg immigration attorney, said six migrants were scheduled to have hearings; only two showed up and neither had an attorney. Both of them were told to return in October for another hearing.

“It was apparent that they were extremely confused about the process,” Garcia said. The complexities of asylum claims are mitigated by a lawyer explaining the process. But Garcia said migrants in Mexico have a tough time securing lawyers in the United States. “I was wondering where the four people were who didn’t show and why.”

On Wednesday, hours before I was scheduled to take a tour of the tent courtrooms—a visit that had been facilitated by U.S. Representative Filemon Vela, D-Brownsville, and approved by local immigration authorities—officials with Homeland Security in Washington, D.C., abruptly canceled the tour.

Asked for comment, a senior DHS official agreed to release a statement only if his name wasn’t used. He said that the “nature of the temporary hearing facilities”—located so close to ports of entry—necessitated that they “not be open to in-person public access, including media access.”

Homeland Security officials have also noted that the public can watch the proceedings, which are conducted via closed-circuit TV, from the courtrooms of the immigration judges. However, the judges hearing the cases in Brownsville could be located anywhere in the country.

Vela has condemned the process as unconstitutional. “It is no wonder that Trump endears himself to Vladimir Putin and Kim Jong-un,” he said. “His Migrant Protection Protocol is nothing more than a glaring obliteration of our Constitutional due process protections. The administration’s decision to block the press from the ensuing judicial process is a contemptible attack on the First Amendment.”

This post was updated to correct the spelling of Kim Jong-un. 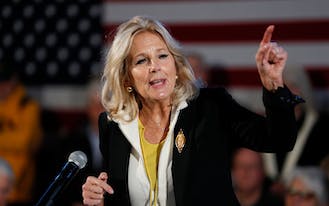