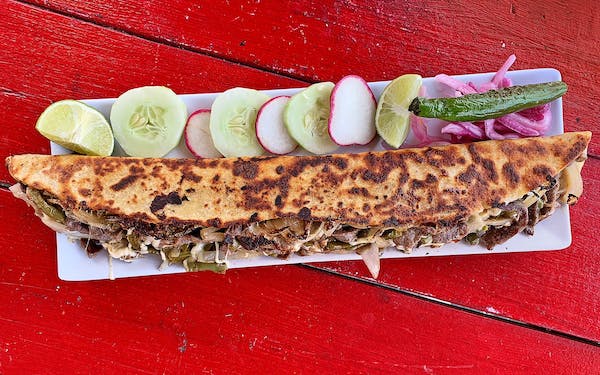 The Mexico City dish remains rare in Texas, but it's starting to take off in Austin. 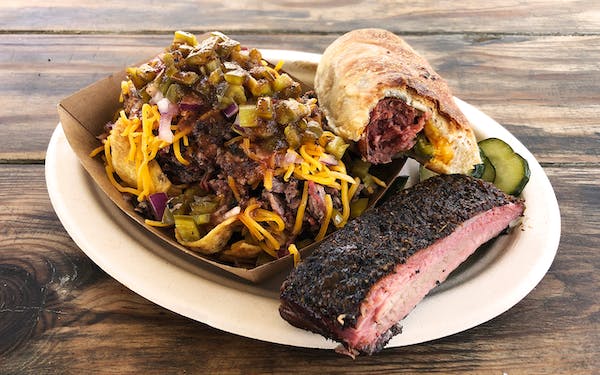 They’re technically klobasniky, but who cares what this Austin trailer calls them when you can enjoy brisket wrapped in sweet dough this delicious? 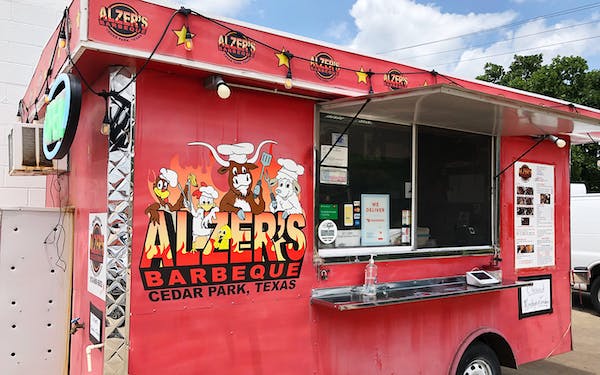 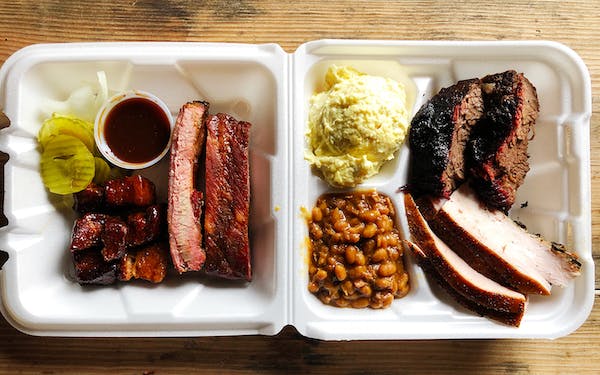 Opened in September, the Forney joint has already outgrown its trailer and ordered two smokers from the high school welding program. 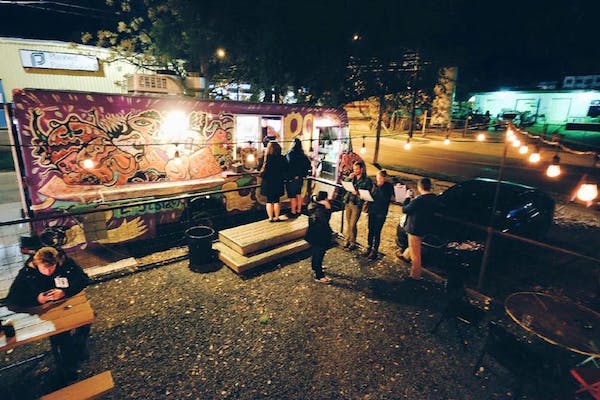 The federal law has been in place for 25 years, and dozens of Texas businesses may have to pay up for breaking it. 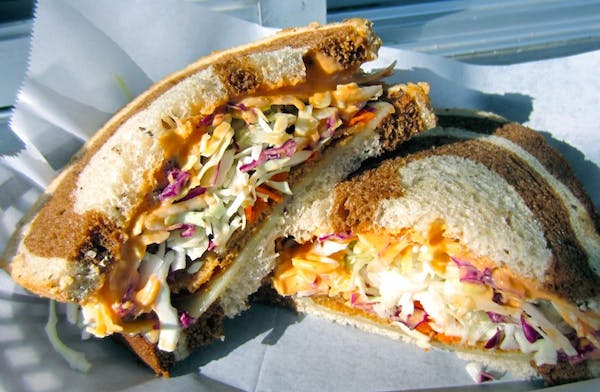 7 Food Trailers You Want to Visit

Austin's food truck scene has exploded in both numbers (hundreds of trucks are parked across the city at any given time) and popularity (waits can last up to an hour). With so many choices, it's hard to know which trailers are worth it, so here's our list of seven trucks to hit up during SXSW.

Paul Qui to Curate Selection of Eateries for SXSW

Austin’s South by Southwest (SXSW) festival is embracing a much more prominent culinary element this year with SouthBites, a curated line-up of gourmet food trucks and trailers. Paul Qui, executive chef/owner of East Side King and the yet-to-be-opened Qui, is in charge of orchestrating the new event. According to the …

Here’s another restaurant opening Austinites can add to their December dining list: East Side King, Paul Qui’s Asian-inspired street food concept, will open its newest location in the back building of Hole in the Wall on Tuesday, December 4. Photo taken by Christian Remde. This marks the fourth location…

East Side King‘s new food truck will reopen at 6 p.m. on Thursday (October 11) at the Grackle with a revamped menu. “The food is surprisingly refined for a food truck,” Qui told TEXAS MONTHLY. “We have items like saba (mackerel), quail,…

Austin’s Franklin Barbecue is making a few changes in the coming months, according to an interview owner Aaron Franklin did with Eater National this week. In the detailed interview, Franklin touched on changing up the space…

Torchy’s Tacos is quickly making the rounds in Texas. The taco madness all began at a small trailer in Austin. That little trailer helped sprout several brick-and-mortar locations. Over time, Torchy’s grew and is now exploding onto the Dallas and Houston culinary scenes. The taco establishment seems to be opening a new location every…

For the past few years, food trailers, trucks, and carts have rivaled the traditional brick-and-mortar building as primary sources of delicious, affordable modern cuisine. In fact, take a look around the state of Texas and you’ll see cities like Houston, Austin, and even Dallas jumping on the mobile food wagon…

There aren’t many Anna Wintours out there in the world. In fact, most magazine editors generally prefer to stay hidden from the glare of media exposure. Glued to recorders and notepads, they are the ones who conduct interviews, the ones who bury themselves in… 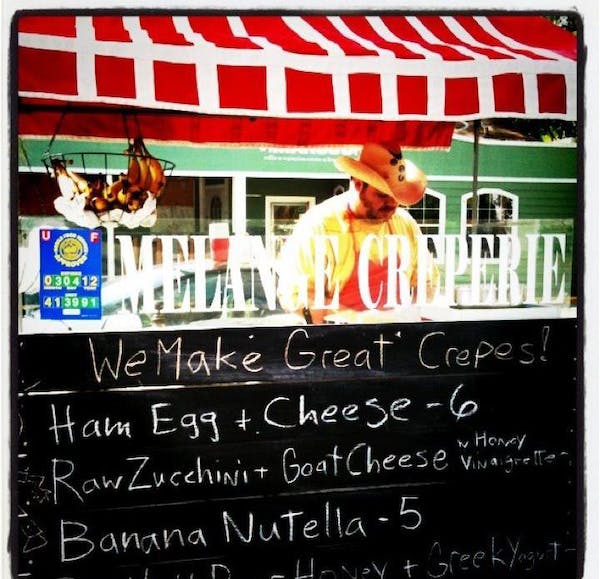 Is Houston’s Food Truck Scene Finally Having Its Moment?

A three-star Chronicle review for the Melange Creperie trailer and a call to arms in the Press both suggest a tipping point for the industry.

How a food truck scene evolves. First, trucks move around from place to place, in many cases because that’s what city law requires. Then they find a parking lot or vacant lot in which to stay parked all the time. If the landlord has more room to add… 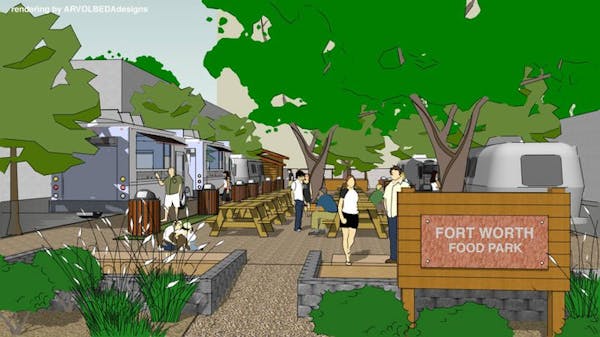 Fort Worth Gets the Metroplex’s First Food Truck Park

In a city where most food trucks are required to be mobile, a new cluster near the West Seventh Street entertainment district will be the prominent exception.

For the grand opening of his new “veggie-centric” food trailer, Soular Food Garden, Hoover Alexander invited attendees to take a celebratory stroll with him around his childhood stomping grounds. The small group began their walk at the trailer’s East 12th street plot, continued to his church’s community garden, and finished at the high school where his parents first met. Along the way, Alexander detailed his memories of living and cooking just east of IH-35. “Soular Food Garden came out of a desire to literally and metaphorically get back to my roots," Alexander said. "All of these things stirred around in my head in what I call ‘the divine stirring of the pudding.’ Thirteen years ago I opened Hoover’s Cooking, and I’d describe it as almost a spiritual experience. We looked at a lot of different places to open up, but it was meant to be here in the East Side. The same goes for Soular Food Garden. I’ve closed my eyes and taken a leap of faith.” The two establishments couldn’t sit further away from one another on the lifestyle spectrum. Frequenters at Hoover’s know the menu isn't “veggie-centric," unless crunchy fried okra, creamy macaroni and cheese, and sweet candied yams count. The healthier, greener menu choices of Soular Food Garden are Alexander's personal choice, a result of his efforts to take better care of his own health. By incorporating more vegetables into his eating habits, the chef has already lost 30 pounds. “I’ve got some work to do in terms of health and wellness, and the idea of taking baby steps resonated with me. I’m not an either/or kind of guy. I like my meat and ain’t no denying that,” he said. “This just gives me an opportunity to take a new direction. I can learn to plant some things, learn to grow some things, and just embrace what veggies have to offer.” It’s not that Alexander hasn’t always appreciated his Southern sides, but the affection for mashed potatoes and cowboy beans has been replaced with cleaner vegetables such as collard greens and beets. “I’m a product of the Texas culture,” he said. “But I’m going through a period of personal and business deconstruction.”

I first saw Japanese takoyaki - a delectably ambrosial octopus dumpling that has graced the shops and street corners of Japan for centuries - on an episode of Anthony Bourdain’s No Reservations. Immediately I hopped to my computer and conducted a frantic search for takoyaki restaurants in Texas. There had to be some Japanese transplant living the American Dream somewhere in Texas peddling authentic foods of the homeland to American foodies. There just had to be. Needless to say, I got nothing, not even a nibble. I should’ve known better. The extent of authentic Japanese cookery here is as far-reaching as a Philadelphia roll at happy hour on a store-bought tatami downtown. Then one fateful afternoon, a friend called me up and suggested we visit a new food truck: Love Balls. Putting other possible connotations aside, this truck really holds true to the name. “We make balls, and we put love into them,” says owner Gabe Rothschild, 27. They certainly do, with all entrees made right to order. The process is a meticulous and slow one, but it’s worth the approximate 10-20 minute wait. Each order of takoyaki comes with eight chewy chunks of octopus encased in a searing-hot ball of dough, seasoned to savory perfection and topped with a helpful heap of special Japanese mayo, powdered seaweed and bonito flakes. “We were eating at a lot of food trailers and something was missing: Japanese street food,” says Rothschild. “And we thought takoyaki was accessible, quirky and fit into the Austin food scene. Nobody was doing it town; nobody was even doing it in Texas. And we figured a lot of people would be interested, curious about it. And it was a form we could play with.”

Flickr/Sean Loyless Equipped with cash, personal utensils, and moist towelettes, a peaceable horde of eaters descended on the Gypsy Picnic Trailer Food Festival the minute the gates opened. Employing a divide-and-conquer approach, they dispersed to the forty or so trailers, only to return minutes…

When you think "BBQ in Lockhart," you think Kreuz & Smitty's - but a lot of people swear by Black's. And when you think "taco trailer on South 1st St.," you think Torchy's - but there's also Izzoz Tacos, which opened in December of 2008 in the same parking lot that the first Torchy's used to be in. Izzoz has since moved its 42-foot trailer (bigger than some restaurant kitchens!) farther south, down to the corner of W. Monroe. But it's all still one big taco neighborhood. "A lot of people said 'you’re f’in crazy - why would you open up a taco trailer right across from Torchy's?,'" says Izzoz manager Adam Winters. "But we felt like we could compete. Other than the fried "avo," [avocado],  I don’t know if there’s too many similarities between our tacos and theirs." Now run by Winters and his wife, Jessica Galindo-Winters, Izzoz was originally started by Jessica's brother John Galindo, a professional chef whose resume includes stints at Wimberley's Cedar Grove Steakhouse, North at the Domain and Red House Pizzeria (he's now working for Texas A&M, having recently relocated to College Station with his girlfriend). The Galindo family's history with food in Austin goes back 50 years. They ran a restaurant called Casa Loma at E. 7th St. and Lydia; more recently they had a place of the same name in Wimberley. 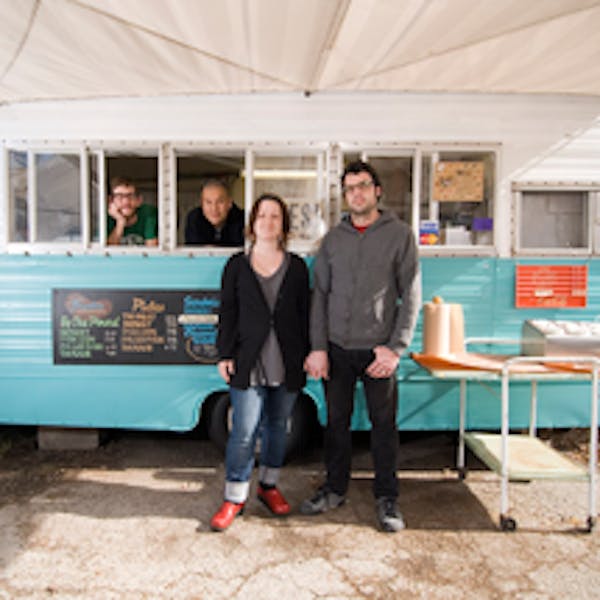 At a time when trailer food is all the rage, a few Austin restaurateurs are making the shift from mobile to brick and mortar—and lovin’ it.

I braved a sushi trailer in June and lived to tell about it. Starting today, I’ll be posting a weekly Trailer Thursday edition of our Eat My Words blog to let you know which food trailers are toothsome and which are tasteless. For my initial foray, I picked one that…