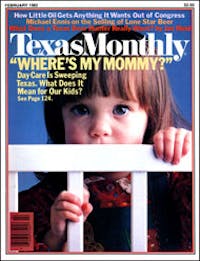 Remember when Howard Hughes was the richest man in the world? This wastebasket-size piece of equipment is the reason. It costs $3,500, weighs 78 pounds, and can turn up to a hundred times a minute. It’s called a tricone rotary rock drill bit and is used to drill oil wells. It’s made by the Hughes Tool Company, of Houston.

This bit’s ancestor, the two-cone rotary rock drill bit, was invented by Howard Robard Hughes, Sr., an Iowa boy who drifted to southeast Texas in the wake of the Spindletop discovery and started a drilling company in 1902 in partnership with a man named Walter Sharp. Like everyone who drilled for oil, Hughes had trouble getting holes through underground rock formations, because the drill bit then in use—a flat, sharp-edged piece of metal called a fishtail, which scraped its way through the rock—wore down too quickly. In 1906 he began experimenting with the idea of a bit consisting of two toothy, rotating steel cones that would pulverize the rock. He first tested his bit at Goose Creek in 1908, patented it in 1909, and immediately quit the drilling business and started the Sharp-Hughes Tool Company.

In 1912 Sharp died and Hughes bought up his interest in the company. In 1924, 54 years old and with 75 patents to his name, Howard Senior dropped dead at the office, and Howard Junior, his only child, dashing and 18, inherited the company. Legend has it that Howard Junior actually visited the Hughes Tool office only once in his life; the company listed his title as “owner.”

The secret of Hughes Tool’s success was that everybody who drills an oil well wants the best possible bit—running a rig is extremely expensive ($250 or more an hour), and the better the bit, the faster it goes. Hughes Tool made the best possible bit. In 1933 two Hughes engineers invented the tricone bit, which drilled holes straighter and faster, and for the seventeen years that the patent on it ran—1934 through 1951—Hughes’s market share approached 100 per cent. The bit found virtually all the oil discovered in the glory days of wildcatting, and Howard Junior got to be the richest man in the world. In 1972 he took the tool company public and made $150 million in cash the day it went on sale. The money from the drill bit made dozens of movies, took over Trans World Airways, and built a good chunk of Las Vegas, among other things. Even now half of Houston is fighting for a piece of the Hughes fortune.

Ever since 1952 it has been legal for other companies to sell tricone bits, but Hughes Tool has done just fine. The bit still has three cones, though the most advanced models (like the one shown here, the J-22) have bullet-shaped teeth made of tungsten carbide instead of pointed ones made of steel. Even without a corner on the tricone market, Hughes has about 40 per cent of the drill bit business in the world.