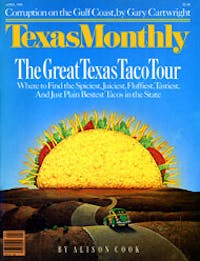 Like people, every statistic is famous for fifteen minutes. For the Hughes Tool Company’s rotary rig count, the moment in the sun came in early 1982. That’s when the company’s tabulation of how many oil-field rigs were burrowing into the earth’s crust plunged. It signaled the collapse of the energy industry—and placed a set of obscure four-digit numbers on front pages across the nation.

But to those in the oil business, and to those with money in it, the rig count has always been a subject of great interest. It is, simply put, the preeminent barometer of the health of the drilling business—and thus a key indicator for the entire energy industry. Stocks of giant companies can rise and fall with its release in Houston every Monday morning. The plummeting figures of 1982 foreshadowed a $91 million loss for Hughes Tool the next fiscal year—the company’s first red ink in half a century.

The Houston-based oil-field-equipment company began compiling the rig count in the thirties to plan its production. As low-profile as its reclusive single shareholder, Howard Hughes, the company nonetheless began releasing the numbers in January 1940 with hopes of gaining a marketing edge. The only weekly indicator of drilling activity, it immediately acquired great importance; the number of rigs dictated demand for expensive tools and oil-field employment and reflected the oil companies’ outlook regarding future oil and gas prices.

While most statistics are the product of mysterious calculations, compiling the rig count requires the arithmetic skills of an eight-year-old. It is merely a manual count of all land, inland, and offshore rigs in the United States. Hughes’s field salesmen gather the information in the course of their regular calls on rig operators. (Hughes also compiles a monthly worldwide count, but it is based largely on secondhand information.) In the old days the field counts were sent to Houston every Friday by mail, and the numbers were scheduled to be released, as today, on Monday morning. Now Hughes’s 190 salesmen file their data with three regional offices, which send the numbers to Houston by computer. Even so, the count remains an imperfect calculation. Rigs in Kentucky, Indiana, and Tennessee—where much truck-mounted equipment is used—are not all eyeballed, and a miscopied number has occasionally inflated drilling activity by five or ten rigs.

Today the keeper of the count is Ike Kerridge, a professional man of 61 who serves as Hughes’s vice president of stockholder relations. Each Monday morning before nine, Kerridge’s secretary records a ninety-second summary of the rig count on a telephone-answering machine. The phone number for the summary used to be restricted to a small circle of industry experts; now it has become widely known. It is a tribute to the rig count’s importance that Wall Street analysts complain that they can’t get through. Later in the day the full results are released to a mailing list of about three hundred.

For 44 years the Hughes rotary rig count went unchallenged. That era ended in 1984, when Hughes’s chief rival in the drill bit business, Smith International, launched a rig count of its own. Involved in a bitter patent infringement case with Hughes since 1972, Smith one-upped its rival by stating whether rigs were drilling for oil or gas and by breaking them down into three categories according to well depth. At first Hughes tried to ignore the upstart, but Kerridge later sniffed, “It serves a purpose.”

Although the rig count offers insight into the industry’s health, it presents risks as well. Since the count has historically dropped at the beginning of a new year—because of winter weather and exploration companies’ budget cycles—veteran count-watchers initially disregarded the 1982 slide. “We were not surprised when it started going down,” says Kerridge. “We were surprised when it kept going down through October.”

The fabled eighties collapse—a 60 percent drop over sixteen months, from 4,530 rigs to 1,807—was the most dramatic in rig-count history. But it was not the largest. The record, set in 1971, is a decline of 74 percent after a fifteen-year slide to 814 rigs. With today’s count at about 1,212 and dropping, the sobering lesson offered by rig-count history is that when things are bad, they can always get worse. It may just take a little time.