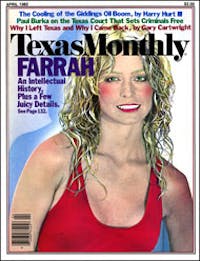 “I was coming from supper, and ven I got to the squvare, I hear the doggondest roaring that I ever see. I stopped and looked aroundt to see vat the matter was. I see that t’ing coming. It looked like to me that a t’ousand steam engines was a-puffing fire and smoke. I looked at that t’ing for a second, and then I says: ‘Markowitz, your time has come.’”

Mr. Markowitz, however, survived to give his account of the 1894 tornado that struck Emory, fifty miles east of Dallas, to the Dallas Morning News. But meeting a Texas tornado eye to eye is just as awesome today as it was back then.

Texas has more tornadoes than any other place in the U.S., about 120 a year. Most steamroller across the state from April to June, but tornadoes can hit any month and any hour. Two thirds of them hit ground just after the hottest part of the day, and intense lightning often comes along with them. Golf-ball-size hail, heavy rain, and a green sky are often signs of an imminent tornado, although the eerie light is associated with the hail, not the high winds.

Tornadoes are born out of thunderstorms, which result from cold and warm air colliding. The theory is that the cold air overtakes the warm air, which rushes upward to escape, and the cold air coming in from all sides gives the warm air its spin. Voilà, a vortex. The problem is that this is just a theory; no one yet knows what makes tornadoes rotate. Regardless, Texas is a great stage for tornadoes because it happens to be located where cold air from the Rockies runs into warm air from the Gulf. Most often a tornado forms out of a rotating, low-hanging appendage to a thunderhead called the wall cloud, which is usually located in the southwest portion of the thunderstorm.

Tornadoes rotate counterclockwise at speeds between a hundred and two hundred miles per hour. Considering how fast they whirl, tornadoes advance at a surprisingly slow speed, about thirty miles per hour, usually cutting a narrow swath a hundred or so yards wide. Most play out within two or four minutes after they touch the ground. But the only absolute rule is that no twister is the same as the one that came before it.

Weather forecasters are the first to admit that the human eye is far superior to radar when it comes to spotting tornadoes. The National Weather Service’s Skywarn program has trained more than four thousand volunteers in North Texas (where the worst tornadoes hit) to watch for severe weather. These folks chase after storms, transmitting the details back to the Weather Service over a designated ham radio frequency. Skywarn has saved a lot of lives and millions of dollars.

Four hundred people have been killed since 1950 in Texas tornadoes. Forty-five people died in the 1979 Wichita Falls tornado, 26 of them in their cars, a terrible place to be in a twister. The worst places are in a mobile home and downwind from a glass-walled high rise. You will almost surely ride out a tornado in safety if you are at home.

Engineers at Texas Tech’s Institute for Disaster Research have concluded from studying the rubble left by tornadoes that most building damage is the result of the force of the wind, and not the vacuum the tornado creates. That’s why, contrary to popular safety precautions, it is now recommended that you leave doors and windows closed.

Even though time and experience have made it a little easier to survive in Tornado Alley, there is no way to get rid of these devastating storms. Volatile, grandiose, and unruly, tornadoes are as much a part of Texas as rattlesnakes and scorpions.