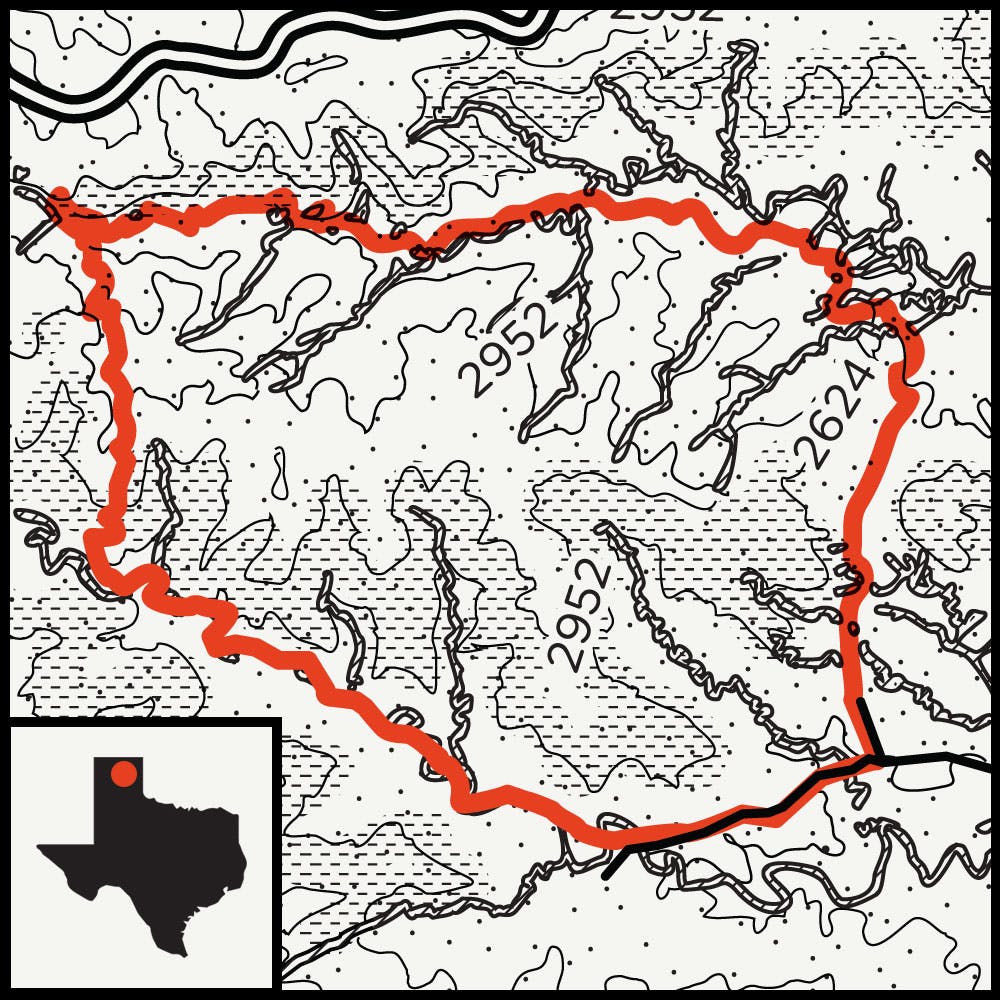 Up in the Panhandle, the High Plains give way to the legendary landscape of the Llano Estacado, an elevated plateau where rugged red-rock canyons offer panoramic journeys rivaling any in the state. One of them, the Palo Duro, is 120 miles long and nearly a thousand feet deep. Known as the Grand Canyon of Texas, its historical and geological marvels have been well documented. So in order to chart some new terrain, I lit out for the area, late last spring, with the Caprock canyons in mind instead.

The state park boasts 90 miles of trail, including a 64-mile repurposed railway that skirts the canyon’s southern boundary, but to find some quick elevation, I chose the Upper Canyon Trail. I spent the night in the South Prong camping area, about five miles from the park’s entrance. After a front-porch sunrise over the canyon, one of the Caprock’s virtues immediately became clear: I had the campground to myself. It came as little surprise, therefore, that the only footprints I encountered during my seven-mile hike belonged to coyote and deer, accompanied by a few unidentified piles of scat. I couldn’t seem to outrun my concern that a wily wild bison might be tucked into one of the juniper-lined ravines—the Texas State Bison Herd calls the park home—but the most intimidating creature I encountered was a collared lizard.

The state is full of potentially dangerous critters (rattlesnakes, alligators, mountain lions), but most animals will not attack unless provoked. If you encounter wildlife, just give them some room.

An hour or so in, the steep path that leads to the central mesas rose sharply above a set of twisted, coppery cliffs. As I stopped to rest, I considered the rough times that legendary chief Quanah Parker must have given the old cavalry troops who rode into this land in the late 1800s, during the last days of the Comanche empire. A line came to mind from Lubbock-born Max Crawford’s 1985 novel, Lords of the Plain, about the campaign to subdue the Comanche. “The cliffs above caught the late sun,” Crawford wrote, “the canyon walls bathed blood-red, the gypsum crystals sparkling as if the rocks were encrusted with diamonds.” The Caprock might not be a grand canyon, but the walls below and vistas beyond left me stunned nonetheless.

Before starting my descent, I came face-to-face with Fern Cave, where maidenhair ferns thrive on a perennial, hidden seep. The site, a shady respite on the trail, is every bit as lovely as Gorman Falls, in the Hill Country, or Fern Canyon, on the Rio Grande. One last set of switchbacks along the Canyon Loop Trail led me back to the main road, and the enduring hoodoos that towered in the distance delivered a final benediction.

Route: Paluxy River Trail to Overlook Trail to Black-capped Vireo Trail
Distance: 4 miles
Difficulty: Moderate. A trip around the park requires a fair amount of climbing, but hikers should be fine as long as they keep track of trail markers. 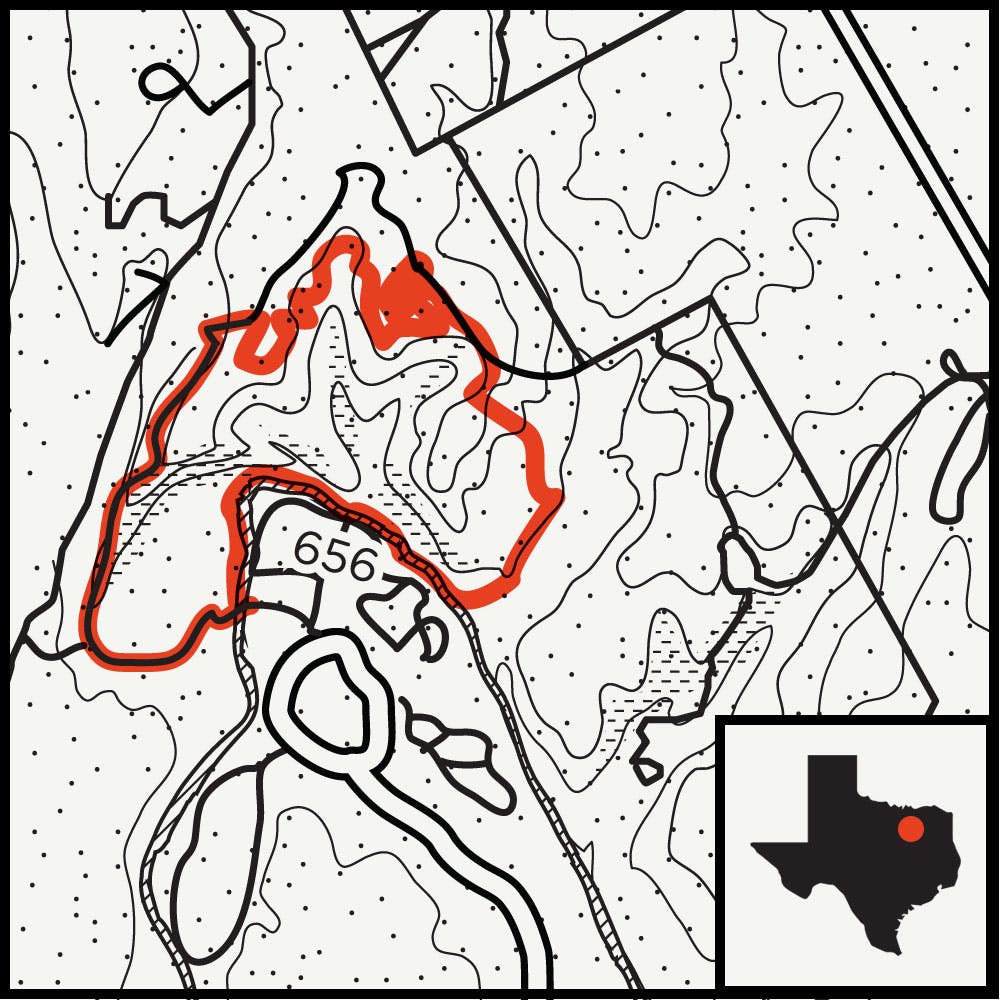 When we first arrived at Dinosaur Valley State Park, last summer, she had fussed about giving up her electronics and getting out of the car altogether. Now, enticed by the promise of the R. T. Bird Track Site, where, in 1937, a paleontologist first discovered fossilized sauropod tracks, she was ready to rally. And after following the dino prints for a short walk along the Paluxy River, we decided to take on more of the park.

We crossed the river and ascended a gravel trail that corkscrewed around a line of knotty cedar trees, reaching one of several marked scenic overlooks, where we had a stunning 180-degree view of the valley. We continued into the forest on a twisty section of single track, hoping to catch sight or sound of the endangered golden-cheeked warbler or black-capped vireo, two species that occupy this peaceful refuge. We peered over dry falls and watched for signs, and our persistence was rewarded when a painted bunting, one of the most colorful members of avian society, flitted out of a bush.

Back at the river, after our afternoon on the trail, we peeled off our boots and socks and let the minnows of the Paluxy give us a primitive pedicure.

You don’t always need to sleep outdoors for an overnight near the trail.

This scenic path covers sixteen miles along cedar-strewed ridges and connects to the waterfront Lush Resort.

For even more, check out hikes in South & Central Texas, East Texas, and West Texas.