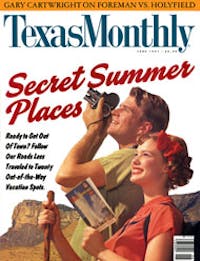 For years, indian pictographs in Texas were all but inaccessible. Then, in 1979, Seminole Canyon State Historical Park opened, offering walking tours to two caches of Archaic paintings. And in 1987 High Bridge Adventures started boat tours on Amistad International Reservoir near Del Rio, making available by water two shelters that could not be reached by land. Between the park and the boat tour, you can devise a splendid one- or two-day Indian rock art vacation.

The two-mile, ninety-minute guided tour through the park starts at the visitors’ center and descends 250 feet by stairs and over rocks to the bottom of Seminole Canyon. At Fate Bell Shelter and Fate Bell Annex, you can look back four thousand years in time. The dozens of stubby, often-faint stick men, birds, deer, centipedes and shamans daubed on the walls have a stolid dignity — and a sense that life and death were full of mysteries that could be delineated but never precisely defined. (Incidentally, the temperature on the canyon floor can reach 115 degrees in July and August, so wear a heat and sunscreen. The going is strenuous enough to tucker out a child under five.)

The indispensable second part of the rock art experience is High Bridge Adventures’ three-hour pontoon-boat excursion to two shelters, including the inimitable Panther Cave.* Manuel and Inez Hardwick are fine hosts and provide an informative running commentary. The trip will leave you feeling pensive, exhilarated, and very lucky to have seen these wonders before time erases them completely. by Patricia Sharpe

A guest need spend only one night in the historic Excelsior House in Jefferson to realize that the seventy good ladies of the Jessie Allen Wise Garden Club are skilled at more than tending flowers. If they run their own bedroom the way they operate the Excelsior House, they are the most accomplished mistresses of seduction in Texas.

The Excelsior House, which was built in the 1850’s, when Jefferson was a thriving riverboat town, is one of those bumpy old hotels filled with chandeliers, antiques, and magnolia blossoms floating in cut glass—the kind of place women love and men loathe. But the ladies of the garden club, which bought the hotel in 1961, have avoided the pitfalls that normally afflict bed-and-breakfast romance. The Excelsior House is neither too swishy (the Seth porcelain is there, but it’s not in your face) nor too earthy (you won’t find any oat-bran muffins here).

Instead, it is a yin-yang experience, a perfect balance of male and female energies. For men, it offers thick walls, strong water pressure, firm mattresses, remote-control televison, and scrambled eggs served with quarter-inch-thick pieces of country ham, biscuits, and homemade preserves. Conversely, it’s crammed with antiques only a woman could love (a rocking chair that folds out to make a cradle) and certain irresistable details such as tall pale-pink vases once owned by Lady Bird Johnson’s parents. Even the breakfast menu contains a bow to women: In addition to biscuits, there are bite-size orange-blossom muffins.

The best of the fourteen rooms is the Diamond Bessie Suite, which rents for only $95 a night. You can’t beat the Excelsior’s management strategy: low rates, high quality, and—incidentally—a nicely tended garden. by Jan Jarboe

For more on Jefferson, go to Genial Jefferson.

As most of us know, Caddo Lake is Texas’ only naturally formed lake, created from either an earthquake or a logjam on the Red River almost two hundred years ago. Nearly everyone who has gazed at its still waters, bordered by stately cypress trees draped with Spanish moss, would certainly argue that Caddo Lake is the prettiest lake in the state. But darn few realize that Caddo is also one of the region’s top spots for warm-water fly-fishing. That would be a credit to the chain pickerel—found nowhere else in this neck of the Piney Woods—a muskellunge that looks exactly how you’d expect a fish living in a primordial swamp to look. The fish is an aggressive striker that gives avid fly-fishermen like Secretary of State fits, which merely underscores Caddo’s status as the grande dame of Texas lakes. by Joe Nick Patoski

For information on the nearby town of Jefferson, go to Genial Jefferson.