I am almost 2,600 miles into my quest to circumnavigate Texas. This week was spent in the much-loved West Texas. It was great experiencing the vast and beautiful landscapes with friends and family. Without them, the mountainous miles would have been much more difficult. 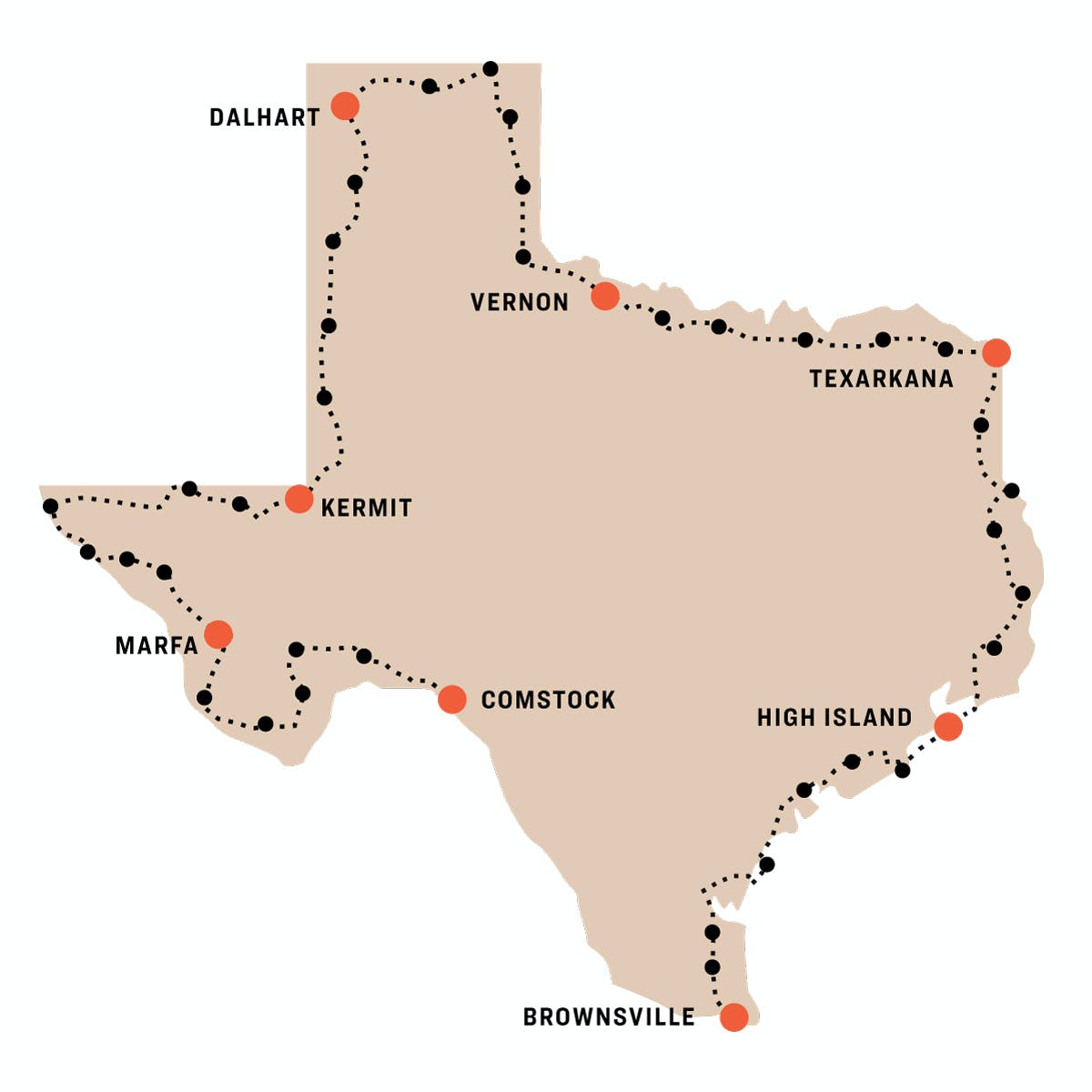 Last week ended with a surprise visit from my wife’s cousin, Anthony Galloway, and that is where things pick up this week on my rest day. Sure, I didn’t ride any miles, but we walked around plenty. We did our best to find shops or galleries open in town. Not much was open, but we did enjoy a few burritos from Marfa Burrito. Tony Drewry, from week three’s dispatch, came by for a visit as well. Before driving to Mexico, he entertained us with tales of West Texas and schooled us on the wonders of sotol. Don’t worry, I was able to rest, but I still found time to have a few beers, maybe a few too many—it’s not often Anthony, Javier, and myself are all in one place.

A friend from Austin, Jamie Javery, joined me for four days of riding. He rode from Marathon the day before and would stick with me all the way back to his car there. I made a plan with Jamie to meet at our house at 8 a.m. It was not a strict wheels-down, more of a gathering time. I slowly woke up around 7:45. The night before was a bit more celebratory than I was used to during this trip. Javier and Anthony were already up and ready to go. Jamie was on time and we set off about fifteen minutes later. Anthony was going to ride with us for the first ten miles or so. It was pretty leaving Marfa on U.S. 67, with the sun rising over the rolling hills.

We came to a substantial downhill and Anthony decided to turn around and head back to Marfa for his drive back to San Diego. Jamie and I pushed on toward Presidio. The ride was ultimately downhill, though with some pretty big climbs. They were just a warm-up for the next two days, but in my head I was griping the entire time. I really hate hills. The last twenty miles were much more enjoyable, as we coasted downhill and through the city of Presidio toward our destination, the Loma Paloma RV Park. It was insanely hot at the RV park, with very little shade, but luckily Javier came through once again with the sun shelter. We tucked in early so that we could get a predawn start the next day.

Javier told us that if we wanted to get an early start, we could just jump on our bikes and he would pack everything for us. Now that’s A+ support. We rose around 5:45 a.m. and got moving as soon as possible. This gave us more than an hour before sunrise. It felt like we were cheating, getting in stealthy miles. FM 170, or River Road, has been called one of the most scenic drives in the country, and maybe it was a shame to miss some of it while riding in the dark, but we had plenty of miles and daylight in front of us. River Road is also known for its epic climbs, some of which reach a 16 percent grade. We hit our first hills just as the sun was peeking over the mountains. These were just a prelude—the big ones came halfway through our ride. I’m happy to say we both made it up all the climbs, no walking needed. The pain of the climbs was numbed by the stunning sights of the mountains and the river below, not to mention the glory of the descents. Those were spectacular as well.

Around three quarters of the way through our ride, in Lajitas, we were taking a rest stop when I ran into Texas Monthly colleague Christian Wallace, who was on his way to his own adventure on the river with friends. It was surprising and refreshing to have a mini–Texas Monthly reunion in West Texas. A few hundred more climbs, and we made it to Terlingua. We were gifted a place to stay, yet again, by a cousin of Sofia and Javier’s. Jason and Daniela Daniel arranged the night for us in the bus at the El Dorado Hotel. The renovated tour bus was the perfect place for three weary road warriors to rest their heads. That night we dined at the Starlight Theatre Restaurant and Saloon, where we bumped into Christian again. West Texas is a small world.

Jamie and I cruised through Terlingua in the early morning, just before sunrise. We were greeted in Big Bend National Park with a strong headwind that kept changing to a crosswind. It’s hard to complain, being in Big Bend just as the sun rises. The beauty of the park is well-known and well earned. We decided to drop into a low gear and enjoy the views. This worked for the first thirty minutes, then I was back to complaining about the winds. Jamie kept us moving and we reached the Panther Junction Visitor Center in a couple hours. A few people had told me to ride up Chisos Basin Road. I’ve driven that road and I’m sure it would make for an amazing ride, but I had a schedule to stick to. Plus, this ride was already going to be 64 miles. Next time!

After we filled our bottles and posted photos on social media, Javier arrived with egg and potato tacos. I swore these were the best tacos I had ever eaten. Thirteen miles after Panther Junction, Jamie and Javier swapped places, so Javier could ride a few miles with me. A few turned into twenty-two. We rode together all the way out of the park and six miles to the east to Stillwell Store and RV Park, where we were camping for the night. We finished the day with snacks, beer, and Wi-Fi on the store’s porch.

We took our time breaking camp, since we only had to ride about forty miles and the winds looked to be in our favor. Jamie and I took off, leaving Javier to wrap things up and meet us in about twenty miles for a refuel. The ride north to Marathon was almost as pretty as the two previous days had been. The highlight for me was passing Santiago Peak. With an elevation of 6,524 feet, it looks like a massive dormant volcano ready to explode, similar to my son, Santiago. We were making good time when Javier caught up with us. After stopping to eat a few oranges, we noticed the wind picking up. It was a magnificent tailwind and it pushed us all the way to Marathon in record time.

We met Javier at Brick Vault Brewery & Barbecue, where we toasted to the end of our Big Bend excursion. Then we headed to the Marathon Motel & RV Park and said goodbye to Jamie. It was hard letting go of Jamie. Not only was he a great riding partner, but he was a good luck charm. From the point he showed up, I hadn’t had a single flat tire. I was afraid of what would happen after he departed. We freshened up, and Javier and I biked over to the French Company Grocer. I had met owner Sam Stavinoha, a friend of Christian Wallace, in Terlingua, and he told me to swing by when I was in town. We grabbed some beers and snacks and chilled in the new beer garden in the back of the store. Sam showed up a little later and we shared a few cold ones and few stories from the road.

This was to be my last official day with Javier acting as my support crew. He was off to see his parents in Brownsville, and then I would be solo again. It was a blessed day, with strong tailwinds and a route that was basically all downhill. I think I must have been coasting for half the day. I could easily get used to this. Ten miles outside of Sanderson, I saw a cyclist in the distance riding toward me with a touring setup. I slowed down as he was passing and asked where he was riding. He told me San Diego, but did not seem in the mood for chatting. He was headed up the hills I was flying down, so it was understandable. Soon after, another cyclist was pedaling up the hill. It was Javier. We rode for a few miles before arriving in Sanderson.

In Sanderson, at the Desert Air Motel, they were expecting me and had upgraded me to a suite. This was a nice surprise. Before arriving, I had read about the Ranch House, where the servers open-carry pistols on their hips. Being the two liberal snowflakes that we are, we had to go experience the freedom. We ordered a couple burgers to go. We learned the guns are real, the burgers are okay, and the fries are tasty. Sleep came fast with two giant burgers in our bellies.

The night before I called an audible and decided to ride all the way to Comstock instead of Langtry. In Langtry I would’ve had to wild-camp outside near the Judge Roy Bean Visitor Center. This is something cyclists apparently do, but it sounded a bit sketchy to me. I checked Google and the ride to Comstock was eighty miles, which would be my longest single ride of the tour. Javier said he would support me along the way to Langtry, then leave my stuff at the motel in Comstock. I woke up early and got about thirty miles down the road in the dark. Sixty miles into the ride, I met up with Javier for the last time. He let me eat his peanut butter and honey sandwich and we had a good hug. It’s hard to say how much Javier has helped me in the last two weeks. I can’t imagine how much harder it would have been to make my way through West Texas on my own.

Then I was riding solo, and by the time I crossed the spectacular Pecos River High Bridge I was almost eighty miles in. I was almost there, I thought. Around mile eighty-four I realized I may have made a mistake. I swore I saw eighty miles when checking distance last night, but maybe my tired eyes had deceived me. They had. It’s ninety miles from Sanderson to Comstock! Those last ten miles were the longest ten miles of the trip. In Comstock, after returning to the motel with my dinner, I met a retired cyclist, Joan, who had just returned from the hospital after a bout with dehydration. She was currently riding the Southern Tier Bicycle Route, from Florida to San Diego. We shared a little about our tours so far and I gave her a tip about staying at the Fort Hancock Community Church. After our discussion I found myself reminiscing about my journey up to this point. I couldn’t believe I only had nine days left.