When Esaul Ramos and Joe Melig opened 2M Smokehouse in San Antonio, in late 2016, they didn’t think it was necessary to label their style of barbecue as Tex-Mex. Ramos had spent a few years at Austin’s la Barbecue studying the Central Texas way of smoking meats before returning to his hometown. At 2M, he blended his newfound skill in the pits with the foods he’d grown up eating: tacos, barbacoa, pico de gallo, and nopales. He and Melig refer to what they do as “Barbecue con Ganas” (“Barbecue with Passion”). To them, it wasn’t Tex-Mex barbecue; it was just the San Antonio way. “I wasn’t trying to be different,” Ramos says, but his joint, along with several others, undoubtedly helped fuel the trend of Tex-Mex barbecue across the state.

When you enjoy a slice of juicy brisket wrapped inside a warm tortilla, you’re celebrating the marriage of our two most beloved cuisines. This is nothing new at South Texas barbecue joints, where a side dish of rice and beans is as common as coleslaw and you’ll even find the occasional fideo. But the current Tex-Mex wave is deepening the bond between the two cuisines in new ways. You’ll find a lot more than just barbecue tacos, in other words.

“I don’t see it as a fusion of cuisines,” explains Miguel Vidal, of Valentina’s Tex Mex BBQ, an Austin joint that many people credit with starting the Tex-Mex barbecue movement happening now. “I see it as a natural progression of what has been part of Mexican American culture in Texas.” Vidal is a San Antonio native who put the pairing right in the name of his outdoor joint, which he started with his wife, Modesty, five years ago; their tagline is “Hecho con Amor.” The couple, along with Vidal’s brother Elias, crank out some of the best flour tortillas in the state (Miguel says his mom’s are better), which cradle a variety of smoked meats for breakfast, lunch, and dinner. On Sundays, Valentina’s uses smoked beef cheeks for barbacoa, the drippings of which are the base for the brisket carne guisada.

Valentina’s brisket garners enormous praise, and it’s well deserved, but the menu’s unsung hero is a unique take on fajitas. Vidal smokes marinated skirt steak over mesquite wood, then slices and sears it to order in a cast-iron skillet with peppers and onions. Unlike traditional fajitas, the beef takes on a tender texture and smokiness that I daresay is an improvement, even without the sizzling platter.

The same attention to detail is found at Flores Barbecue. Michael Wyont opened Flores in a trailer in his hometown of San Marcos in 2016, but then moved it to Whitney that same year. The early menu didn’t reflect the Tex-Mex side of his upbringing, but that changed when Flores moved into a building in 2017, giving him room to try to replicate his grandmother’s flour tortillas. Instead of shortening or lard, he substituted brisket fat, which gives the tortillas their barbecue flavor. His smoker also seasons the serrano peppers and tomatoes that go into his salsa, and his version of carnitas (available only on Fridays) uses portions of salt-and-pepper-rubbed pork shoulder that are slowly tenderized with oak smoke. This is a blend of traditions that goes way beyond pulled-pork nachos, Wyont says: “Putting nacho cheese on some barbecue doesn’t make it Tex-Mex barbecue.”

With Tex-Mex Tuesdays or Tamale Thursdays, more and more barbecue joints across the state are embracing the combination of traditions. Ronnie Killen, who has Tex-Mex barbecue dishes on the dinner menu of Killen’s Barbecue, in Pearland, this fall is opening Killen’s TMX, dedicated to Tex-Mex cuisine. The most popular new item at one of Texas Monthly’s Top 10 joints, Tejas Chocolate Craftory, in Tomball, is the chile relleno sausage; the beef cheek is the de facto smoked beef option at LeRoy and Lewis, in Austin, which saves the brisket for the weekends. The Tex-Mex movement means barbecue fans are likely in for excellent tortillas, but many fear the beef cheek could go the way of the oxtail, a onetime trash cut whose newfound popularity priced it out of its usual market.

TRY THIS AT HOME

Tortillas can turn any barbecue leftovers into a Tex-Mex taco feast. Or add cheese to make quesadillas or enchiladas. Reheated smoked meat tastes so much better this way.

When you take a scoop of off-the-cob elotes (corn) that was smoked over mesquite or bite into a tender beef cheek layered with silky rendered fat, it might make you wonder what took so long to bring Tex-Mex and barbecue together at more places. I’m not sure—I’m just glad it’s happening. The rise of San Antonio pitmasters who aren’t afraid to showcase the city’s individuality rather than adhere to the dogma of Central Texas’s barbecue tradition is certainly one factor behind the trend. And it could also be that the market just needed something new. Traditional barbecue—smoked brisket, ribs, and sausage—can be found just about anywhere, but a tamale stuffed with brisket is something special.

For Ramos, this food is more than a trend. The menu at 2M is a reflection of his culinary life, as exemplified by the barbacoa he serves on the first Sunday of the month. He seasons beef cheeks with salt and black pepper and then puts them on the smoker. Once they get enough smoke, he then braises them after covering them in banana leaves, which flavor the meat but also replicate the function of the butcher paper that is ubiquitous as a brisket wrapper in Central Texas barbecue. “I try to make it as traditional as I can without putting it in the ground,” Ramos says. He would like to bring the same thoughtfulness to versions of the carne guisada, carnitas, and pork al pastor that he grew up eating, but he needs time to perfect those recipes.

When asked if he’d ever give up smoking briskets and ribs to make room for those other possibilities, he quickly shoots down the notion. “I love barbecue too damn much.” He just enjoys the freedom of adding serrano peppers and Oaxaca cheese to his smoked sausage instead of jalapeños and cheddar. He says, “I don’t want my life to just be salt and pepper.”

This article originally appeared in the December 2018 issue of Texas Monthly with the headline “Tex-Mex and Barbecue Are the Perfect Couple.” Subscribe today. 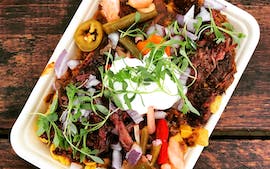