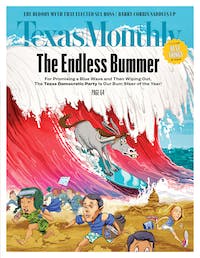 Q: I was on a business trip to San Antonio a year ago (my first time in Texas) and was treated to tamales (my first) at a restaurant there. They were so delightful that all this time later I think about them still. As Tex-Mex restaurants are scarce where I live, I have decided to make my own. I’ve located recipes online and have even found masa. Corn husks are another matter. Is there such a thing as commercial corn husk suppliers? Where do restaurants in Texas get their husks for tamales? I’m as curious to know as I am ravenous for tamales.

A: The Texanist is happy to hear that you had a good time on your maiden trip to Texas last year. The Texanist, though, as you might imagine, is not surprised. He is, admittedly, a bit of a homer, but really, what’s not to like? Unless, that is, you happen to be a person with a strong dislike for such things as extreme weather, mosquitoes, rattlesnakes, mountain lions, bears, and dense rush hour traffic—and beautiful country, pretty sunsets, and really nice folks.

Texas is, generally, just a heck of a place. And integral to that greatness is our world-famous fare, a fact you seem to have picked up on during your visit to San Antonio. Did you happen to have a big bowl of chili? It’s the official but oft-debated dish of Texas and is said to have its origins right there in the River City. How about barbecue? Did you have any barbecue? It’s barbecue, by the way, that is often touted by the chili challengers in the aforementioned debates. And what about tacos? The Texanist bets you had your fair share of tacos. How could you not? They’re the unofficial state dish of San Antonio. Hoo boy! The Texanist’s mouth is watering.

Before he gushes any further, the Texanist has to tell you that among the many favorite foodstuffs with which he regularly stuffs himself, tamales rank somewhere near the very top of the heap—and as is frequently pointed out to the Texanist by concerned friends and family, it’s quite a heap. There are very few things in life as gratifying as bellying up to a dining table that is adorned with a heaping pile of those ever-palatable little packets of steamy pleasure, unwrapping a dozen or so, and gobbling them all down. And whether the tamales are consumed at a dining table, a pickup truck tailgate, or a bus stop bench matters not; they always provide the exact same surplus of satisfaction. It’s guaranteed, like the appearance of shamrocks on St. Patrick’s Day. The classic grease-slickened spicy pork variety is probably the Texanist’s favorite, but when it comes to tamales he’s not picky. Pork? Beef? Chicken? Bean and cheese? “Yes, por favor,” replies the Texanist in broken Spanish. The Texanist’s editor, a man who worries about his cholesterol levels, is partial to the nopales and onion tamales he picks up on Sundays at his local farmers’ market.

Without doing a deep historical dive into the origins of this delightful delectable, the Texanist should at least inform you that tamales are an ancient food that hails not from Texas proper but from the great cultures of Mesoamerica. The Aztecs, Mayas, Mixtecs, Olmecs, Toltecs, and Zapotecs all partook in tamales and, thankfully, passed the tasty custom down through the generations. Interestingly, depending on where in the Latin world you find yourself, banana leaves may be used instead of corn husks. But in Texas it’s corn husks all the way.

So where exactly does a would-be tamalero (tamale maker) procure the husks? It’s a fair question—for a foreigner. Well, as a matter of fact, there are indeed commercial corn shuck suppliers, who make the purchase of husks quite simple, at least for those of us fortunate enough to live in Texas. To better understand this unique sector of the culinary industry, the Texanist reached out to Roberto Sanchez Jr., the president of Sanchez Distributors, based in San Antonio. Sanchez claims to be the king of corn husks in the U.S. and told the Texanist that his company sells nearly half a billion (billion with a b) husks every year. Millions of dollars’ worth of corn husks. The company provides husks to H-E-B and Kroger and numerous other food suppliers and institutions, and doesn’t sell anything but husks, which it procures from Mexico, using a modified seed that produces a small-eared corn wrapped in an oversized husk. After shucking the husks, the company donates the corn itself back to the farmers.

Sanchez’s biggest market? Texas. The Texanist thought that California would have been a contender for the title, but Sanchez explained that because the Golden State’s tamales are typically much larger (4–5 ounces) than Texas tamales (about 1.5 ounces), fewer husks are needed on the West Coast. So where a Texan might eat, say, a dozen small tamales, requiring a dozen husks, your typical Californian would likely have their fill with two or three, encased in just two or three husks.

Though the Texanist hopes you will find all of this information about the corn husk business interesting and edifying, he also realizes that what you really want to know is how you can get some corn husks into your own kitchen, which is located far, far away from San Antonio.

Because the Texanist is a full-service advice supplier, he reached all the way out across the pond to Tesco, one of your grocery chains there in British Isles, to see if, by chance, it stocked corn husks. It turns out it does not, as the Texanist suspects you may have already ascertained on your own. The Texanist then wondered if you could try a smaller grocer, preferably one with an international aisle, or, perhaps, an entire international grocery store, of which Belfast seems to have a few, though none of them appear to be Mexican in orientation. Or you could hit the information superhighway, where the Texanist found a number of options that cater to the United Kingdom—including Amazon.co.uk and such specialty purveyors as www.mexgrocer.co.uk and https://vivamexico.ie/. The best option, though, might just be the DIY route. You could shuck your own corn and dry out those husks yourself; it’s not that tough, and instructions can easily be found online. In doing so, you would likely be creating the most authentic tamales in all of Northern Ireland.

Whichever way you go, once you do procure yourself some corn husks, the Texanist suggests that you not consume your sure-to-be-delicious tamales in isolation. In fact, he suggests that, once the coronavirus pandemic has passed, you go all out and throw a full-blown tamalada, a festive gathering for the purpose of mass tamale construction (and consumption) that is common in Texas around this time of year—tamales, while not necessarily seasonal, are very popular during the holiday season. If your fellow Belfasters are as unschooled in the pleasures of the tamale as you once were, they will undoubtedly feel eternal gratitude toward you once they have partaken of the corn shuck–swaddled masa.

Adh mor ort! (That’s Gaelic for “good luck,” though, unlike the Texanist, you probably knew that without having to look it up.) And be sure to let the Texanist know how it turns out.