Could there be a better time for chicken and dumplings? The very word “dumpling” brings to mind coziness and sustenance and gentle pats on heads that are at this moment likely addled by seasonal ailments, holiday drama, and the bewildering business of democracy. There’s a chill in the air, and I for one am feeling a powerful urge to take refuge in the kinds of foods we don’t eat much of anymore, the fattening, nostalgic stuff of corner diners and buffet tables and grandmothers’ kitchens.

It would seem hard to argue about the simple comfort of this dish, yet it should come as no surprise that folks do like to draw a line in the flour in regards to their preferred dumpling (not to mention what goes with it, as I was reminded while listening to my dad reminisce about his grandmother’s dumplings made with freshly harvested squirrel meat: “It could be a little chewy”). Some prefer the “drop biscuit” kind, the sodden nubbin of dough floating atop the stew in potpie style. I myself am partial to the so-called slick dumpling, described by Kentucky food writer Cissy Gregg as “a thin strip of dumpling that nestles down in the gravy in loving companionship with the pieces of chicken.” That’s what my grandmothers made, and right now I’m inclined to go with the dough I know. 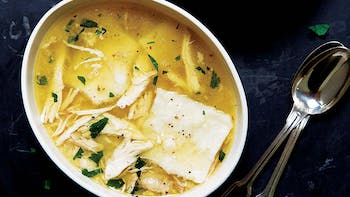