Eric Silverstein, founder of the Peached Tortilla, draws on many influences for his cooking. Born in Tokyo to a Chinese American mother and a Jewish American father, he traveled throughout Asia as a kid, moved to Atlanta in his teenage years, and, of course, lives in Texas now. The eclectic menu at his Austin restaurants reflects all of this, with creative use of Asian ingredients in Southern dishes and vice versa. Think Texas barbecue fried rice and banh mi tacos.

Last May, Silverstein published his first cookbook, The Peached Tortilla: Modern Asian Comfort Food From Tokyo to Texas (Sterling Epicure), a cheerful and sunny volume that tells how he came to open a food truck and later multiple restaurants. The recipes come from the restaurant’s menu, although some allow slight modifications; for example, instead of making you deep-fry brussels sprouts like he would at the restaurant, Silverstein gives you the option to roast them. And many of the recipes could be filed under simple, good ideas: adding nori (the dried seaweed used in sushi) to mashed cauliflower is super easy, but it takes the dish to another level.

The best thing about this cookbook, though, is that the recipes are fun. Remember fun? Perhaps you could remind yourself with some pad thai tacos, banana Nutella spring rolls, or a wasabi Bloody Mary. For a real mood boost, though, try the Kimchi Queso. Writes Silverstein: “Chips and queso shape and define the food scene in Austin. They are right up there with barbecue, which is saying a lot, considering that Texas is the BBQ capital of the world. Tex-Mex joints have proliferated in the Austin restaurant scene, and each has its own play on chips and queso. Here’s our riff.” 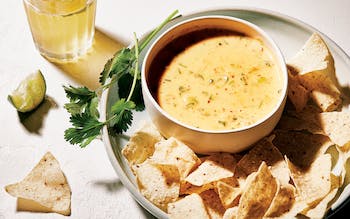