“If Donald Trump still wins, I will go into the history books as an asterisk. And people can use other A-words to describe me.”

—Texas elector Chris Suprun to the Dallas Morning News. Suprun announced his intention not to vote for President-elect Donald Trump on Monday, and he’s since been called a lot of nasty things by people online, the ‘A-word’ almost definitely included (also on the list, according to the Morning News: “traitor,” “idiot,” “coward,” “a disgrace to Texas,” “another corrupt establishment dirt bag,” and “attention whore”). He’s even received death threats. 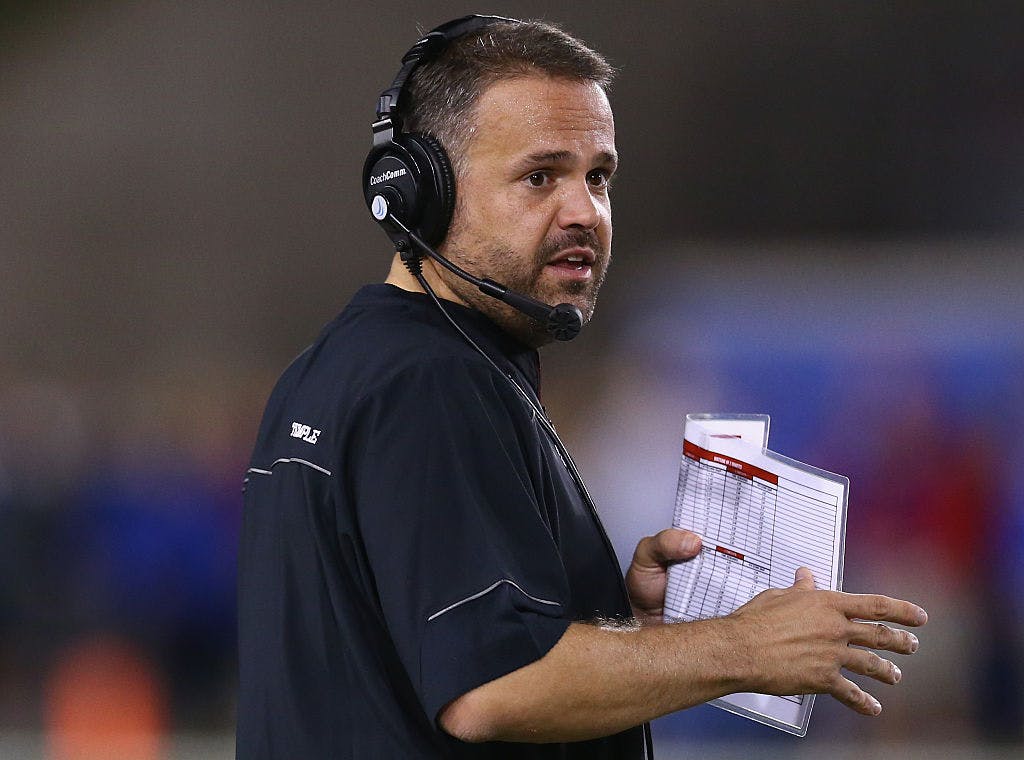 Cleanup Duty
Baylor University hired Matt Rhule to be its head football coach on Tuesday, according to ESPN. Rhule, who was head coach at Temple University for the past four seasons, has his work cut out for him at Baylor both on and off the field. He steps in to lead a program that’s been at the center of a massive sexual assault scandal, which eventually claimed the jobs of the university’s president, athletic director, and former football coach Art Briles after an independent report released in May found fundamental failures in the way Baylor handled allegations of sexual violence, particularly those made against football players. Rhule’s most important challenge is permanently changing a culture that allowed such failures to happen. Secondary to that is what he does on the field, though that also won’t be easy. Rhule has an interesting resume—his only head coaching experience came from Temple, but he led the historical doormat to its first back-to-back ten-win seasons in program history. Baylor, of course, is in tatters. After starting the season with six straight wins under interim head coach Jim Grobe, the Bears lost their final six games of the season, including embarassing blowout losses at home against TCU, Texas Tech, and Kansas State, and the team has only one verbal commit in the 2017 recruiting class. Rhule, 41, was apparently a pretty hot commodity. According to the Waco Tribune-Herald, he turned down the head coaching gig at the University of Oregon and chose Baylor instead. Baylor signed Rhule to a seven-year contract, so they clearly see him as the right guy.

It’s A New D.A.
Governor Greg Abbott appointed Faith Johnson to the Dallas County district attorney position that was vacated by Susan Hawk in September, according to the Dallas Morning News. Like Hawk, Johnson is also a Republican, and she’ll have a chance to prove herself to voters during the rest of Hawk’s term, which runs out in 2018. But Johnson definitely has some work to do if she—and the GOP—wants to keep control of the DA job in a county that usually votes for Democrats. Johnson is a former district judge and prosecutor and went into private practice about ten years ago, and she’ll be the first-ever black woman to hold the DA post in Dallas County. “Faith has shown a commitment to law enforcement and the rule of law,” Abbott said in a statement. “She has devoted herself to defending some of our most vulnerable Texans, and I am confident that in her new role as district attorney, Faith will continue to fight for the people of Dallas County and ensure that justice is served.” Hawk resigned to focus on her mental health after a rocky tenure during which she required three long absences to receive treatment for depression.

Jesus Piece
‘Tis the season for one of Texas’s favorite holiday traditions: skirmishes over religious symbols in public places. The latest outbreak is in the small West Texas town of Spur, where a ten-foot tall cross sits mounted in a concrete slab atop a hill in Swenson Park, overlooking the town. According to the Lubbock Avalanche-Journal, the cross is unceremoniously surrounded by cacti and overgrown vegetation, so it looks like “more of a hometown landmark than a tourist attraction.” Still, someone wasn’t happy about the religiosity it brought to the city-owned park, and complained about it to the Freedom From Religion Foundation, a Wisconsin-based nonprofit that has been a real thorn in the side for Texas’s Jesus-worshipping folk for quite some time now. In a letter to Spur’s leaders, the foundation claimed the cross is “a blatant violation” of the Constitution. The city of Spur has yet to respond. Spur resident Leanora Houwen told the Avalanche-Journal that the vast majority of the town loves the cross and suggested an outsider was responsible for filing the complaint. “I don’t know why people come in, move into a town and start complaining about the town,” Houwen said. “I know we’re getting an influx of tiny house people, and maybe one of them don’t like it.”

Rat Attack
Man, Wichita Falls is just constantly under siege. First it was gnomes. Then it was pigeons. The nationwide clown invasion in October certainly didn’t bypass Wichita Falls either. Now, however, it’s apparently the “year of the rat,” according to the Wichita Falls Times Record News. The newspaper cites rainy weather and booming crops for the arrival of Wichita Falls’ rodent overlords, who have wreaked havoc on the city by spreading disease, attracting rattlesnakes, and, uh, eating cars? According to the Record News, the rats actually gnawed through the internal wiring of a sheriff’s office vehicle, causing $2,200 in damage. Among the other odd things the wave of rats has consumed in Wichita Falls: farming equipment, all of the rat poison pellets stored in a thick plastic container, a bar of soap, and one small child. Just kidding, no kids in Wichita Falls have been consumed by rats. . .yet. But according to the Record News, cold weather will likely force rats indoors. Hide your cars, hide your kids, and hide your soap, Wichita Falls. THE RATS ARE COMING.

Inside a fentanyl trafficking ring in Lubbock STAT News