In Texas, the summer heat seems to come on all at once. One day it’s warm-but-bearable and the next you’re melting like a softened popsicle the moment you step outside. Now that the days of instant wilt are upon us, it’s prudent to keep handy a list of places that hold water (both literally and figuratively) and thus provide the antidote to what I’ve taken to calling summer’s air-conditioned ennui.

To celebrate our June 2016 cover story, in which Dan Oko singles out nineteen places where you can cool off as nature intended (see below), I’ve gone back through the Texas Monthly archives to pluck out some of our previous compendiums of restorative and/or action-packed waterways. Since the pursuit of liquid relief is a well we draw on regularly, our waterlogged reporters have amassed quite a catalog of prime swimming holes, lakes, rivers, spring-fed pools, paddling trails, water parks, beaches, bays, bayous, creeks, and reservoirs. (The running joke is that we’ll resort to publishing “Texas’s Best Puddles” one day.) So, as summer begins in earnest, keep this page bookmarked and your sunscreen handy. Wherever you are, a cool respite is just around the corner.

(To hear more about our June 2016 cover story, listen to the latest Daytripper podcast, in which writer/float-tripper extraordinaire Courtney Bond and I discuss secret swimming holes, epic river trips, and more with Daytripper host Chet Garner and producer Todd White.)

“Get Thee To Water” – Along with nineteen “curative spots to baptize oneself in,” we make note of a few waterfalls and honey holes to visit, a river that runs through one family’s history, a Texas surfer’s proving grounds, a secret West Texas stock tank, and “the world’s best waterpark” (you know which one!).

“Though today the shady waterfronts are in need of a little TLC, the creek still runs clear and cold. A cluster of access points includes Horseshoe Park and the mini-falls downstream at Lions Park. Diving in, I spotted clusters of armored catfish eating algae among the rocks and recognized kindred spirits: water-loving critters grateful for this brisk oasis.” – Dan Oko

“15 Best Spots on the Coast” – So some are less secret than others, but each of these gems is among the wildest and most secluded places along the 350-mile Texas coast.

A sandy eight-mile beach on a narrow spit of arid land between the Rio Grande delta and the salt flats of the lower Laguna Madre, Boca Chica is the alpha and omega of Texas—the place where a once mighty river spills into the mightier Gulf, where the U.S. ends and Mexico begins, and where the high-rises of South Padre Island give way to an untamed, undeveloped coast. – Dan Oko

“Springs Eternal” – A list of 25 freshwater oases in which to cannonball, belly flop, or do the can opener.

The combination of a beautiful setting, beautiful people, and cold, refreshing water makes Barton Springs the best swimming hole in the state. Recipe for a perfect afternoon: Combine towel and sunscreen, add people-watching and shade to taste, and bake until ready for refrigeration. Repeat until sunset. For best results, add your honey. If you’re hungry: burgers and shakes at P. Terry’s. – Charlie Llewellin

“Water, Water Everywhere” – Michigan may be the Great Lakes State but we can boast about having more “considerable inland bodies of standing water,” as lakes are so defined, and these 20 are among our best.

e.g., Lake Texoma // near Denison // best for: strapping on a pair of skis

With 89,000 acres of water, even on crowded days there’s room to roam. And for my daughter, who recently took her first boat ride, there’s always the allure of zipping past Treasure Island or dropping anchor and exploring the sandy beaches. Don’t let the lack of a boat slow you down. The Eisenhower Yacht Club, in Eisenhower State Park, rents ski boats for the morning or afternoon….” – Brian D. Sweany

“Go With the Flow” – Whether you’re looking for Class III rapids or a lazy stretch to float along, you’ll find it (and then some) among these 20 Texas river trips.

e.g., Pecos River // from Pandale to near Comstock // best for: knocking out one of the last real adventures you can have in the state

The Pecos is a classic spring-fed pool-and-drop river, which means that calmer, wider sections alternate with short, fierce rapids hidden in thick canebrakes. The guidebook is only useful if you’re paying close attention, since it quickly becomes hard to tell one rocky bend from another. But one of the great joys of this trip is not knowing where you are and how much longer you have to go. Instead of worrying about the where and when, feast your eyes on the cliffs that my companion called a rock symphony, float through vast boulder gardens, and spend the evenings counting endless stars. – Charlie Llewellin

“Shore ’Nuff” – Surfing, shelling, and sand-castle architecture are just a few of the endeavors you can throw yourself into at these 20 choice beaches.

Thanks to a recovery program for endangered Kemp’s ridley turtles that began in 1978, dozens of females now lumber ashore from April through mid-July (a record 102 last year). Rangers collect the eggs and protect them until they hatch. Then, at impromptu times in the summer—you can’t tell a turtle egg what to do and when to do it—spectators gather to watch the release of the silver-dollar-size hatchlings and cheer as they toddle out to sea. – Suzy Banks 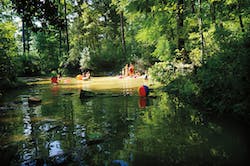