All across Texas, more cyclists are turning to the more laid-back category of “gravel grinding,” which gets them off of paved streets—and away from a lot of fast-moving cars—and onto more serene rural routes. Texas has become a popular state for gravel grinding over the past few years. The Hill Country and the Red River Valley are especially scenic and offer many gravel routes, but gravel riding can be done almost anywhere in the state. Here are five good options in different regions. 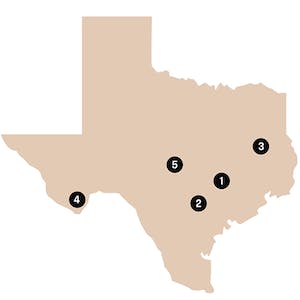 For a mostly gravel, 35-mile spin through pine groves and rolling farmland northeast of Bastrop State Park, ride Gotier Trace and Antioch roads toward Paige. Stop at Antioch Cemetery, where some of the county’s earliest pioneers are buried.

Begin your relatively flat, 38-mile cruise at Palmetto State Park, crossing the San Marcos River via the Slayden Bridge. Wind your way to Harwood parallel to Interstate 10 before turning back on County Road 230, toward the hot springs in Ottine and the park.

In East Texas, the undulating El Camino 105 route (so named for its 105 miles, although it’s actually 107) through Grapeland, Latexo, and Mission Tejas State Park intersects an old Spanish and Indigenous trade route established in the late seventeenth century.

At Big Bend National Park, bike Old Maverick Road from the Maverick Junction entrance station, on the park’s west side, to Santa Elena Canyon, about 14 miles each way. The improved dirt road cuts through the Terlingua Creek badlands and passes the rock ruins of an old structure as it gradually descends to the Rio Grande.

Brave the sands of Keyserville Road as it rolls for 9 miles south of the tiny Hill Country town, where the Castell General Store serves up a fine smoked chicken.

This article originally appeared in the October 2020 issue of Texas Monthly with the headline “Five Great Routes.” Subscribe today.

Texas Cyclists Are Discovering the Joys of Gravel Grinding

Tour de Texas: Why I’m Cycling the 3,000-Mile Perimeter of the State

Getting Away From It All, on Wheels: Texans Take to Camper Vans and RVs