When I look back at this week, two things stand out: the Northeast Texas Trail (NETT) and beer. I remember reading about the NETT in Texas Monthly a couple years ago and really wanting to ride the trail, but I couldn’t envision a time when that would happen. Well, I certainly figured that out, didn’t I? From the start of this trip, I was hoping I’d get to hit as many breweries as possible along the way. That didn’t happen until this week, when I was able to visit three. Not only that, I was also lucky enough to hook up with friends I’ve met within the Texas beer community. Their hospitality and support were essential this week and kept me going into week four. 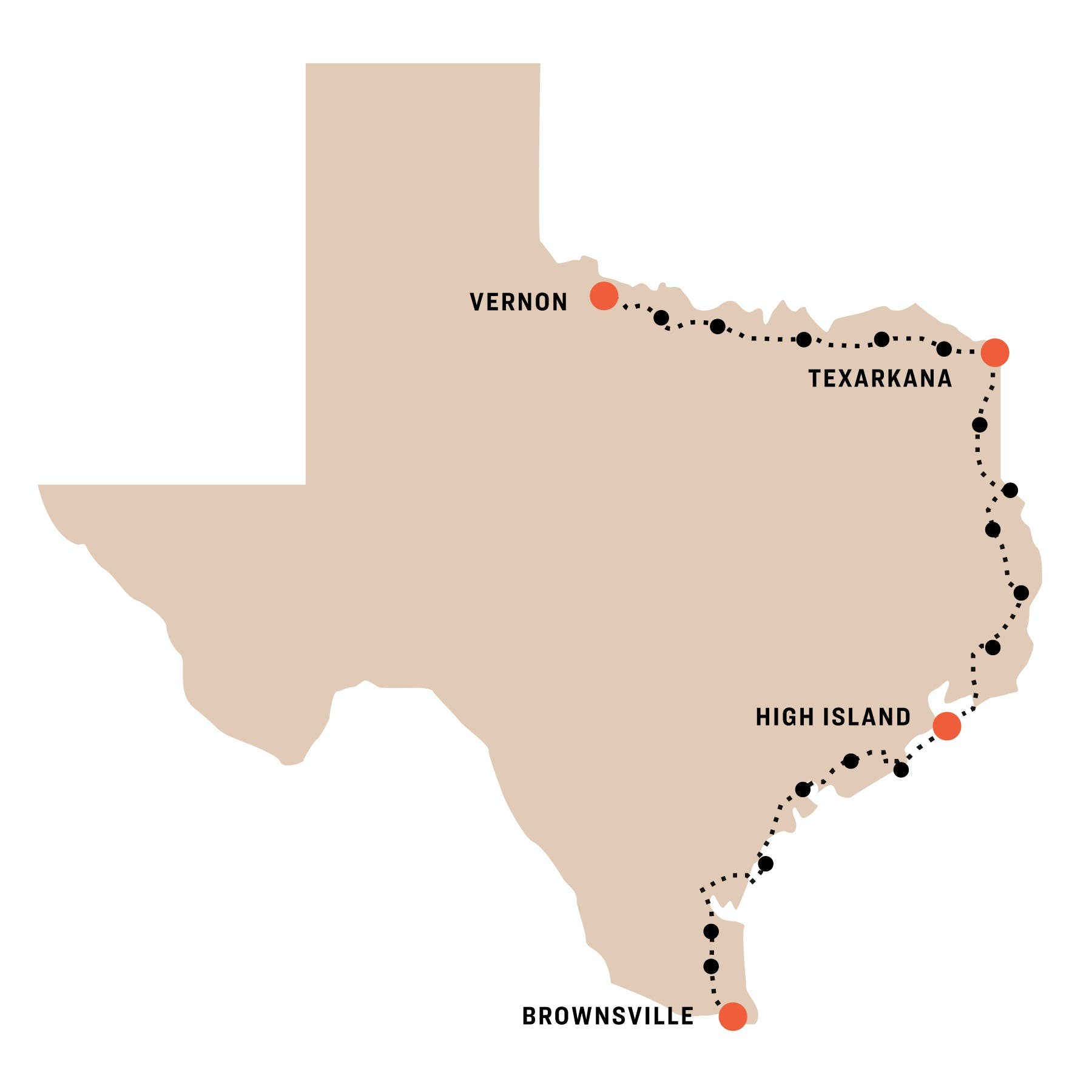 I took another rest day after my big ride from Marshall to Texarkana. Spent the day a lot like my last day off: Netflix and chill (like for real, chill). I also did some planning for the coming week, including researching ridable sections of the Northeast Texas Trail.

When I left Texarkana, I was not expecting the day to be one of my best days of riding up to that point. Getting out of Texarkana wasn’t fun, riding along the frontage road of busy Interstate 30. Once I got over to U.S. 82, things got a little better, but the shoulder was hit or miss, with a good amount of traffic speeding by me. In New Boston, that all changed. That’s where I jumped on the beginning of the NETT. The section I rode was only 3.5 miles, but it felt so good being nestled in a canopy of trees and away from traffic after two weeks on the road. Much of the trail, which runs from Farmersville to New Boston, is unfinished and still pretty wild, with greenery encroaching and making the path unpassable. I planned on riding all the sections that are finished that intersected with my general route. In De Kalb, I took a long break for lunch. I grabbed a BLT and huge sweet tea from Bronc Stomper Cafe, which I found after spotting a sign on the side of U.S. 82. In Avery, right off the trail, the volunteer fire department has a hostel for cyclists and hikers. I learned about the hostel after rereading Texas Monthly’s piece about the NETT and digging through the trail’s Facebook group. After a few messages with Avery volunteer fire department chief and trail enthusiast Gary Tucek the night before, I had the hostel reserved for the night. Gary met me at the hostel to make sure I arrived smoothly. We sat out front and talked about Avery and the trail, which will be the longest in the state when it’s completed.

The hostel is an amazing place to rest for a night. The organizers have thought of everything: air-conditioning, a shower, a sink big enough to wash clothing, a mini-fridge, and more. I can’t say enough good things about the efforts of the fire department and the Northeast Texas Trail Coalition, the nonprofit that supports the trail. Its work has made Avery one of the top destinations in Texas for cyclists.

I slept like a rock at the hostel and woke up amped to hit the trail. I struck out on a side road and soon found myself on a gravel country lane. I had a hunch this road would take me the right way but had a few misgivings. But I pushed on and after four miles, I was back on the tarmac headed for U.S. 82. From there, it was a quick ride to Clarksville. I stopped for breakfast at the only place open other than McDonalds—a gas station, of course. There, I checked my route and saw that Google was suggesting I hop on the NETT. Unfortunately, this section of trail was too overgrown to ride on. Gary, back in Avery, had told me that in Bagwell I could ride a gravel section of the trail all the way to Detroit. I took the detour north to Bagwell and it started raining. This was getting really frustrating. I could be back on 82 and making better time, but I was headed for a trail that might be muddy and basically unrideable. But when I reached the trail in Bagwell, it was in great condition; the rain hadn’t made much of a difference on the packed gravel path. I rode that trail for about ten miles through Detroit with a big, stupid grin on my face.

In Blossom, I found myself back on the trail, which was paved all the way into Paris. I cruised into town pumping my “bike songs” playlist and taking way too many photos and videos of the trail. Once the NETT is finished, I definitely plan on coming back someday to ride it all.

The pines of East Texas were behind me, but the hills would continue, at least for a little while. Instead of trudging along U.S. 82 for the day, I took Texas Highway 56 starting in Honey Grove. About a mile out of Savoy, I was passing a building under construction when one the workers yelled something I didn’t hear. “Going to Sherman,” I yelled back, thinking he was asking where I was headed. “No, do a wheelie!” he shot back. In my head I told him to screw off, but meekly responded, “Too heavy,” pointing at my bike. It was a good excuse and I was happy I didn’t have to show off my wheelie skills, which are nonexistent.

Once I got to Sherman, I checked into my hotel and met up with photographer, musician, and living legend of the Texas beer scene Tony Drewry. On this trip I’ve passed near a few breweries, but they’ve never been open when I was nearby. Luckily Sherman’s own 903 Brewers was open and serving beer and food, so of course we made our way down for a few pints and burgers. The patio was pretty busy. It was bingo night, but we were still able to find a socially distanced spot. It was great to see a friend on the road. My time with Tony was like drinking a cold Fanta on a sizzling day, just before bonking (that’s cycling lingo for hitting the wall).

In the morning Tony drove ahead of me on U.S. 82 to snap some photos of me as I passed. I tried to look as pro as possible as I rode by him, honing my inner Lachlan Morton, but knowing I was presenting more of a Pee-wee Herman vibe. Then he was on his way back to Fort Worth and I was back on my own. In Muenster, I stopped for lunch at Doc’s Bar & Grill. They have a spacious outdoor biergarten, where I chowed down on a reuben and broke my two-beer rule. It happens. Back on the road I still had a bit over twenty miles to go and a number of hills to climb. I felt pretty sluggish, but distracted myself by yelling greetings to the horses, cows, and sheep I passed. After checking into my motel in Nocona, I walked to Nocona Beer & Brewery to sample their brews. The brewery is housed in an old boot factory, a hundred-year-old building with spectacular architecture. I wish the beer were as good as the building, but you can’t have everything.

When I popped out in the morning for my ride, I was hit with the unfamiliar feeling of cold air. As my wife’s family would say, it was fresh.

The first twenty miles or so I had a nagging headache from too many Nocona beers the night before. I wasn’t particularly looking forward to finishing the day at another brewery. On the other hand, I was excited for what was sure to be an unusual experience: sleeping at the brewery. Even with the headache, the ride went fast, averaging over 15 miles per hour. I made quick time passing horse ranches along U.S. highways 82 and 287, zipping through Henrietta and Jolly over mellow hills.

In Wichita Falls, I took my time sightseeing around downtown, pretending to shop for cool historic buildings, which are abundant. I made my way over to the “world’s littlest skyscraper,” a narrow forty-foot tower constructed in 1919. An out-of-town scammer reportedly tricked Wichita Falls residents into investing in the project by listing the building’s dimensions in inches instead of feet.

After lunch I met Matt Bitsche and his son Porter at Wichita Falls Brewing. I knew Matt from his time at Infamous Brewing Company in Austin. He later moved back to his hometown to open Wichita Falls Brewing in 2017. Russ Reynolds, Matt’s business partner, joined us soon afterward and we chatted about the beer business and Wichita Falls in general. It was great catching up with Matt and drinking his solid beers, especially the IPAs. Before leaving, Matt gave me his key and wished me luck on my journey. This was the closest I will ever come to owning a brewery. From there on it was just me and JT Ford, a bartender, microbiologist, and yoga studio owner. Once JT headed home, I made my way upstairs to the loft area to “camp out” for the night. It would have been fun to stay up late drinking from the taps and blasting some tunes, but I had a date with U.S. 287 in the morning.

Before leaving downtown Wichita Falls, I enjoyed something I’ve been neglecting this entire trip: a leisurely breakfast. The day’s ride was only around fifty miles, so I knew I had time to sit down and sip on a hot cup of coffee. One block from Wichita Falls Brewing sits the Duck Coffee Company, which was open by 7 a.m. I grabbed a black drip coffee and a chocolate chip muffin and sat out on their patio.

After that small luxury, I jumped on U.S. 287, which would take me all the way to Vernon. About thirty miles outside Wichita Falls, hundreds of massive wind turbines appeared on the horizon. I felt like Don Quixote, riding my steed from town to town battling windmills, or, more accurately, taking photos of them with my iPhone. I have never been one to name my bikes, as cyclists often do, but on this day, I decided to call my bicycle Rocinante, at least for the rest of the trip. I pulled into Vernon just before noon. It isn’t often that I get to my daily destination in time for lunch, but it left me with plenty of time to continue planning my quixotic journey into the Panhandle and the rest of the way around Texas.