This was my final week in the Panhandle, traveling from near the top of the region’s western side all the way to its bottom, near Kermit. I got to spend a day off with my family, which was not long enough, and I welcomed a new member to my team, my brother-in-law Javier. I was also lucky to get in a ride with an old friend and two new ones. All in all, it was a solid week of riding. 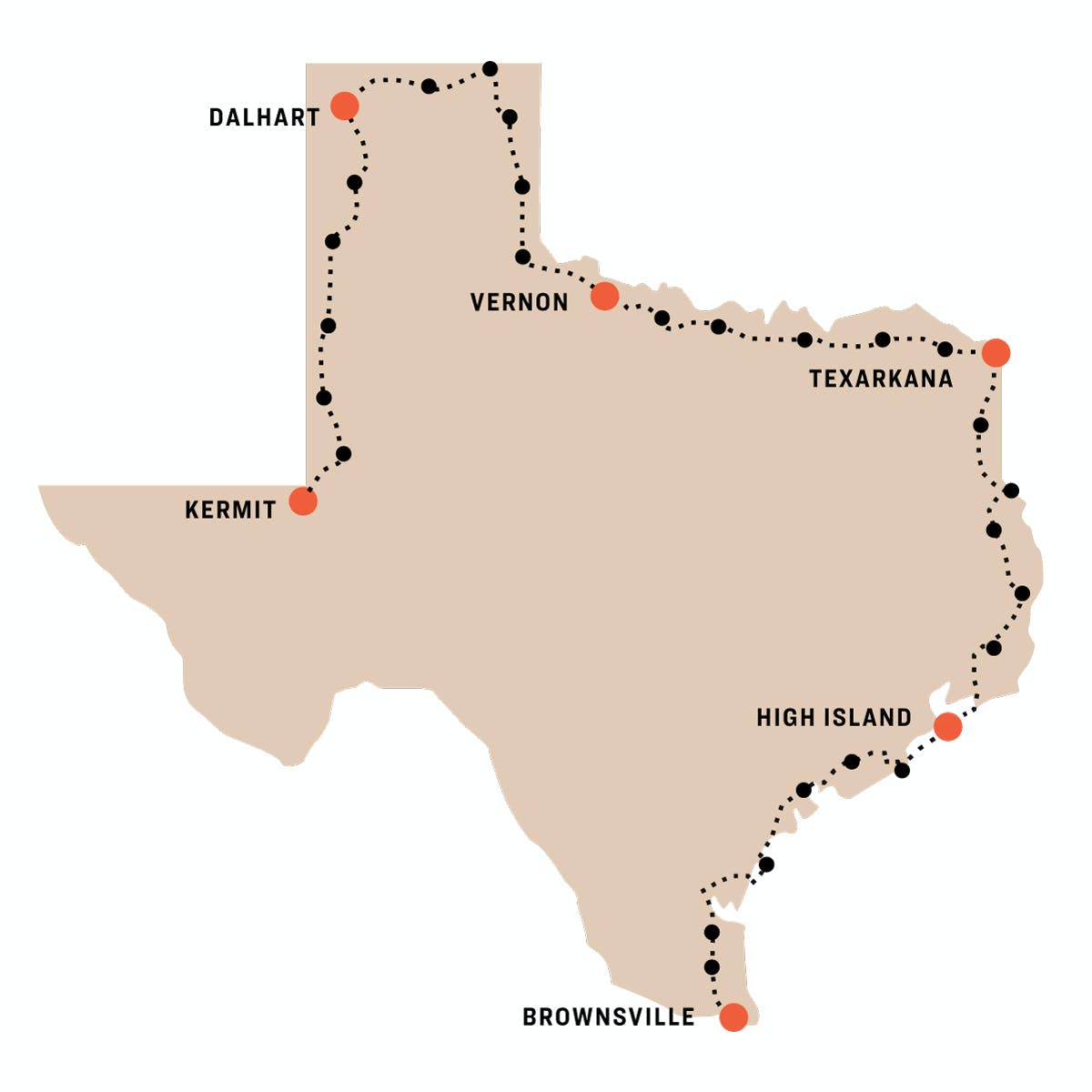 When I left Dalhart in the morning, the temperature was a brisk 40 degrees. In four days, my family would meet me in Denver City and deliver some warm clothing. Until then, I had only a flannel, a light rain jacket, and a beanie. So the start of my ride was a chilly one, but I warmed up quick enough. The thirty-mile ride from Dalhart to Channing was boring and uneventful. As I was resting at a repair shop, which I thought was closed, a guy came out to ask where I was riding to. When I told him Vega, he said, “It’s gonna suck.” I was prepared for a hilly ride, but this was still annoying to hear. I spoke to him for a few minutes and within that time he told me that the route was going to suck no less than four times. Not helpful. I cut the conversation off as quickly as I could and jumped back on my bike.

Thankfully, he was wrong. The road was mostly downhill all the way to the Canadian River, near the unincorporated community of Boys Ranch, making my ride very enjoyable and fast. Then it was time to start twenty-five miles of climbing. Most of the hills were mellow enough, with a few tough ones along the the way. The views of rocky bluffs and valleys kept me busy and distracted. It didn’t suck. Before I knew it, I was climbing the last hill into Vega. My hotel, of course, had two of three components of the Panhandle Trinity close at hand (Dairy Queen, Dollar General, and an Allsup’s convenience store)—Allsup’s for a late lunch and Dairy Queen for dinner.

This would turn out to be one of the smelliest days of my trip. Luckily, it was on the shorter side, at a little more than fifty miles. First I rode a quick thirty miles to Hereford, passing farms with fields of cows or wind turbines. I also passed by a few feedlots, where the air turned stinky, and there I made an observation. Throughout the entire ride up to this point, I’d ridden by countless free-range grazing cows. They’d always either stand still like statues or run away from me. But, oddly enough, the cows I passed in feedlots ran toward me. In my mind I imagined they were looking for help escaping their enclosures, but this was probably just anthropomorphizing on my part.

Beyond Hereford, my route took me past a number of beef processing plants and more feedlots. Even with a slight breeze, the stench was overwhelming for a city slicker like myself. I later learned that the odor comes from what locals call “shust”—cow excrement and dust from industrial feedlots—and that breathing it long-term can cause health problems. I did my best to breathe through my mouth all the way to Friona.

At home, I pretty much stick to a plant-based diet, but out here on the road, I eat what is available and close at hand. That often means fast food. So I was happy to find a local Thai joint, Thai Sky, across the street from my hotel. I ate well, chowing down on tofu and veggie stir fry. It felt good.

It was thirty miles to the town of Muleshoe, with nothing in between Friona and there, so I made sure to load up on water and snacks before leaving for the day. In Muleshoe, I had to take a long break to finish some day-job work. I got a Big Mac and sat outside McDonald’s to mooch off of their Wi-Fi. McDonald’s Wi-Fi is a reliable amenity on the road.

Once the work was done, it was time to have some fun, by which I mean riding into a headwind. The headwind lasted all the way to Muleshoe National Wildlife Refuge, twenty miles away. Outside the refuge, I picked up a dropped antler I spotted next to the road. It’s my only keepsake from the trip so far (I don’t have a lot of room on the bike for much else). Inside the refuge, the land was desolate yet beautiful. I was hoping to spot some actual wildlife, but the only animals I saw were some fire ants when I was taking a refueling brake. The rest of the ride was flat and hotter than it had been in a few days. It had me looking for shade on a stretch of road that was severely lacking in trees. I was very happy when I arrived at an RV park in Morton, where I’d be camping, and was greeted by a horde of puppies. I wish every ride ended with puppies.

What a day. I made plans to meet Shawn Phillips, a friend and co-owner of Good Line Beer Company, at Allsup’s at 7 a.m., along with two of his friends from Lubbock. They were going to ride with me for the first fifteen or so miles. When I got to Allsup’s, they were not there, but that was fine, because I had to change my back tube. The process takes a while, since I have to basically unload the entire bike to flip it over and take off my wheel. Finally, when my bike was good to go, they still had not arrived. I called Shawn and he said they were waiting at Allsup’s. It turns out that Morton, a little town of 1,800 people, has two Allsup’s. Once we figured that out, we joined up and I met his friends: Jerod Foster, a photographer, professor at Texas Tech, and avid cyclist, and Bryan Giemza, also a professor at Texas Tech. Jerod and I realized that we already followed each other on Instagram. After our introductions, we were on the road. It was a nice, mostly flat ride to Denver City. The first hour was easy and we took it at a pace that allowed for conversation. Then the headwind started to pick up. It wasn’t too bad, yet, but I knew it was going to get nasty later. Around fifteen miles in, we took a break to shoot a few photos and say our goodbyes. The other guys turned off down a gravel road to make their way back to their cars, and I continued south. Fast-forward half an hour and I was fighting 15–20 miles per hour headwinds. I was going slow—very slow. From Morton, it’s forty miles until the next town of Plains and I was barely halfway there. I made the best of it, taking it slow and making sure to enjoy the scenery, which there was not much of.

I finally made it to Plains and looked at my average miles per hour, 9.5—yikes. I took an extended rest stop in the shade and sucked down two coffees and a chicken sandwich. It was only fifteen miles to Denver City, where my family was waiting. Even my goofy cattle dog, River, would be there. I kept that in my head for the rest of the ride, as the wind just continued getting stronger. I arrived at the hotel and gave everyone a big sweaty hug. The day had been a slog, but the reunion made it worth it.

This rest day was almost like being at home on a Saturday. The kids woke up and did their screen time; then we had breakfast. We took River for a few walks. He was not a big fan of the hotel elevator. My brother-in-law, Javier del Castillo, also joined us. He was going to be my support vehicle for a little while, meaning I wouldn’t have to ride fully loaded.

It was tough to say goodbye to my family. I was busy getting my stuff together and fixing a flat as they were trying to get on the road as well. It was not the farewell the kids deserved, but I was already halfway done, as I kept assuring them. It was just me and Javier now. As he was packing the truck, we made plans to meet in Seminole, twenty miles away, for my first rest stop. The ride to Seminole was easy-breezy—this section of Texas Highway 214 seemed to be brand-new and mostly downhill. A couple miles outside of town, Javier passed me with an encouraging honk. He was waiting for me in Seminole, ready to fill my bottles with a jug of water he had brought from his home in San Francisco. He assured me it was the purest water I’d have on the trip. Who was I to argue?

From there, I was on U.S. 385 all the way to Andrews, passing at least 600,000 pump jacks. I was solidly in the Permian Basin now. After arriving in Andrews, we took Javier’s truck to get a couple plates of Nashville hot chicken. We finished the day dining on chicken, drinking beer, and watching the American Cornhole League World Championships on like ESPN 11, just like two roughnecks.

This was my first late start on the trip. I didn’t start riding until 11 a.m., since I had to do some bike maintenance first. Javier and I drove down to Midland to be at Peyton’s Bikes when they opened at nine. My tires were quickly balding, and I was in great need of a new set—1,750 miles of riding takes its toll. With a new set of tires and few tubes, we beelined it back to Kermit so I could get started. The entire day was spent on Texas Highway 115, also called Kermit Highway. Not one frog was spotted the entire day.

The ride started off similar to what I’d grown used to in the last few days, with rolling hills and pump jacks dotting the landscape. I knew the overall ride would have me losing five hundred feet of elevation, but I seemed to be doing a lot of climbing. That changed around twenty miles in, when, despite the wind, I started picking up on my average miles per hour. Javier waited for me every fifteen miles. Every time I would pull up to his truck to rehydrate, he was already pumping music and had cold water and fruit waiting for me. Now this was a bike tour! Halfway through the ride, the familiar scenery of green shrubs turned into sand dunes and tiny sunflowers. It was a welcome switch. With that and the celebratory vibe Javier was putting out at rest stops, it almost seemed like a day at the beach. When I arrived in Kermit, I realized that I was finally out of the Panhandle. It felt good to have West Texas in front of me.