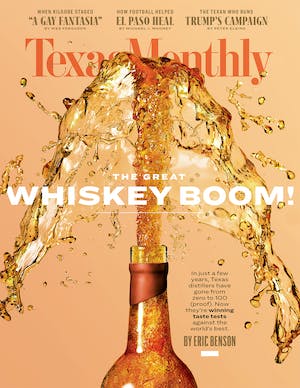 Two Amazon drivers were accused of stealing a dog from the front yard of a Parker County home while they were delivering a package.

An Austin man allegedly swung his girlfriend’s four-month-old puppy at her head after she tried to kick him out.

The Catholic Diocese of Fort Worth debunked the claims of a woman who said she saw apparitions of the Virgin Mary in Argyle; the woman then said she fabricated the miracle because she was possessed by demons.

A woman was caught on surveillance video using a power saw to break into a Sugar Land med spa, where she allegedly stole $1,000 worth of goods before driving away in a Mercedes SUV.

A Dallas man flew the plane that carried back to Texas the remains of his father, a pilot who was shot down 52 years ago in Laos.

A Williamson County man was arrested after he allegedly mailed a chocolate penis to a McLennan County Sheriff’s Office employee with whom he was having a long-running feud over a woman.

Prior to a deposition in Webster, an 83-year-old retired personal injury attorney slapped a plaintiff’s lawyer because he felt the younger man was being disrespectful.