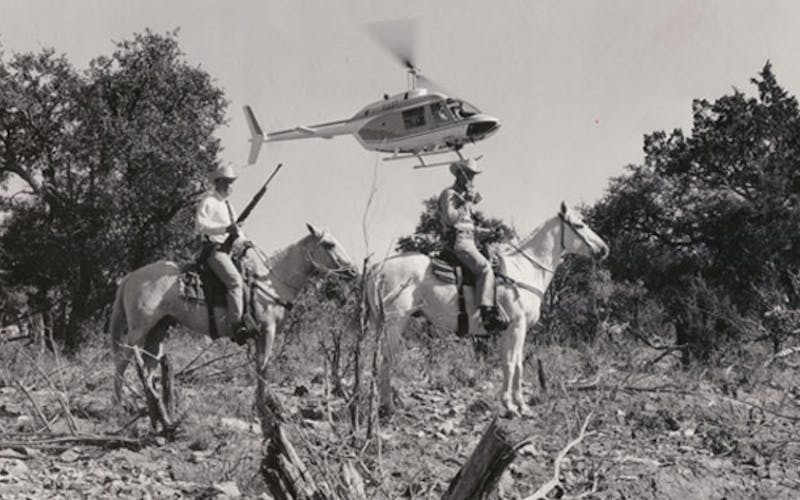 The Texas Rangers are an elite division of the state police with a storied history—some of it flattering, some not, and some just plain false—older than the state itself. The Rangers themselves date their history to Stephen F. Austin’s 1823 call for a small militia to defend his colony against Indians and bandits. The unit was dissolved after the Civil War, but later reconstituted chiefly as an Indian fighting force.

The Mexican Revolution marked a low point in the unit’s history, as thugs calling themselves Rangers dealt out brutal frontier “justice” in an effort to keep order along the Texas side of the border, most notoriously in the massacre of fifteen Mexican men and boys in the Presidio County town of Porvenir in 1918. Racial tensions were high along the Texas-Mexico border, and “suspected Mexicans,” most of them Americans, were often “summarily executed by hanging or shooting on the Texas side of the river,” according to a short piece by Ronaldo Hinojosa-Smith. “Local lawmen and vigilante groups did some of the killing, but it was the Texas Rangers—56 were operating in the Valley by 1916—whom Texas Mexicans feared the most.”

The legislature imposed reforms in 1919, and by 1935 the group had been consolidated with the state police under the Department of Public Safety, the arrangement that prevails today. The Rangers now serve as a kind of state level FBI, assisting rural authorities with murder investigations, and pursuing police corruption cases, among other crimes.

The unit’s distinctive circle on star badges (fashioned from an old Mexican five peso coin), cowboy hats, and white shirts remain the ultimate markers of prestige among Texas cops. Still, times have changed. In 1994, Robert Draper wrote about the clash of the Rangers’ myth and modernity, as the unit’s first two female agents—neither of whom had any investigative experience—were appointed, which prompted several celebrated veterans to retire in protest.

In 2007, executive editor Pam Colloff revisited the Rangers myth in a sweeping oral history, finding a modern outfit that these days relies less on the gun and more on the laptop, with an impressive record of cracking difficult cases.