More than a restaurant, Thai Fresh has been a neighborhood fixture in South Austin for twelve years. Its success is a testament to chef and owner Jam Sanitchat, who grew up in Thailand in a family of accomplished home cooks before moving to Austin to attend graduate school at the University of Texas. To make money while attending classes, she started teaching Thai cooking classes, which soon outgrew side gig status. Sanitchat added a farmers’ market stand and, in 2008, opened Thai Fresh.

Catering to an eclectic crowd of meat lovers, vegans, and gluten-free diners, Sanitchat serves Thai food, gluten-free baked goods, vegan ice cream, and more. And she continues to teach classes to Austinites hungry to re-create her Thai specialties at home.

And now, Sanitchat has added another role to her packed resume: cookbook author. Along with former Edible Austin editor Kim Lane, she wrote and self-published Thai Fresh: The Cookbook. Through a Kickstarter campaign launched in August 2019, Sanitchat raised more than $65,000 toward the book’s publication; the money supported printing the first run of three thousand copies. “I want this cookbook to be 100 percent from me,” she wrote in the Kickstarter proposal, explaining the choice to self-publish rather than publishing through a traditional press. “Something that is genuine. In the same way that cooking is art, I want this cookbook to be a piece of art; to be an experience, a cooking memoir. It’s not just a cookbook, it’s storytelling.” Austin photographer Jody Horton shot the book, while Julie Savasky of 508 Creative designed it.

Sanitchat’s experience teaching cooking classes serves her well when it comes to recipe development. Unlike many professional chefs who have an unrealistic concept of how people typically cook at home, Sanitchat has spent sixteen years answering every question and calming every hesitation home cooks may encounter with her recipes. She knows people are reluctant to fry at home and that browning garlic to the degree Thai cooking requires may give some cooks pause. In the book, she recommends a store-bought brand of Thai curry paste for nights when you can’t start from scratch (Maesri brand), and even brings on Austin winemaker Rae Wilson to recommend drink pairings with many dishes.

The main takeaway from Thai Fresh? Thai cooking is all about balancing “sweet, sour, salty, spicy, and bitter flavors.” “This five-flavor combo balance is ancient to our culture and how we understand food,” writes Sanitchat in the book’s introduction. “It’s the only way we approach cooking.” You can see this philosophy in dishes like Pineapple Fried Rice With Shrimp and Tom Kha soup. 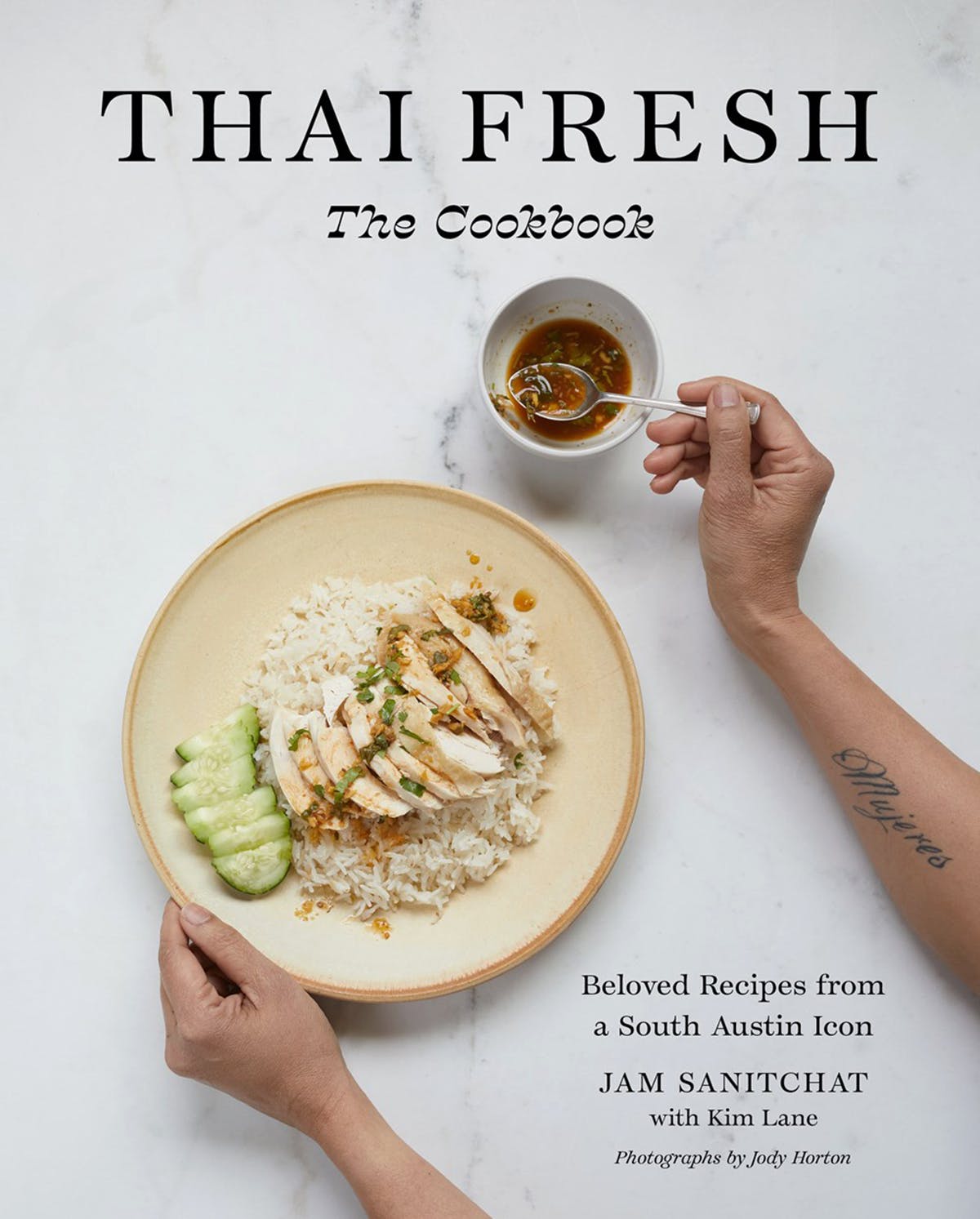 As for Sanitchat herself, she’s already on to the next project: her just-opened vegan ice cream shop, Gati, in East Austin, serving coconut-based ice cream in flavors like pandan leaf, tamarind candy, and Thai tea. And with as much as she has going on, she’s going to need a serious grab-and-go meal—like this riff on breakfast tacos that wraps a Thai omelet in a Central Texas flour tortilla.

Thai Omelet is another dish that’s dear to my heart. Growing up, our family ate it a lot, and it’s one of the first things I learned how to make. Contrary to the name, it’s not a breakfast item in Thailand; we ate it most often at dinner. This dish pairs well with other foods on the table and features an omelet cooked well-done; some like theirs more well-done than others, and some like their omelet fried by adding a little oil and letting the edges crisp. This is the version I like best, but experiment and find out what suits you! Even though Thai Omelet is a classic Thai dish, I included it in the Fusion chapter because, instead of serving it with rice, I wrap it in warm flour tortillas, which are not found in Thai cuisine. I created this version when I was a vendor at the local farmers market trying to come up with a breakfast item to sell before the lunch crowd hit. Since I’m in Austin—the breakfast taco capital of the world—I figured putting my beloved Thai Omelet in a tortilla just made sense.